Meta Quest 3 GPU could offer a 2.5x boost in performance

Qualcomm’s new flagship chip could be the blueprint for the Meta Quest 3’s SoC. The first benchmarks are promising.

Last week, Qualcomm introduced the Snapdragon 8 Gen 2, which will power premium Android smartphones starting next year. The second-generation Snapdragon XR2, also known as Snapdragon XR Gen 2 or “Project Halliday,” is reportedly based on this SoC. It is also rumored that this chip will be integrated in the Meta Quest 3, which will be released in 2023.

With a refresh of the XR2 chip, advances of three SoC generations could find their way into Meta Quest 3 and other upcoming VR headsets.

According to these numbers, the new GPU gets more than 2.5 times as much FPS in the benchmark (89 vs. 226). However, the average power consumption also increases by almost double (3.8 vs. 7.5). 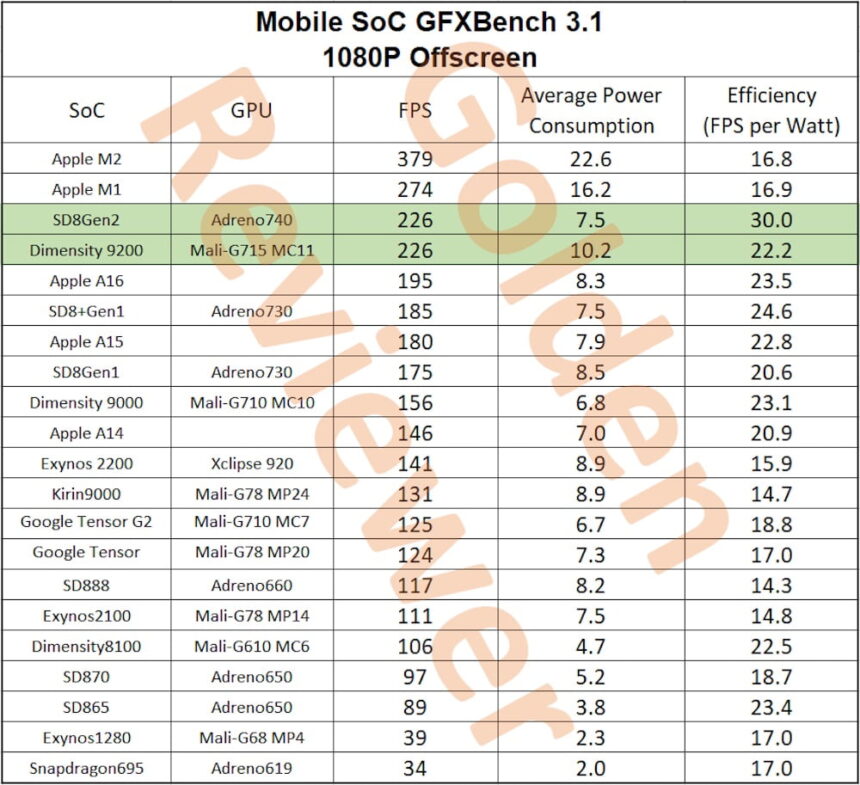 The following table allows us to compare the GPU performance of the Snapdragon 865 and Snapdragon 8 Gen 2. | Image: Golden Reviewer @ Twitter

Does this mean that the Meta Quest 3 will compute 2.5 times as fast as the Meta Quest 2? That depends on how much Meta throttles the CPU and GPU’s performance to prevent overheating. The Snapdragon XR2 Gen 1 has been downclocked heavily for reasons of thermals and battery consumption. The CPU runs at half the clock while the GPU is only slightly downclocked.

The degree of throttling also depends on the cooling solution used. This is in turn limited by the targeted weight of the headset.

Apple chips play in their own performance class

The Snapdragon XR2 Gen 2 has not even been announced yet, let alone announced for Meta Quest 3. Therefore, direct conclusions about the performance of the upcoming VR headset should be taken with a grain of salt. XR leaker Brad Lynch at least reports that his informants are excited about the performance that Project Halliday offers.

However, we should not expect a gigantic leap in graphics. The additional performance could be used up by hardware features like high-quality mixed reality or higher display resolution. VR games will still not look as good as PC VR or Playstation VR 2 titles.

The comparison with Apple’s M-series SoCs, which top the list, is also interesting. For example, the M2 chip, which is reported to compute in Apple’s first mixed reality headset, is 1.6 times faster than the Snapdragon AR Gen 2 or 4.25 times faster than the Snapdragon 865. But there is also the question of what clock the chip runs to keep heat generation and energy consumption in check.