Working in VR with Quest 2 is not (yet) fun – study

According to an initial study, working in virtual reality lowers productivity and promotes migraines and anxiety. Nevertheless, the immersive office has potential.

Researchers from Coburg, Cambridge and Primorska Universities and Microsoft Research are comparing work in virtual reality with everyday life in a real working environment. The team is investigating the effects on people’s physical and mental states. An initial study gives the immersive office a poor assessment.

Study: Working in virtual reality for a week

For the study, eleven men and seven women were asked to perform their usual office tasks in a VR environment for one week. However, one man and one woman each dropped out of the experiment on the first day. They complained of migraines, nausea and anxiety in the VR environment.

To be able to make a comparison, the first half of the remaining subjects began the experiment in virtual reality. The other half began their work simultaneously on the desktop computer. They then swapped places. Each subject completed a workload of eight hours on five consecutive workdays with a 45-minute lunch break.

The test subjects used a Meta Quest 2 in standalone mode for VR work. All comfort settings were adjusted to the individual needs of the participants, and there was also an introduction to how the VR headset works. The research team equipped the physical workplace with conventional office PCs and curved monitors. 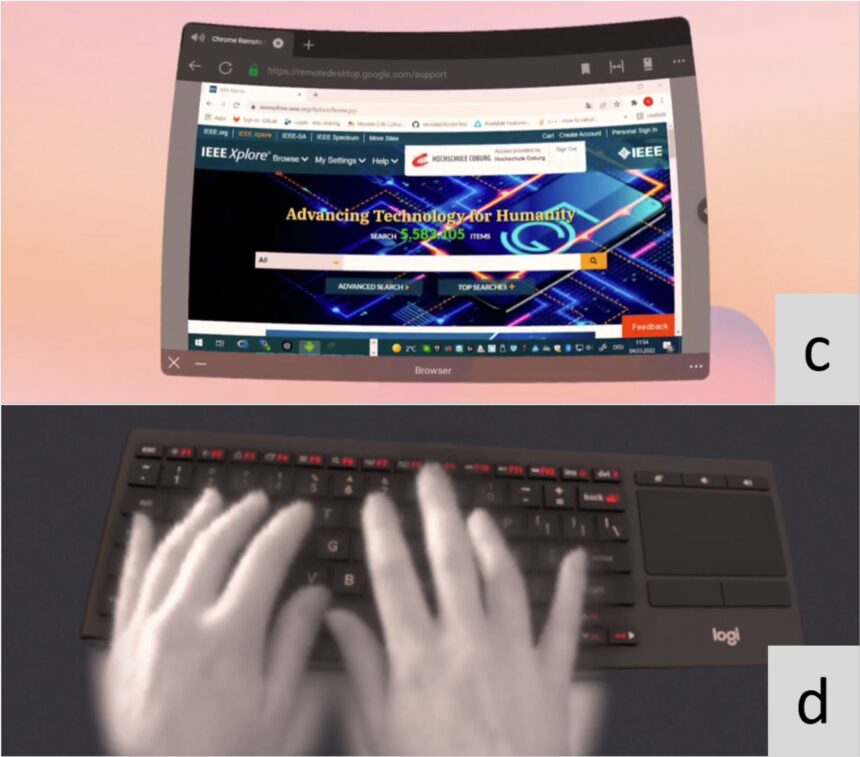 The view through the VR headset: In the virtual work environment, the test subjects work on a similar set-up as in reality. | Image: Coburg University

In the VR environment, the test subjects saw a virtual curved monitor of similar size. The same keyboard with touchpad was used in both environments. The participants were intentionally not equipped with a high-end VR system. The researchers wanted to create a comparable situation between the VR environment and working with an ordinary physical desktop setup for office applications.

The two work environments in VR and in reality. | Bild: University Coburg

Before starting work and at two-hour intervals thereafter, the participants filled out questionnaires. In these, they gave their subjective assessments of the task load, the user-friendliness of the system, perceived productivity and workflow, frustration or general well-being.

Study: Working in VR leads to disturbing levels of discomfort

On average, subjects perceived workload to be higher in VR, although the nature and scope of activities did not differ in the two environments. Ease of use, workflow and perceived productivity also scored better in the physical environment. 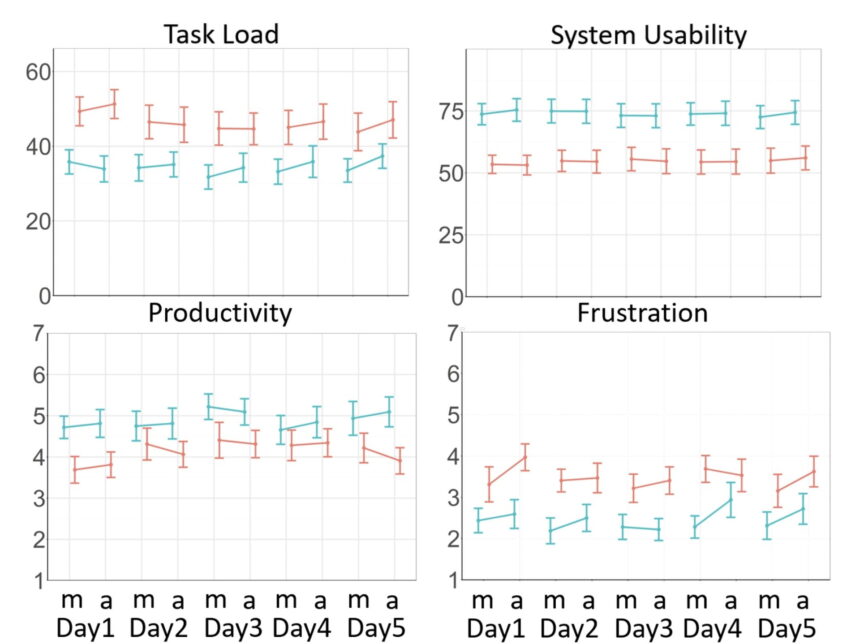 Working in the VR environment (red) performed worse than working in physical reality (green) in most cases. | Image: Coburg University

Working in VR caused significantly more moments of frustration, anxiety and discomfort, as well as greater visual fatigue among the participants. Overall, the researchers found a high level of simulator sickness and below-average usability ratings.

The main cause of the participants’ anxiety was the fact that in VR they could no longer perceive the presence of other people in the physical space.

On a technical level, participants criticized the Meta Quest 2’s low peripheral vision. The keyboard’s tracking also needs improvement and was cited as a reason for lower productivity together with the Quest 2’s low resolution. In addition, many participants criticized the low comfort of the VR headset. It is too heavy and the pressure on the face is unpleasant, they said.

Activities that were actually easy were perceived as tedious in the VR environment. Some participants were bothered by having to take off the VR headset when eating or drinking because they were afraid of spilling something. They also missed the possibility to briefly write something on paper.

According to the research paper, however, there are indications that negative initial impressions and initial discomfort can be overcome. The increased feeling of fatigue in VR could be related to the fact that the test subjects do not work continuously for so many hours in their normal everyday lives.

Five participants indicated after the end of the experiment that they had become accustomed to wearing the VR headset over time, and two of them eventually forgot about it. Nine people found the isolation in virtual reality positive, as it facilitated concentration on the task and avoided distractions from the environment.

Four of the participants specifically mentioned wanting to integrate the VR headset into their normal workday on a trial basis. Overall, however, only three participants preferred the VR environment.

Meta is probably already aware of many of the shortcomings mentioned. In addition, the technology is still at an early stage and many of Meta Quest 2’s features are only a first taste of what will be possible in the future.

Meta’s VR office, for example, should be much more than a single virtual monitor. Meta already showed an early version of the “Infinite Office” in 2020, in which multiple virtual screens are also used via hand tracking (see video above). The pass-through mode also keeps the real environment in the user’s field of vision.

Meta will incorporate many lessons learned from the Quest 2 into the already announced VR headset Cambria (info) to improve comfort and the user experience. Office applications are at the top of the priority list. According to Meta CEO Mark Zuckerberg, Cambria or similar devices could one day replace laptops and change the classic work environment. Apple’s headset is also believed to be able to digitally augment the Mac display, so it will likely serve productivity.

A lot will happen in the field of immersive working in the coming years. That’s probably how the research team sees it, too. According to the scientists, the study is intended to create a basis for further research. Above all, it shows current deficits and possibilities for improving the work experience in VR and is therefore to be understood more as a snapshot of the present situation than as a fundamental critique. In addition, there are other, higher-quality VR headsets on the market – a comparative study with alternative hardware would be interesting.