Meta Quest (2): This VR cooking game has no equal

Here, you travel through time and visit three eras and cultural areas, where you prepare centuries-old dishes in historically authentic kitchens using the ingredients, utensils, and techniques of the time. The development of the VR game was preceded by historical research.

Another special feature, in addition to the time travel and historical authenticity, is that cooking is about accuracy rather than speed. The more precisely you prepare the food, the better your cooking will be rated. This makes cooking feel structured and relaxing, unlike the chaotic kitchen fun Cook-Out, for example.

Your clients are spirits from ancient Greece, ancient China and the lost Mayan civilization, who pass on their traditional recipes to you. The ghosts are spoken by native speakers, which adds realism.

Your first stop is an Athenian kitchen from the 5th century BC, where you’ll learn how to prepare pita flatbread, mulled wine, and souvlaki meat skewers. 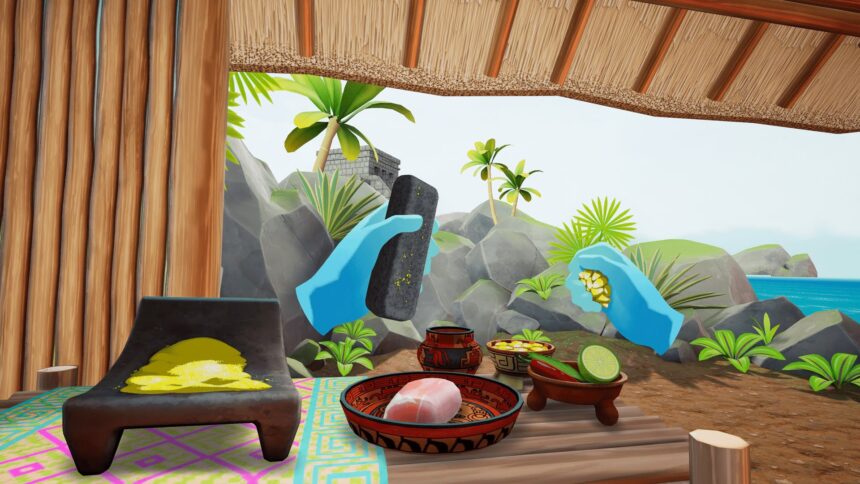 The environments, kitchens, and ingredients were designed colorfully and with great attention to detail. | Image: Schell Games

Then you travel to the Chinese Empire, more precisely to the era of the Song Dynasty (960-1279 AD). Here you will cook an oolong tea, steam a fish and prepare a fruit plate. Finally, the VR game will take you to the Yucatán Peninsula in the 16th century, where you’ll cook traditional dishes like xec and mukbil pollo in a typical Mayan kitchen for the Hanal Pixán holiday.

The VR game is meant to entertain and educate. “In-game cooks will learn about the culinary traditions of past cultures and how geography and history influenced the culinary tastes of past civilizations,” promises the studio responsible. Schell Games is known for VR games like I Expect You To Die 1 & 2 and Until You Fall. It is currently working on a VR port of Among Us.

You can download a PDF of all the recipes on the VR game’s official website if you want to practice for real already. However, the authentic cooking experience is only available in virtual reality. “We had to modify the recipes because some of the ingredients and preparation methods no longer exist,” the studio writes.

Lost Recipes will be released on January 27, 2022, exclusively for Meta Quest 1 & 2. The VR game costs 14.99 euros. You can add the VR game to your wishlist in the Oculus Store right now.