The “Logitech Chorus” headphones for Meta Quest 2 simply hang over the ears. The concept is known from Valve Index and HP Reverb G2 with great success because it offers high wearing comfort with good sound.

The Valve Index and HP Reverb G2 VR headsets have been providing a free, airy-cool sound experience with good audio for years. Both PC VR headsets feature Valve-designed “off ear” earpieces that float freely above the ears.

This prevents the head from heating up even more when brooding under the VR headset. Apart from the somewhat weaker bass, the sound is good despite the small distance to the ears. Valve has experimented with the tuning of the open design for a long time.

Owners of the Quest 2 enjoy a similar wearing comfort out of the box since the sound comes from holes in the headband as standard. However, the result sounds a bit thin and tinny, especially since it is not exactly adjusted to the position of the ears. Many Quest 2 users, therefore, prefer to connect their headphones to the 3.5-inch jack.

Logitech Chorus: Freedom for the ears

As an alternative, Logitech now introduces the free-hanging “Chorus” earphones, which you can connect directly to one of the Meta Quest 2’s three official headbands. 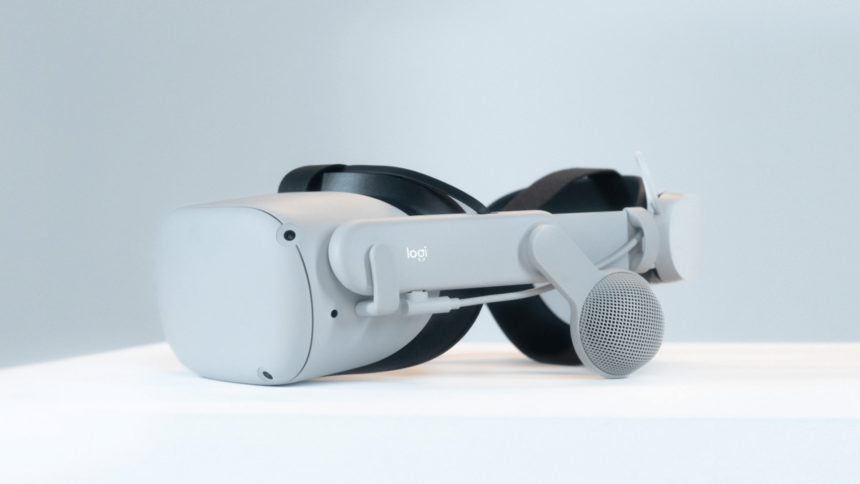 Once attached via USB-C, the earpieces float freely in front of your ears. A swivel joint ensures the right position. The design is also open here; according to Logitech, users can expect a clear, natural sound. The mechanical mute switch is a useful detail: Folding the earpieces all the way back deactivates the sound.

Another advantage is the USB-C passthrough. One plug connects the accessory to the USB port of the VR headset at a 90-degree angle. You can then connect the charger to the second USB port of the headphone bracket. The external battery in the Elite strap can also be used. However, the USB connection to a virtual reality PC via link cable is not supported.

An important detail is that the earphones stay securely in place, according to Logitech. That is not always the case with Valve’s model. My swivels on the Index wore out pretty quickly because the heavy earphones add quite a bit of weight. Logitech’s Quest 2 headphones also add some weight to the VR headset. In total, the Chorus system weighs 182 grams.

You can now order Logitech Chorus from the official store for around $100. By the way, the floating headphones are not a new idea as an accessory for Meta Quest 2. There are already models from numerous other manufacturers in large online stores. Often, these are products imported from China from unknown brands.

Correction: An earlier version of the article stated that the link cable to the PC is supported. This information was wrong and has been corrected.