Meta has acquired Luxexcel. The Belgian-Dutch company provides an important piece of the puzzle for Meta’s first AR headset.

Founded in 2009 and based in Turnhout near Antwerp, the company specializes in 3D printing complex corrective lenses and has developed its own machines for this purpose. The lenses are used to correct visual acuity and encapsulate waveguides. This is an AR display made of glass or plastic that directs light from a projector into the eye.

Luxexcel previously worked with a number of well-known waveguide manufacturers, including Lumus and WaveOptics. Meta is also rumored to have collaborated with Luxexcel for Project Aria. With the sensor glasses developed as part of this research project, Meta wants to find out what data AR headsets need to collect about the environment to offer smart functions such as AR navigation.

Belgian business newspaper De Tijd was the first to report on the Luxexcel acquisition, which was said to have been completed in secret weeks ago. On Wednesday, Meta confirmed the acquisition.

“We are delighted that the Luxexcel team has joined Meta. This extends the partnership between the two companies,” Meta stated. 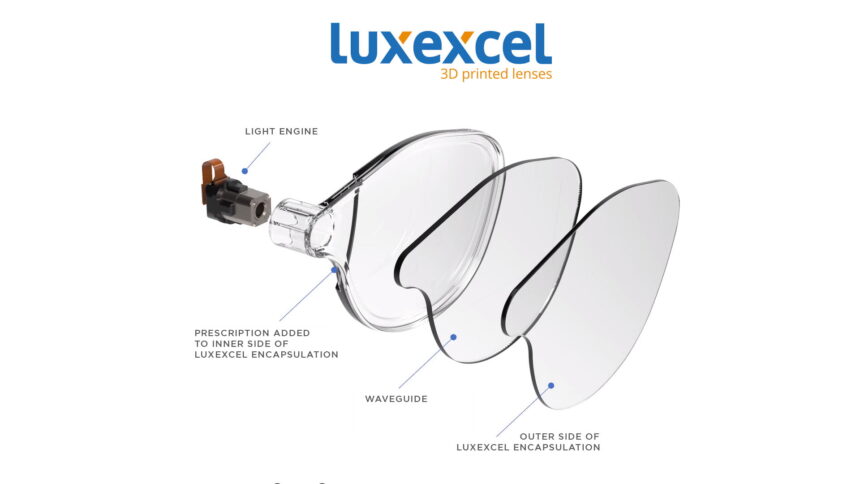 A possible implementation of Luxexcel’s corrective lenses: the printed lenses are used both for vision correction and as a protective cover for the waveguide display |. Image: Luxexcel

According to the newspaper, Meta is said to have paid a “very spicy” price for the company. Luxexcel itself is not the only one to benefit from the takeover: The Flemish government has invested aggressively in the company and is one of its largest shareholders.

Luxexcel specialized in 3D printing of corrective lenses since 2015. In 2018, former Solidscape CEO Fabio Esposito took the helm and continued that focus. A 2019 article highlights the technology and Esposito’s goals in detail.

According to rumors, Meta wants to launch the first AR headset intended for the mass market in 2026. Luxexcel could supply the correction lenses needed for this, which are likely to be more cost-effective than other solutions if produced in large quantities.

The acquisition follows numerous others by Metas and other large companies looking to secure key AR enabling technologies early on.

Display expert and industry observer Karl Guttag, who also discusses Luxexcel’s technology on his blog, is critical of the acquisition.

“This continues a trend of companies giants like Meta, Apple, Google, and others, including Snap and Vuzix, buying up the supply chain for AR components. This buying up of fledgling technologies is likely to hinder the long-term development of the AR market.”