Magic Leap 2: This is what the first reviewers say

The first independent reports about the Magic Leap 2 are positive. Especially the wider field of view and the dimming technology get praise.

The first Magic Leap was developed for consumers and was launched in 2018. The AR headset did not live up to the hype, but created the basis for Magic Leap 2. Unlike the first Magic Leap, however, the second device will no longer be sold to end users. Magic Leap 2 is specially designed for business customers and professional users.

The company does not rule out a return to the consumer market. Until then, though, the technology must become leaner, cheaper and better.

A number of US journalists were able to try out the Magic Leap 2 under controlled conditions and for a limited time. I summarize their impressions below.

Here you can learn more about the technology of Magic Leap 2. The controller also offers a technical innovation.

The Verge: “A significantly improved device”

Magic Leap 2 is not a revolution, but it is a noticeable improvement, writes Adi Robertson in her hands-on.

The device now weighs 248 grams instead of 316 grams like its predecessor and sits better and more stable on the face than almost any other augmented reality glasses Robertson has tried so far. She was allowed to wear ML2 for 30 minutes at a time, which is quite a significant amount of time.

The lighter weight and greater convenience compared to similar devices are due to the outsourced puck-shaped computing unit that also distinguishes the Magic Leap 1. The downside, Robertson says, is that you’re walking around with a long cable connected to a strange-looking computer.

In the evenly lit demo room, the holograms would have looked great by current AR standards. The digital overlays are still a bit transparent, she said, but sharp and vibrant, and text is easy to read. 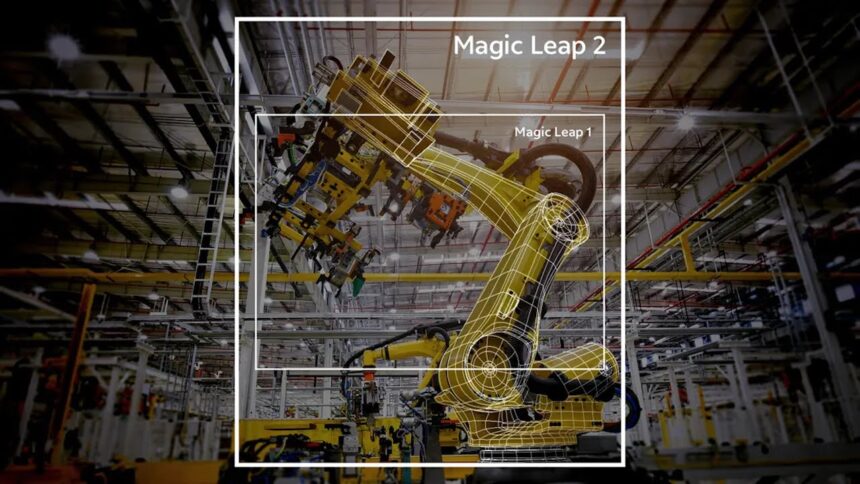 The new dimming function can almost completely block out the surroundings. Bright light would still shine through, but it would be difficult to see objects behind the veil. AR objects are anchored stably in space.

Robertson cites the fact that the view is constantly slightly obscured and the user’s eyes sometimes disappear completely behind dark glass as potential disadvantages of these lenses. Magic Leap 2 also offers only one focal plane, unlike its predecessor.

The new controller has built-in cameras that help with tracking and works well with simple point-and-click interfaces, according to Robertson.

She praises the larger field of view, the limitations of which are less noticeable than on Magic Leap 1 and Hololens 2. She says the windowed effect is still visible, but virtual objects are less likely to be cut off. At the same time, the glasses-like edges of the headset would obscure part of the peripheral vision, giving the impression that a physical object rather than the digital field of view is blocking the view.

Robertson describes the AR glasses as a “really improved gadget” based on the short demo, offering a “much better field of view.” The Magic Leap 2 represents progress in addressing a major drawback of AR glasses, she said.

Some 35 partners are currently testing the device, which is expected to be less expensive than the Magic Leap 1, which costs just under $2,300.

Scott Stein also praises the larger field of view, which is wider than the predecessor or Hololens 2, but still not perfect.

What impressed Stein the most is the new dimming technology. It can darken the whole room or parts of it, for a stronger contrast or focus on AR objects. The intensity of the dimming can be adjusted: from a slight darkening to near darkness.

The darker the environment, the stronger the holograms would stand out. Objects behind them are practically invisible.

Magic Leap 2 is significantly smaller than its predecessor and more compact than HoloLens 2, he said, but it still needs a large computing unit that hums audibly. The improved eye and hand tracking was not demonstrated to Stein.

Android is now used as the operating system, unlike Magic Leap 1, which used the in-house developed Lumin OS. Android should make it easier for developers to create content for the AR glasses.

Stein found it negative that, unlike Hololens 2, you can ‘t wear regular glasses under the device. For that, you need insertable corrective lenses.

Stein concludes on a positive note: “I feel like the Magic Leap 2 is a small but important step for a company that, like many others, wants to solve the AR glasses problem.”

Dean Takahashi was “quite impressed” with the AR headset’s technical advances after his hands-on. He said the larger field of view is “significantly better” and makes it less necessary to move the head forward and back. The image is sharp and texts are easier to read without straining the eyes.

Takahashi calls dynamic dimming a big improvement, as AR glasses can now be used in brightly lit rooms or even outdoors to some extent. The new hardware feature, he said, can dim the entire environment to display sharp, solid and brightly lit AR content. This is done automatically and, if necessary, only in segments of the field of view.

Takahashi further praises the new controller tracking, the quality of the 3D audio solution and the reduced weight. The device is half the size of Magic Leap 1, he says, and the head mount is also easy to pull on and ensures a secure hold. Battery life has also improved, from two hours to 3.5 hours.