Magic Leap 2 has a fraction of the hype of its predecessor, but could still be a fine piece of technology and perhaps the best AR glasses on the market.


With the first Magic Leap glasses, the eponymous company gambled away countless sympathies and almost went bankrupt. Too much hype, false promises, disappointing technology – there has been little positive about Magic Leap recently.

CEO Rony Abovitz left the company in Mai 2020 after COVID happened. Now, the former Microsoft manager Peggy Johnson should now succeed in turning things around – with a focus purely on the industry and Magic Leap 2.

At the SPIE.AR.VR.MR & SPIE PhotonicsWest conference, Kevin Curtis, who is responsible for optical systems at Magic Leap, presented the technical specifications of Magic Leap 2. 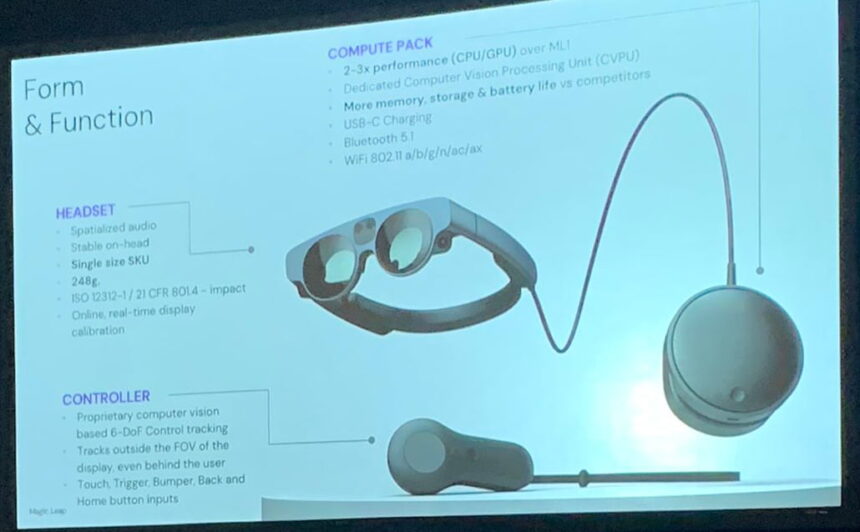 Magic Leap 2 could be an excellent AR headset and technically ahead – unlike the previous model. | Image: Magic Leap via Nataliya Kosmyna

Like the first-generation glasses, Magic Leap 2 relies on an external feed in the form of a compact pocket computer and a 6-DoF remote control. The remote control should still track precisely outside the field of vision of the glasses – that was a minus point with the first model.

The pocket computer with CPU and GPU is said to offer two to three times the computing power of the original model. The system consisting of glasses, a computer, and the controller has access to a total of 18 sensors for tracking and environment detection.

Magic Leap 2 has particularly improved in optical tracking: There is a computer vision processor in the pocket computer, and the remote control is now tracked optically instead of electromagnetically. At around 250 grams, Magic Leap 2 is also about 60 grams lighter than its predecessor.

Magic Leap 2 also increases the field of view: The diagonal field of view is expected to increase from around 50 to 70 degrees, horizontally it is 45 degrees and vertically 53 degrees.

A new feature of the display technology is the segmented local dimming of the image, in which individual AR elements in the field of view are displayed brighter so that they stand out better against a bright background. Local dimming works with the integrated eye-tracking system at 120 Hz with a contrast ratio of 100:1.

The light transmission of the lenses can be adjusted between 22% and 0.3% for an almost black background. According to CEO Peggy Johnson, this innovation should even make VR applications possible. 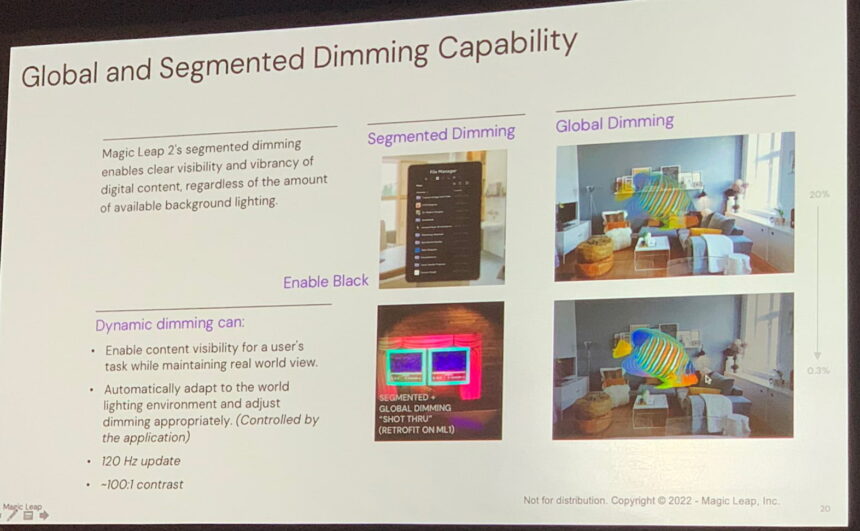 Global and segmented dimming of the image should improve the visibility of AR displays in bright environments. | Image: Magic Leap via Nataliya Kosmyna

The better technology will be reflected in the price: According to Peggy Johnson, Magic Leap 2 will be “slightly more expensive” than its predecessor, which was around $2,000. Due to appearing by mid-2022, the device will comply with the EN 60601-1 European standard for medical electrical equipment.