Kickstarter goal reached, Quest support could be months away

Regarding the announced Quest support, which is also listed among the “Stretch Goals” that are only available when a certain amount is reached (an explanation is still pending), the company does not want to give an exact time frame: “We believe we have found a way to achieve it and support is now in development. It may take a few months while the specific time cannot be promised.”

VR treadmill specialist Kat VR announces the “Kat Walk C 2”, a new treadmill that you can also sit in. It is supposed to support all major VR platforms.

According to the manufacturer, the Kat Walk C 2 is optimized for VR gaming and offers a natural 360-degree freedom for many movements. Players can walk, jog, jump or squat, for example.

All VR games with free locomotion are supported. As a treadmill runner, you only have to put on a kind of lap belt so that you do not topple over to the front, especially when running faster.

Compared to its predecessor, Kat VR promises many improvements: Walking should feel more natural, be easier to learn and less strenuous. For this purpose, the included special shoes have been reworked. There is now an optical sensor in their sole, comparable to a computer mouse (SPI ≥ 1200).

Kat VR promises a 1:1 detection of even the smallest foot movements in 360 degrees with a latency of about ten milliseconds. The body orientation is supposed to be detected with an accuracy of ≤ 0.3°, and the precision of the distance covered is supposed to be around twelve millimeters and less.

Running speeds are detected analog and according to the game. In games with binary speed levels (walking, running), the treadmill automatically differentiates. In general, the speed settings can be personalized.

So-called “strafing” (moving sideways while looking forward), which is typical for video games, is now supposed to be supported as well as walking backwards. Kat VR promises that really all natural movements work, like a deeper squat and even swimming, flying and lying down. The Walk C 2 feels “like an exoskeleton” that works in harmony with the body, the company writes.

Kat VR promises that Kat Walk C can recognize pretty much all common locomotion modes and postures. Of course, these need to be supported by the game accordingly. | Video: Kat VR

The Kat Walk C2+ variant has an integrated haptics module that triggers vibrations when steps are taken and is thus supposed to improve the running experience. Developers can address the haptics module like vibration units in the gamepad – the treadmill then reacts accordingly to explosions in the game environment, for example.

The seat integrated into Kat Walk C2+ is designed to turn the treadmill into a vehicle simulator. | Image: Kat VR

In addition, the C2+ offers an integrated folding seat. The treadmill automatically detects whether the person is standing or sitting on the treadmill.

In seated mode, Kat Walk C turns into a “multifunctional vehicle hub” that transmits the vibrations of cars and airplanes, for example. The treadmill is said to be able to simulate additional haptic effects on virtual roads that do not occur natively in the game.

Kickstarter in May, support for PSVR and PCVR, Quest in development

According to Kat VR, Walk C supports Sony’s Playstation VR, SteamVR and Oculus Home (PC). Support for the Quest platform is in the works, the manufacturer does not name a release date yet.

Kat Walk C2 will be sold on Kickstarter starting May 14. The basic model will start at around 700 US dollars plus a delivery fee for the first buyers. The standard price on Kickstarter is $1,000. The Plus upgrade for VR haptics costs 200 US dollars. Kat VR plans to start shipping in July 2022. 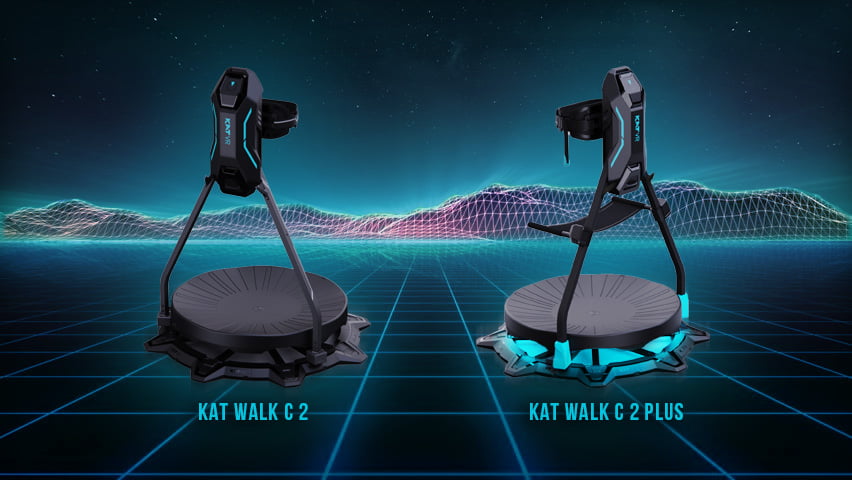 POPULAR
1
Playstation VR 2: Are we in for a price shock?
2
Meta Quest 2: immerGallery – VR photo gallery app review
3
Playstation VR 2: Every VR game announced so far
4
Google Maps becomes more immersive and gets an AR upgrade
5
Pico 4 Pro: What we know about the professional device