In Rogue Ascent my index finger becomes a deadly weapon

Who needs controllers when you can directly turn your hand into a gigantic energy weapon? The VR game Rogue Ascent makes that possible: Simply put on the VR headset and extend your index finger. Meta Quest 2’s hand tracking does the rest: Instead of your hand, you suddenly see a laser cannon, a sniper rifle or a galactic poison syringe.

Even in this early beta, Nooner Bear Studio makes such clever use of the Quest 2’s hand controls that it took me about two hours to tear myself away from it.

The first VR shooter played only with your hands

The best idea is that you do not pull the trigger yourself, but shoot automatically. This may not sound intuitive, but it fits the concept perfectly. You simply aim your “finger gun” at an alien or a flying drone and the bullets will automatically fly in their direction. Depending on the weapon, the automatic aiming sometimes helps more, sometimes less.

Two-handed shooting is also possible. One challenge is the smart tactical reloading: If you tilt your index finger up, the gun rotates around a finger, just like in a Western. Ssssmoking! Of course, it all looks wonderfully stupid from the outside.

You need to escape from the space station, which is overrun by aliens and robots. However, not all procedurally generated floors are ready yet. After a while, I had already looted all available rooms and could not complete my escape. Moreover, the enemies have offered too little resistance so far. It’s best to start on the highest difficulty level to be challenged a bit right away.

The game’s potential is already evident in the current beta. It has great features, for example a well thought-out wrist menu or a clever teleport mechanic: The levels are divided into square fields. If you aim at a square with your open palm, you whiz from square to square in a split second. This way you can outsmart guards or surveillance cameras in a flash.

There is no smooth locomotion. However, within the squares the team has already found the ideal mix for some real virtual reality movements: Some nasty ricochets force you to bend your knees or do a sideways lunge. Thanks to the space-filling movement, you can even sneak around the corner a bit on your real-world pitch to eliminate dangers detected via scan.

I felt pleasantly active while playing, but didn’t break a sweat as much as I would with real VR fitness with the Quest 2. Thanks to the comfortable teleportation, even VR beginners with sensitive stomachs shouldn’t experience motion sickness. 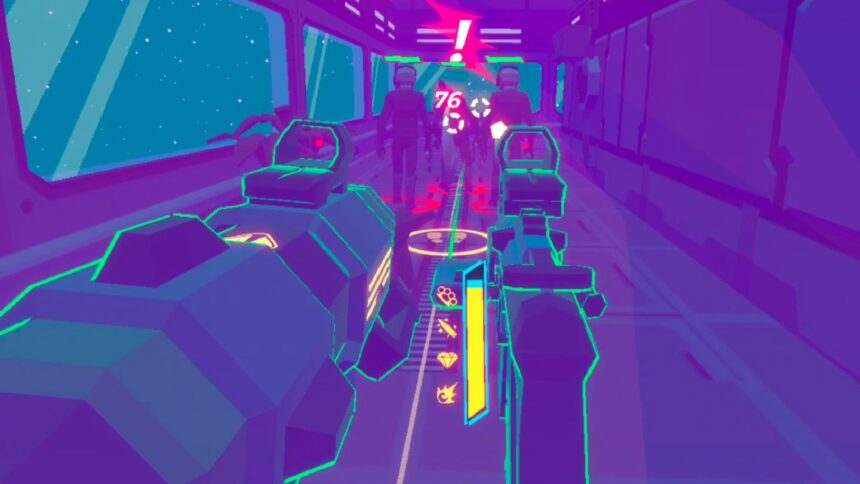 Although support for Meta’s better hand tracking 2.0 will only follow later, I have hardly had any problems with the controls so far. There were only brief lapses when I crossed my arms in the heat of the moment. In rare cases, my weapon hand was not recognized quickly enough.

Overall, however, I managed much better than in the already fascinating hand tracking games Unplugged or Hand Physics Lab.

For a change, I give away perks for fire and poison damage, as well as a temporary slowdown. Alternatively, you can buy or sell weapons for in-game currency. However, the best weapons can be found in scattered treasure chests.

The full version should offer more mission types and boss fights. There are special missions like a VIP kill, but the eternal uplink defense against a horde gets boring quickly. Despite its unfinished state, Rogue Ascent is well on its way to becoming my favorite handheld tracking game.

Rogue Ascet is available for about $20 from the Meta App Lab Store.