In Finger Gun, the name says it all: your outstretched fingers become revolvers via Quest 2 hand tracking.

Finger Gun is one of the first shooters to be played using only hand tracking: Simply extend your index finger and your hand becomes a firearm. Meta Quest’s tracking cameras (2) make it possible.

At least head-on in front of the VR headset, the cameras detect hands and turn them into pistols, shotguns, and miniguns. I can even mime the gunslinger with both hands at the same time.

The similarly designed Rogue Ascent came before Finger Gun. Nevertheless, the western game is one of the first “finger shooters” in the App Lab Store. So Finger Gun isn’t really finished yet. Nevertheless, I’ve already taken a look at Miru Studio’s game.

The look of the shooting game is very reminiscent of the VR classic Space Pirate Trainer. No human gunslingers appear at the edge of a cliff: Instead, all sorts of steampunk drones buzz over the precipice and shower me with slow, glowing projectiles.

Similar to Space Pirate Trainer, my calves were still monstrously sore days later. The culprit was the constant ducking under projectiles. Alternatively, you can try side lunges. But you should definitely plan for a little workout and a sweaty Quest.

The biggest feature of Finger Gun is that I don’t hold a controller in my hand. Instead, I shoot with my outstretched index fingers. Unlike when I was a kid, I don’t yell “Bang, bang” when I do this. Still, it looks pretty stupid to outsiders.

Since the index finger already serves as the barrel, it can’t press the trigger. Instead, I stroke the side of my hand with my thumb to shoot. After all, the wondrous fantasy weapons of my instructor and armorer have their triggers at the top.

Unfortunately, the mechanics quickly become my downfall in terms of gameplay. The constant swiping of the thumb irritates the tracking over and over again. The weapons suffer from jamming much more often than their auto-firing counterparts in Rogue Ascent.

In addition, there are constant warnings when my hands stray just a bit from the tracking radius of the four front cameras. When aiming with a rear sight, the game also complains: “Shoot from the hip” is the motto here. I am not allowed to aim directly at my opponents. A light aiming aid usually directs the bullets to the drones whizzing through the air.

In the end, the fight against the tracking is regularly just as challenging as the fight against the flying tin buckets. This is especially true in the boss fights. There, a grappling hook is additionally used, with which I tug at the enemy’s weak spot. The gesture to throw out the rope is sometimes simply lost in the wild mix of shooting and ducking. 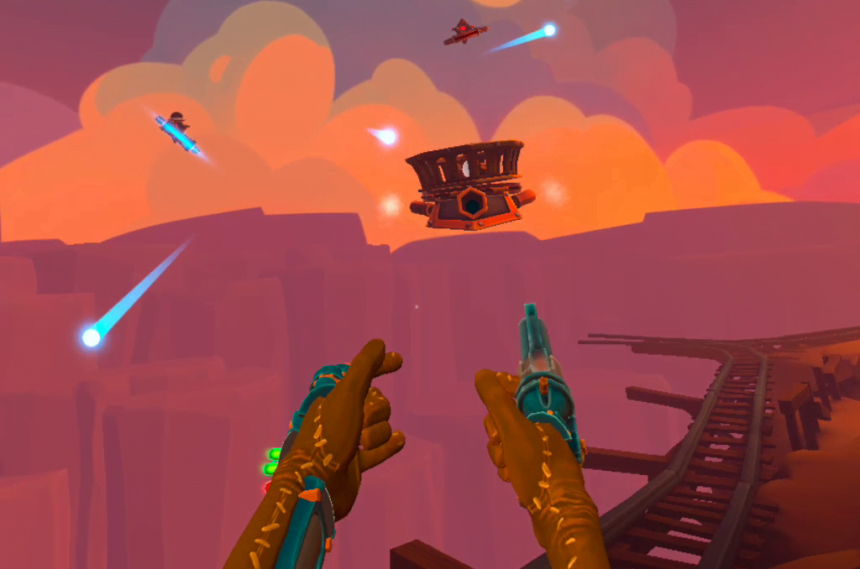 The upgrade compartment on the left arm gives you extra weapons or sustained fire for a short time. | Image: Miru Studio, MIXED

On the way along the canyon, multi-level perks provide additional motivation: extras like electric shocks or an explosive harpoon make the fight easier. However, the additional snatching of the extas complicates the action unnecessarily. First I aim the harpoon at the capsule, then I put the extra I got here into the wrist.

All of these hand movements overwhelm Quest 2’s hand tracking. From my perspective, it would make sense to simplify the hand control significantly. I’m curious to see how the game fares on the planned Meta Cambria, which is supposed to offer better hand tracking.

The lack of classic duels in the style of old cowboy movies is also a bit of a shame. The robot drones with their silly rotating tin hats only exude a bit of Western flair. I am, however, grateful for the studio’s groundwork in hand tracking. Despite all the teething problems, it is extremely fascinating to see my hands suddenly turn into weapons in virtual reality.

Finger Gun is available in the App Lab store for around $15.