Hellsweeper VR combines artistic movements with weapons, swords, and magic. I tested the game at Gamescom 2022.

Hellsweeper VR promises “the craziest moves in VR” and aims to feature wall-running, power-sliding, backflips, bullet-time and more. Coupled with waves of enemies from all directions and fast-paced gameplay, the VR game would actually be predestined to give my stomach a real challenge. I was allowed to undergo a short stress test at Gamescom 2022.

Contrary to my reservations, Hellsweeper VR plays pleasantly smooth despite the high speed. I had no problems with motion sickness. Admittedly, I only experienced simple flips and jumps from the crazy moves in the demo. However, quick spins, sprints, or melees in all directions played very smoothly.

The nimble movements in Hellsweeper VR are complemented by an arsenal of melee and ranged weapons, as well as magical elements. I enter the hellish arena with two pistols, a double axe and ice magic and have to face several waves of enemies.

The right combination of movement and attack makes for action-packed moments reminiscent of a Devil May Cry in first-person perspective. I somersault over a monster, fire a magazine at it while airborne, and land a double axe blow on the next enemy.

Magic trick in the combat system

While guns do exactly what is expected of them, I can also throw the cleavers or use them for defense. That special something is brought to the combat system by the various magical elements like fire, ice, or gravity. I can use them to either add a magical damage type to my weapons or to fully concentrate on my spell. 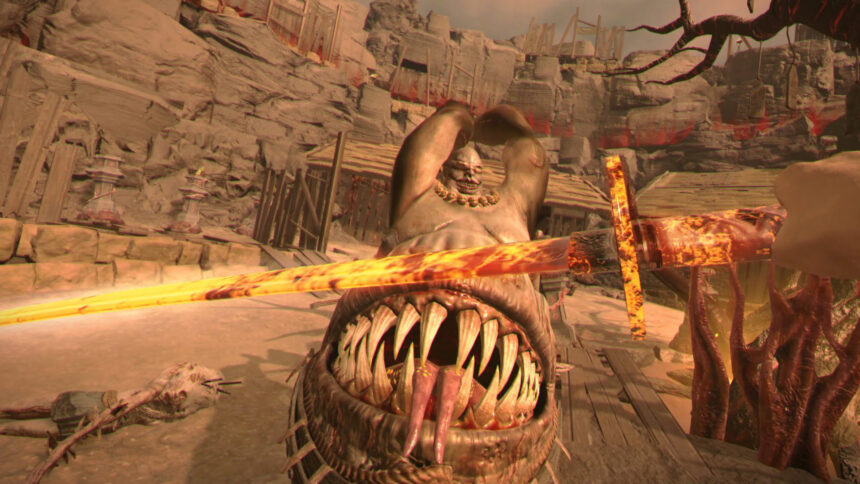 In Hellsweeper VR, you can cover swords and firearms with magical elements to cause even more damage. | Image: Vertigo Games / Mixed Realms

With sweeping hand movements, for example, I summon frost orbs. With them, I either fire a blast of ice at my opponents or create a magical whirlwind that traps several hell-dwellers at once.

Hellsweeper VR is supposed to offer a co-op mode in addition to the roguelike mode in single-player. There will also be a sandbox mode, which has not yet been defined in more detail.

Hellsweeper VR will be released at the end of 2022

Hellsweeper VR isn’t exactly squeamish. During the arena fights, body parts fly around everywhere. However, with all the action, I missed good feedback for my hits. Axes and firearms do not have the devastating effect expected of them. The Walking Dead: Saints and Sinners 2 is much more satisfying in this respect. Nevertheless, the spiritual successor of Sairento VR remains a hot candidate for the most offbeat VR action hit of the year.

We’ll see if the developers at Mixed Realms can polish the game and deliver a VR game that motivates for several hours before the end of the year. Hellsweeper VR is scheduled for release in the fourth quarter of 2022 for PC VR headsets. A version for Meta Quest 2 is also in the works.