HBO releases augmented reality app for “House of the Dragon”

The Game of Thrones sequel gets an augmented reality app for smartphones, where you raise baby dragons and teach them commands.


The sequel to the hit series Game of Thrones is in the starting blocks. Starting August 22, fans can follow the rise and fall of the Targaryen family in House of the Dragons. To accompany the series opener, HBO released an augmented reality app that lets you raise the Targaryen dragons in your living room.

The AR app “House of the Dragon: DracARys” brings the dragons of House Targaryen into your real environment. At the beginning of the game, you steal a digital dragon egg from Westeros and hatch a baby dragon in the living room, your garden, or on your desk.

Use your smartphone to place the dragon anywhere you like. Then, track your new roommate on the screen. The digital mythical creature superimposes itself on real environment. In the best-case scenario, looks as if it is moving freely in front of you.

Raise the baby and let the fully grown AR dragon fly through the city or breathe fire in the middle of the bus stop. Each dragon should differ in color and appearance and have its own personality. Within the app, you can learn Valyrian words and teach the dragons new commands via voice command.

Augmented reality app for House of the Dragon: Like a dragon Tamagotchi

For your dragon to reach the next age level, growing bigger and stronger, feed it and practice with it. (Tamagotchi says “hello.”) As in Pokémon Go, wander through the real environments and explore the dragons. 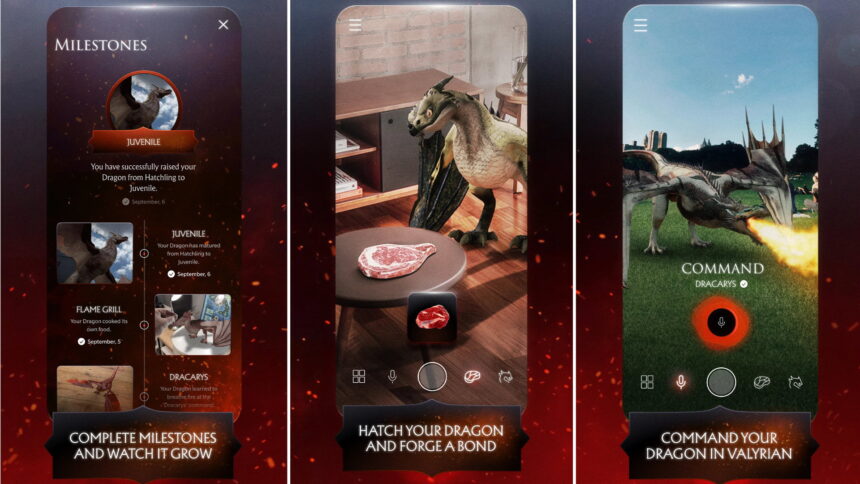 In the AR app House of the Dragon: DracARys, you raise a dragon like a Tamagotchi. | Image: HBO

“When the dragons of Westeros appear in the series, it’s always a breathtaking, awe-inspiring moment. With DracARys, we wanted players to experience those moments of awe and wonder in the context of their everyday lives,” said Kevin Young, the game’s lead creative.

The free House of the Dragon: DracARys augmented reality app is available now for iOS and Android smartphones.