Plants and trees make you happier, even in VR – study

Green strips in the concrete desert bring relaxation, even in virtual reality: This is the conclusion of a study by the University of Lille.


Let your thoughts flow, take a relaxed stroll through the park and let your gaze wander: In cities, vegetation has the effect of making people feel more relaxed during walks. A cognitive and neuroscience study at the French University of Lille aims to find out whether this finding also applies to a virtual walk with VR headsets.

The 32 test subjects (students and employees of the university) walked around the virtually recreated campus a total of six times with an HTC Vive on their heads.

Vegetation soothes even in virtual reality

The square in front of the library, which they were familiar with, initially offered only bare buildings with sidewalks and later plantings such as trees and large meadows. Participants could cross the square, linger in a nice spot, or virtually touch leaves with the Vive controllers. So there was some interactivity.

And indeed: although the participants only moved on the spot and there was no real wind blowing around their noses in the test lab, they were clearly more relaxed in the midst of the vegetation. The differences in virtual reality were similar to those in comparable studies in the real world.

Participants moved more slowly overall and at a higher heart rate in the virtual greenery, which the researchers believe indicates increased enjoyment. This suggests that colorful interruptions in the gray of the city could be an effective way to increase attention or well-being.

More accurate insights thanks to eye-tracking

One advantage when experimenting with VR headsets is eye-tracking, which can be used to document the behavior more precisely. Instead of a normal HTC Vive, a developer version with implemented eye tracking from SMI (Senso Motoric Instruments, acquired by Apple in 2017) was used.

Gaze position and movement of both eyes were measured for all subjects. Sensor data from the VR headset was also analyzed to measure behavior, including position, distance, and acceleration. 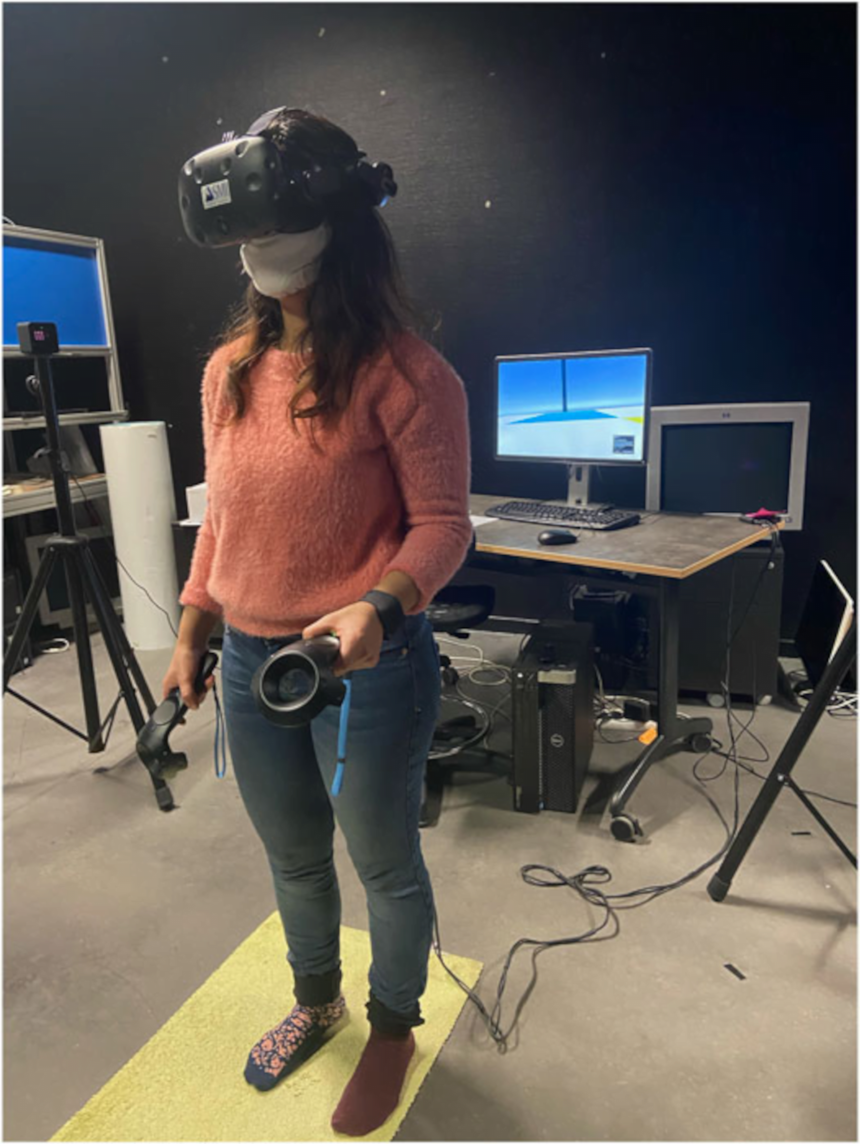 From gaze direction, blink frequency, and time spent looking at specific points, the scientists drew conclusions about perception and its influence on spontaneous movement changes. In the virtual concrete desert, it was more common for study participants to suddenly continue walking at a fast pace. In the green backdrop, a significantly slower pace was observed.

Do even small strips of green bring relaxation?

Humans are physiologically better adapted to living in green vegetation rather than concrete environments, the authors say, referring to studies from evolutionary psychology.

But because nature can’t always be integrated into existing buildings on a larger scale, urban designers have been inspired to create small, interspersed green spaces. Until now, it was unclear whether such natural splashes of color were sufficient for a restorative effect.

Built-up places alone could cause a higher level of anxiety or attention. The increased walking speed indicates a higher stress level.

The study was led by Adamantia Batistatou and Florentin Vandeville of the University of Lille and Yvonne N. Delevoye-Turrell of the Lille University of Science and Technology Villeneuve-d’Ascq. Find the results at Frontiersin.org.