Gates01 is a Ready Player One cage with a treadmill, slim VR headset and haptic vest

StepVR has released a few more videos detailing the components of the Gates01 “Metaverse cage”. The following video features the omnidirectional treadmill floor.

The VR headset is quite slim and features advanced pancake lenses at 4K resolution. For myopic people, the diopters in the headset are adjustable.

And then there’s the vest, which is supposed to provide “a slight” haptic feedback while also serving as a support so that the person in the Metaverse cage doesn’t walk or fall against the cage wall. According to Guo Cheng, founder of VR Step, the vest can give the feeling of being touched by another person. He cites Ready Player One in this regard.

On around three square meters, the Chinese start-up “StepVR” wants to offer a particularly immersive VR experience in an extraordinary “all-in-one” package.

The VR cage “VR Gates01” is packed with everything a particularly immersive VR experience needs: Laser tracking for motion capture, a force feedback vest and a “robotic haptics system”, gloves and the floor is a treadmill.

A powerful PC is also part of the cage, and the connected VR headset is said to weigh only 150 grams. The cage is about two meters high and occupies an area of approximately three square meters.

For StepVR founder Guo Cheng, Meta’s VR headset is a “small toy” compared to his Metaverse Cage. He promises a “total immersion” in the style of Ready Player One. The comparison to Meta is off, however, as Cheng’s product will initially only be available in arcade-style retail. 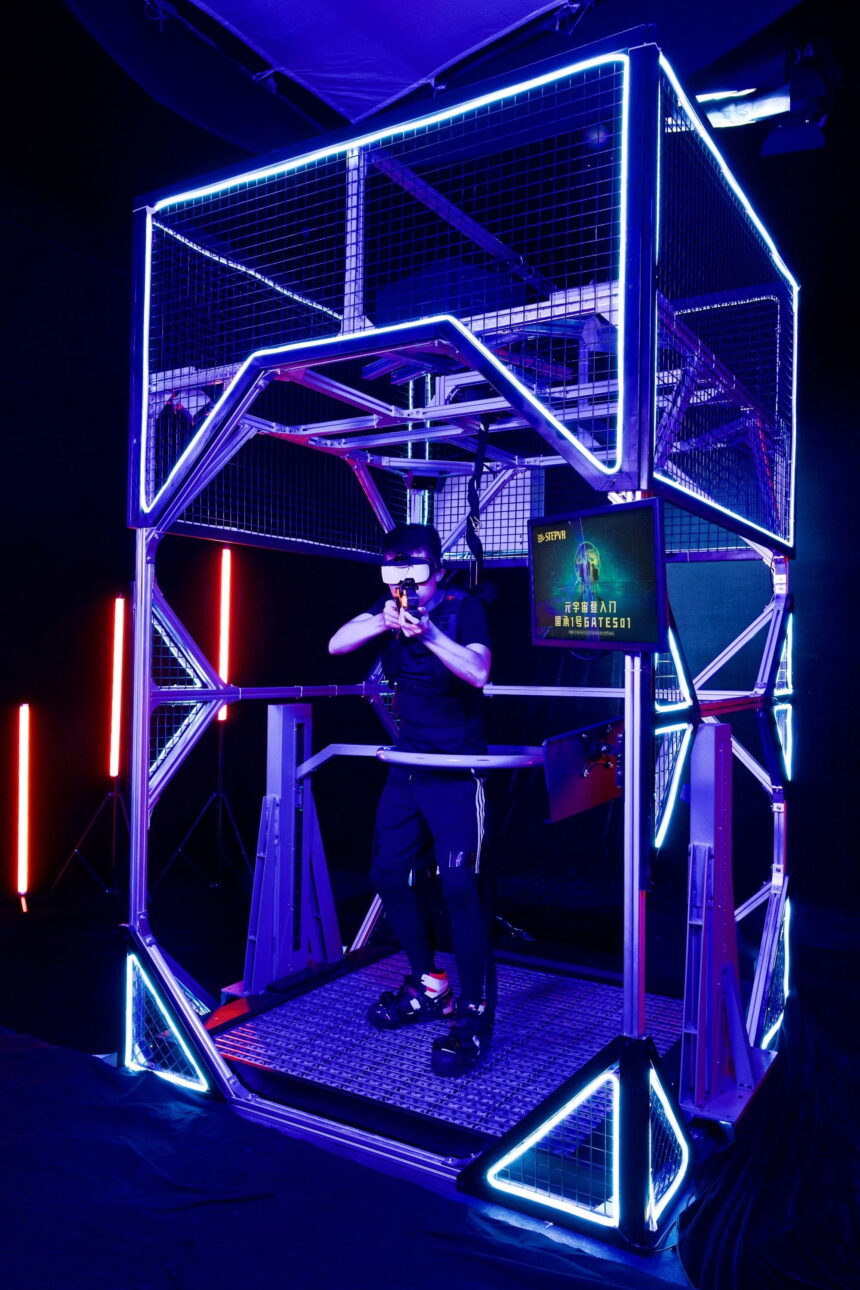 According to the founder, StepVR’s Metaverse cage is designed for maximum immersion. For now, the cage is only available in stores, a later version for home is an option. | Image: StepVR

StepVR plans to sell the VR Cage in China at shopping malls and other stores starting in July. Sales in Singapore will begin in October. The fancy product will then launch in Japan, South Korea, the Middle East, North America and Europe in 2023.

The price of the business version is not known, a possible later “Family Edition” could cost between 2000 and 2500 US dollars according to Guo.

“Entertainment and education are cornerstone sectors for the metaverse,” Guo said. “Our goal is to make the next generation of gear for home-computing platforms [that come] after the smartphone.”

Guo founded StepVR in 2013, having previously spent ten years working on wireless technology at a Dutch company. Private investors have backed the startup with about $15 million so far. In 2019, StepVR launched “Future Battle,” a VR arcade experience for many people at once with multiple games and eSports appeal (see video). StepVR has been able to sell the system to 140 Chinese VR arcades so far.

According to Guo, nine years of VR engineering experience have gone into the Metavere cage that has now been announced. Currently, around 100 employees work for the company.