Diocletian’s Palace in the Croatian coastal city of Split is one of the best-preserved buildings of antiquity. A recently opened VR attraction allows visitors to travel back in time and see what the imposing retirement residence of Roman Emperor Diocletian looked like after it was built in 305 AD. I tried out the VR experience.

I have been living in Croatia for four years and I write about virtual reality on a daily basis. When I heard that the first historical VR attraction in Croatia opened in Split, I couldn’t pass up the opportunity to visit it and travel back in time in VR.

The palace, which covers about 30,000 square meters, is the biggest tourist attraction in Split. It was built on the cusp of the fourth century and commissioned by Diocletian, the only Roman emperor who left office voluntarily and without violence and spent his last years in this palace. 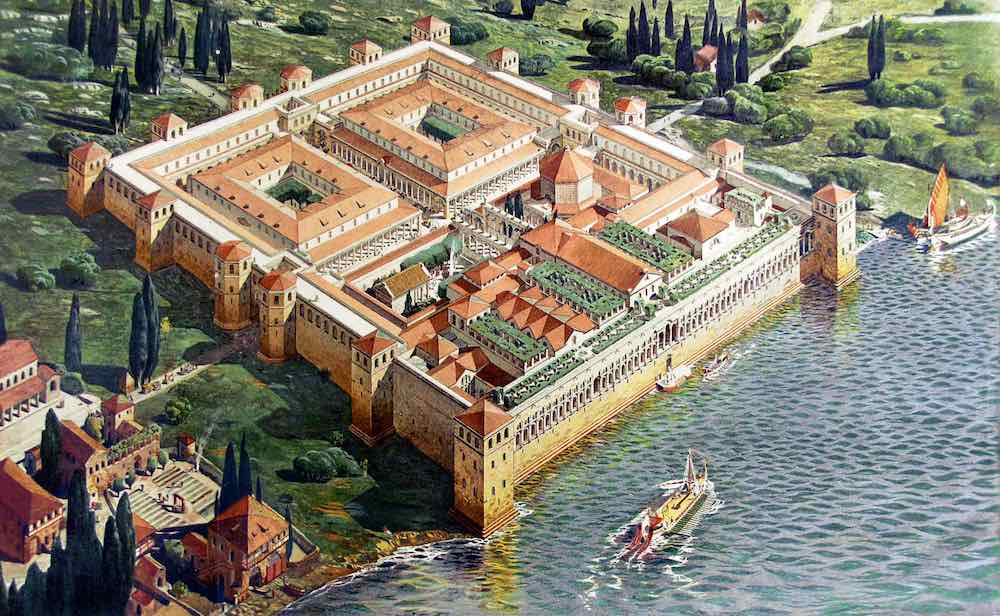 Reconstructive illustration of the palace from 1912. | Image: Ernest Hébrard

Today, the palace, a UNESCO World Heritage Site, forms Split’s historic old town and attracts nearly a million tourists to the city each year with its architectural treasures, restaurants and bars, and a maze of winding alleys. 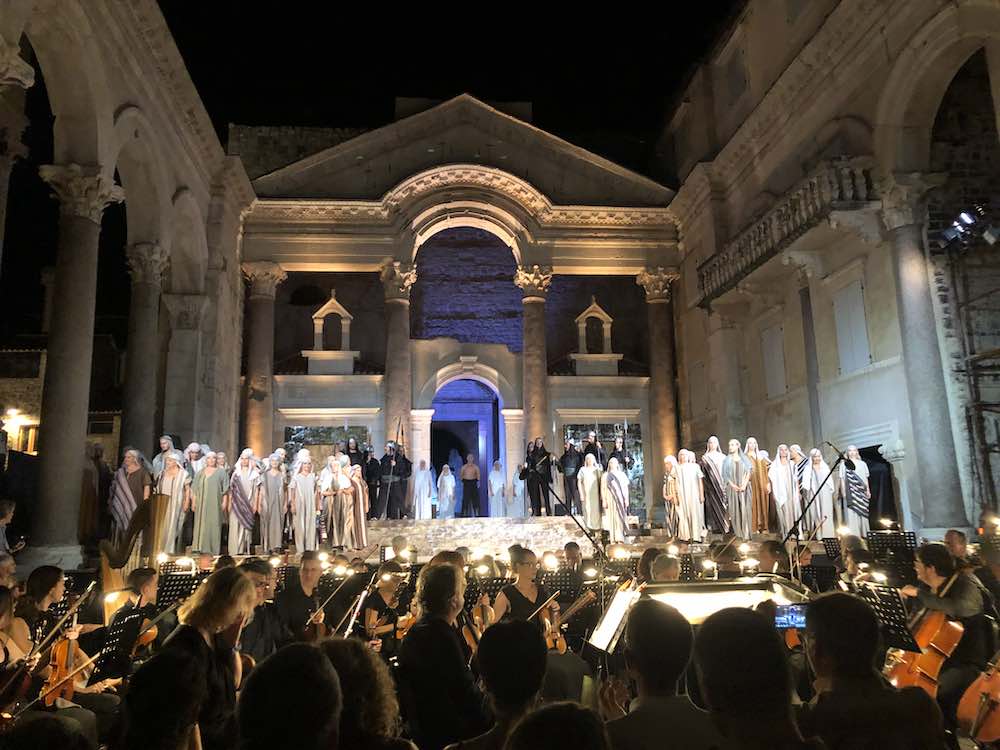 Gentle transition into the past

The VR attraction Diocletians Dream is located in the immediate vicinity of the palace, not far from the former palace walls.

The entrance area already puts me in the mood for time travel: I step into a waiting room with a white marble floor and catch sight of a large poster showing a luxurious ancient chamber. A floor plan of the palace hangs on the wall with a legend that shows the places I’m about to visit in virtual reality. 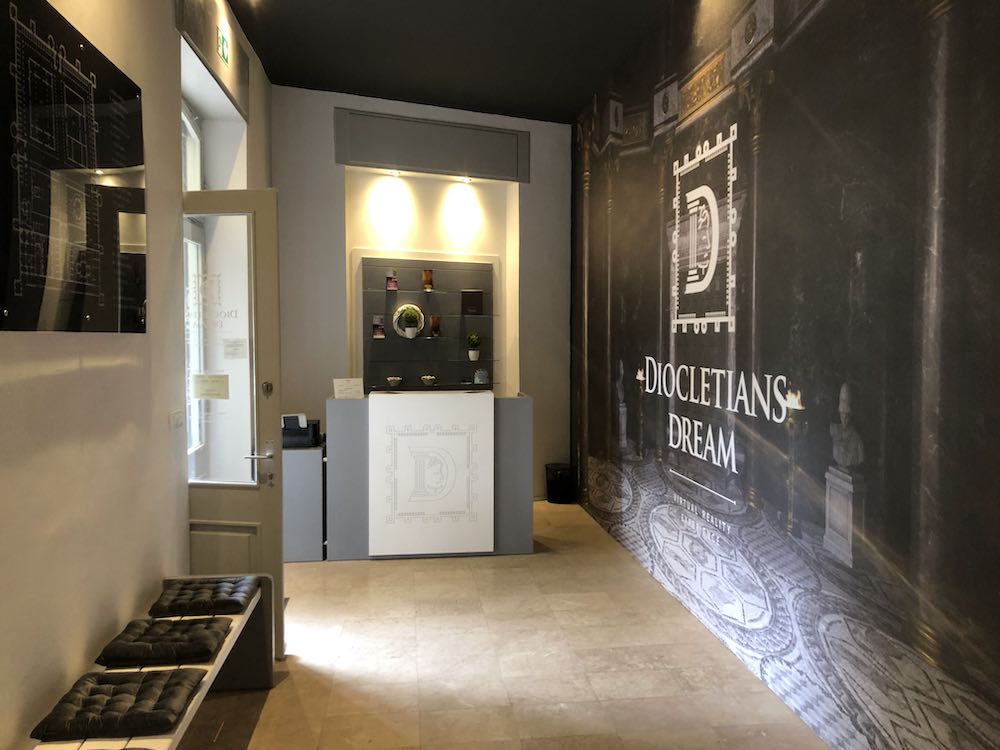 The entrance area of the VR attraction, which also serves as a waiting room. | Image: MIXED

I step through a heavy red curtain into an oblong screening room. On either side are several seats separated by wooden partitions.

The walls of the projection room are designed in the style of a trompe-l’œil and are meant to give the impression that one is in the basement vault of the palace, which is open to visitors to the city today. Even the real round arches of the projection room were embedded in the optical illusion and stand out as if they were part of the cellar. But who is this old man with a torch? 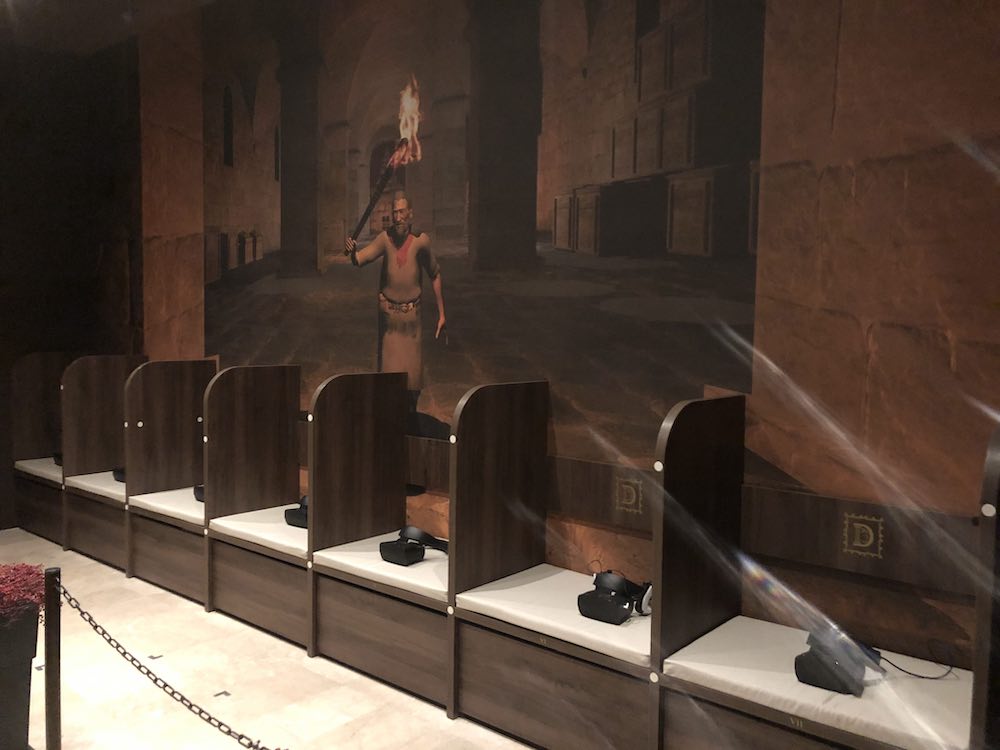 The screening room is designed as a real-world transition into what is about to be experienced in virtual reality. | Image: MIXED

Accompanied by a palace citizen

As I put on an Oculus headset, the gaunt man suddenly stands right in front of me, surrounded by the massive walls of the basement. He greets me and introduces himself as Diocletian’s servant, who has been given the task of guiding visitors through the ancient palace of the Roman emperor.

For the next fifteen minutes, I visit the main sights alongside the guide, as they might have looked 1700 years ago. I walk past merchants through a market street, enter the emperor’s mausoleum, admire the peristyle in its original form, and am even allowed to look around the magnificent chambers of the Roman ruler.

During the tour, I learn a lot about the history of the palace and its most famous inhabitant from the mouth of the city guide. 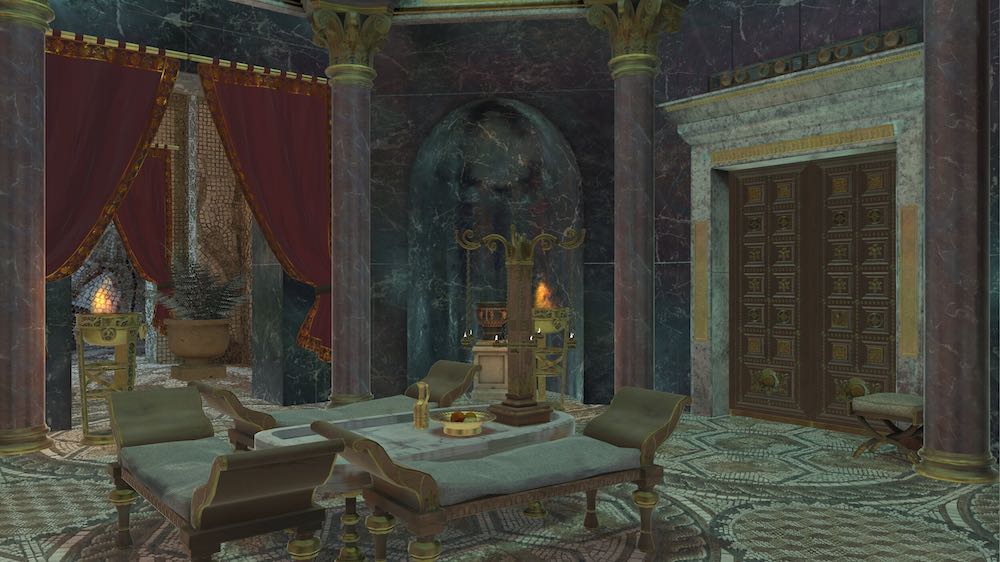 Historians helped with the reconstruction

The VR experience consists of a real-time rendered film that spatially captures head movements and transfers them to virtual reality. You can’t explore or interact with the palace on your own. The VR journey lasts fifteen minutes, and a new screening starts every half hour.

The VR time travel was developed by Irish studio Emagine, which specializes in developing historical VR experiences. The initiators of the VR attraction, Croatian Tomo Taras and Irish Declan O’Rourke, decided to tackle the VR project two years ago and commissioned the studio to do so.

Emagine was responsible for the historical research, which was supported by local historians. The developers also flew to Split several times to get an impression of the palace, scan buildings and take photos for textures. The old palace was to be reconstructed as authentically as possible. 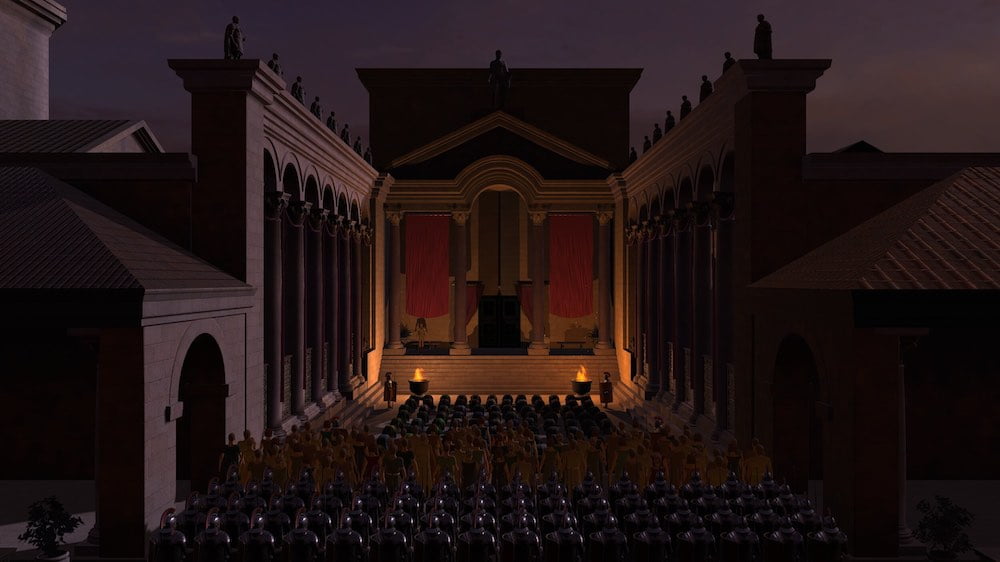 The Peristyle in the time of the emperor. | Image: Diocletians Dream 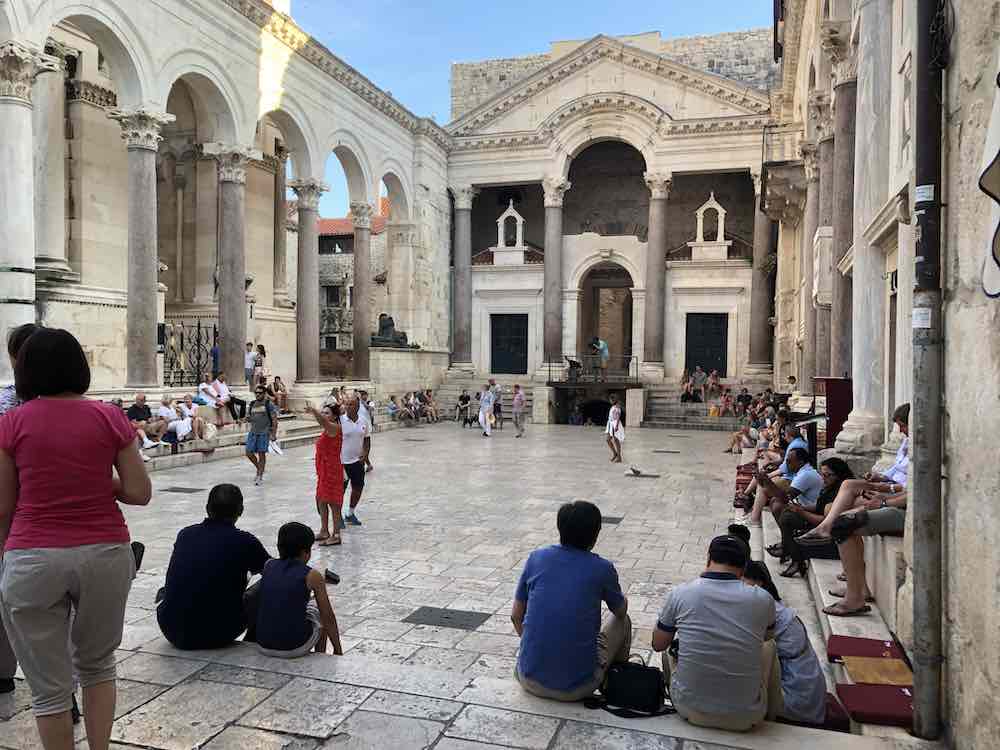 The peristyle in its present state. | Image: MIXED

Interesting for tourists and locals

The VR experience is an absolute must for tourists visiting the palace, and is marketed accordingly by the city. Professional city guides rave about the VR experience.

But the VR experience is not just for tourists, says Taras. It was also developed with locals in mind, who would become aware of the beauty and history of their city once again thanks to time travel.

My reaction was similar because I have walked through the palace countless times and wondered what it looked like in Diocletian’s time. The VR experience made me feel more connected to the past and the city’s history that spans millennia.

“Diocletian’s Dream expands the ideas of what life was like in Split at that time,” says city guide Ives Cikatić. “You can read books, watch videos and read articles, but to experience the palace as if you’ve traveled back in time, it’s a crazy experience.” 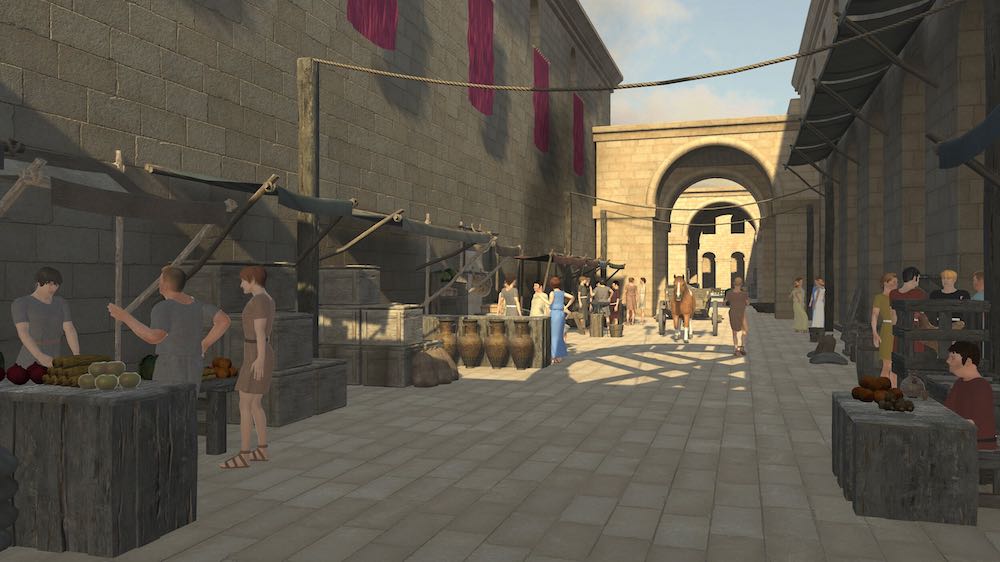 A market scene from the VR experience. | Image: Diocletians Dream

Taras recalls a tour guide who visited the VR attraction. “She cited a study that said tourists can usually remember less than ten percent of the facts mentioned. What remains of all this and what counts is the impression, the experience,” says Taras.

The entrance ticket to Diocletian’s Dream costs around 7 euros. Seats can be reserved on the official website.