What is the range of the Quest 2’s tracking system when you turn off the Guardian system? A VR developer gave it a try.

Youtuber Quentin Valembois is back with a new VR experiment. The Belgian offers tutorials for budding VR developers via Patreon and explores the possibilities of VR and AR, as recently with an augmented reality portal for Quest 2.

In his latest experiment, he answers the question of how far Meta Quest 2 can track before the system gets out of sync and stops working. The pre-configured Guardian boundary is 15 by 15 meters. If you want to go beyond that, you can switch to developer mode and disable all artificial boundaries. But how long will the VR headset last?

For his experiment, Valembois picked a running track several hundred meters long. He took a screenshot of the track in Google Earth VR, took the dimensions, imported the image into the Unity editor, and scaled the game world to fit the real-life proportions exactly. 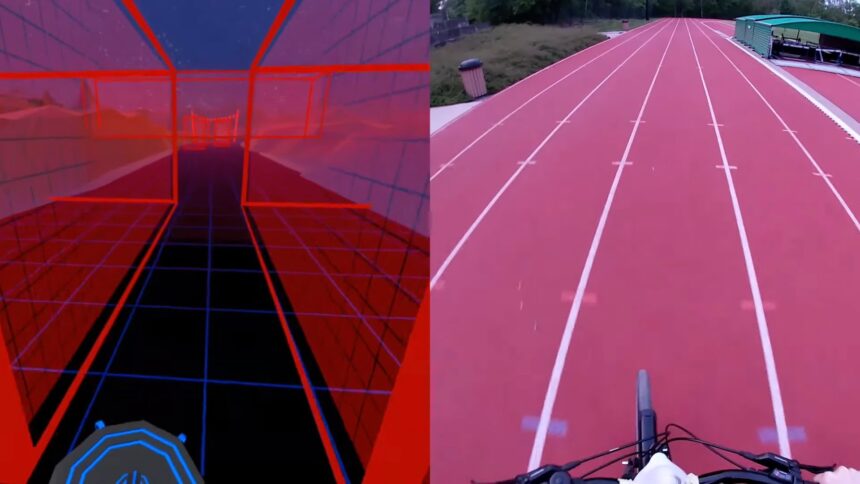 On the right is the physical track, and on the left is the digital counterpart superimposed on it. | Image: Quentin Valembois

For the design of the game world he chose a cool synthwave style with bright neon colors, a huge sun and futuristic skyscrapers. To make things even more interesting, Valembois has brought a real bike into play and modeled a digital counterpart of the vehicle. It is controlled with a VR controller attached to the steering wheel.

Do not try this yourself

Finally, the developer added moving obstacles: digital walls that block the race track. The goal of the “world’s biggest VR game” is to reach the finish line as quickly as possible without touching the obstacles.

You can see the result of this race in his YouTube video. Spoiler: At a certain point, the tracking system fails without the developer noticing. The result is an accident, which fortunately ends without serious consequences. After all, he managed to exhaust the Quest 2’s tracking system.

Valembois describes the gameplay as very immersive. So immersive that he forgot about the real world.