Canon is launching a new mixed reality headset in the summer. What does it offer?

The MREAL X1 follows the entry-level MREAL S1, which appeared in early 2021. The headset is designed for video AR and can add digital elements to the physical environment.

Those who want to use the device in virtual reality mode can attach the included eyecup to the casing. It shields the glasses from ambient light and thus provides more immersion. Users who wear glasses can use them in both modes without any problems.

The MREAL X1 must be connected to a high-end computer via cable. Canon recommends an eight-core processor with at least 3.9 GHz, 32 gigabytes of RAM and an Nvidia Quadro RTX 5000.

The outsourcing of the computing unit and the power supply enables a slimmer form factor with a low weight of 359 grams including the head mount. In comparison: The standalone Meta Quest 2 weighs more than 500 grams. The display unit can be folded up at any time. 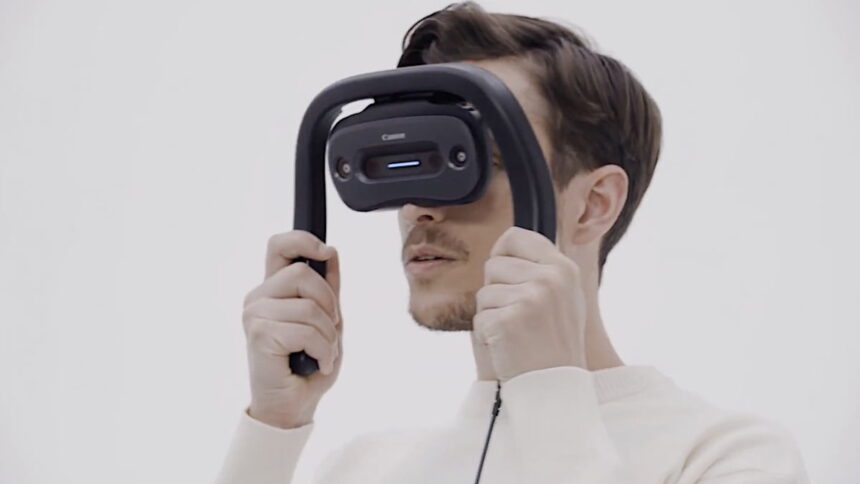 Canon offers an optional handheld accessory so you don’t have to strap the headset to your face. This way, it is easier to put the headset on and off. | Image: Canon

The slim display module alone weighs only 158 grams and can optionally be attached to a separately available double handle. In this handheld mode, the device can be easily passed around, for example at trade shows or in showrooms.

The device is scheduled to go on sale in June 2022. The price is not known, but it is likely to be exorbitantly high. The older S1 model started a year ago at the equivalent of just under 32,000 euros.

Video AR headsets are likely to become the gold standard for XR technology in the next few years, largely displacing traditional VR glasses. Leading the way are Meta’s Project Cambria (info) and the Lynx R-1 (info), which will be released later this year and should make video AR affordable. Apple, Microsoft and Google are also working on devices of this type, reportedly.

Technically, the MREAL X1 is already a bit outdated, as a cable and the narrow field of view are no longer up to date, especially for the called price.