Campfire, which emerged from the former AR start-up Meta (no, not ex-Facebook), introduced its eponymous AR collaboration system a year ago. The complete package of three devices and matching software is designed for specific B2B scenarios. 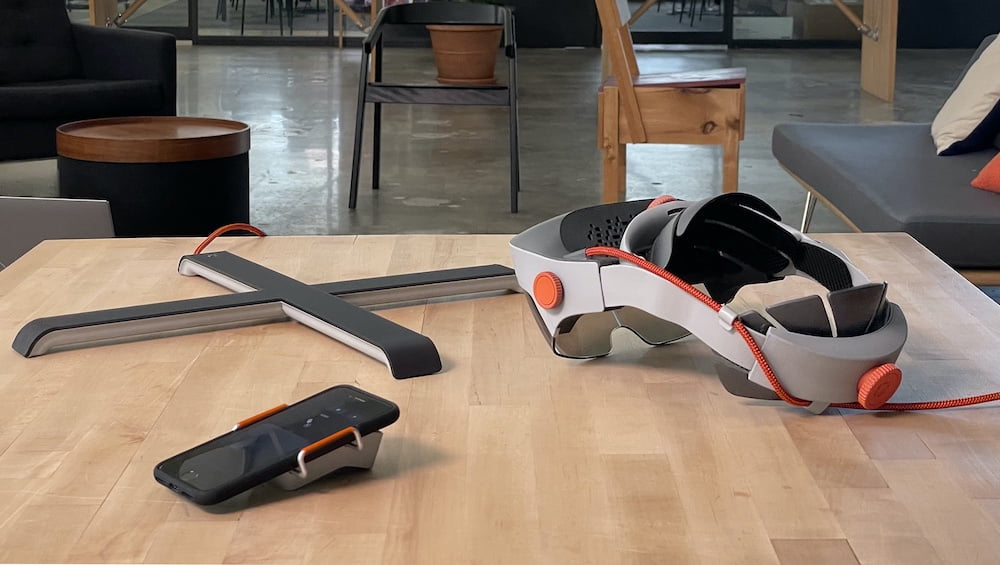 The three components of the original Campfire system at a glance. | Image: Campfire

In addition to the somewhat clunky PC AR headset (“Campfire Headset”) and a controller attached to the smartphone (“Campfire Pack”), a kind of holo-monitor (“Campfire Console”) is used. This cross-shaped object is placed on a table as an anchor point for the AR application. Users gather around the cross to view and work with AR projections together.

Campfire did not meet its planned launch date of fall 2021. Instead, the manufacturer responded to numerous requests for a way to work in a larger space. At Augmented World Expo 2022 in Santa Clara, the company is now announcing the “Campfire Studio Console” as an AR projection surface for larger spaces.

The mat sits on the floor instead of on a table and provides more projection space. Users can place several of these mats on a hall floor and set up large areas for AR within minutes, the manufacturer says. 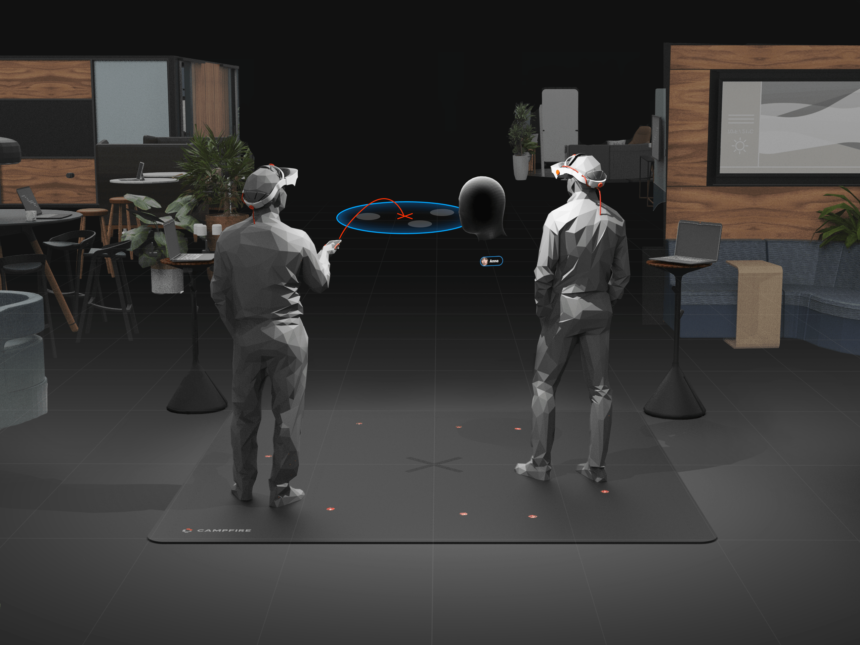 To control the AR software, Campfire turns the smartphone into a remote control. To do this, a control box is attached to the smartphone, which emits a beam of light that acts as a kind of cursor. The smartphone’s touchscreen serves as an additional input surface.

Smartphone or iPad users without an AR headset can also participate in a Campfire session. They view the augmented reality models on the screen of their mobile device as if through a window.

In the “Campfire Scenes” application, users can first prepare scenes on the monitor. The software supports more than 40 formats of 3D models and scans. Then the “Campfire Viewer” – the AR headset – comes into play.

In the “Campfire Scenes” application, users can first prepare scenes on the screen. The software supports more than 40 formats of 3D models and scans. Then the “Campfire Viewer” – the AR headset – comes into play.

The headset, which is connected to the PC via Thunderbolt 3, projects images into the field of view via a mirror construction. This rather simple optical solution has the advantage of a comparatively large field of view of 92 degrees. The disadvantage is the somewhat clunky form factor.

As a system requirement, Campfire lists a graphics card that is classified as “VR Ready”. The following video shows the old Campfire package in use.

Interested parties can apply for Early Access on the official website to be there when orders start. Campfire plans to sell the system via a subscription. Pricing is not yet known.