A start-up wants to protect pedestrians and is equipping its autonomous driving delivery bots with external airbags. How safe are the bots?


The next time you encounter an autonomously driving delivery bot on the sidewalk, you won’t have to worry about a painful collision. At least if it’s a Nuro R2. In the future, the U.S. start-up will equip its bots with an external airbag to protect pedestrians in the event of a collision. What looks funny at first has a serious background, of course.

Nuro has been active in the market for autonomous driving delivery bots since 2016. The company was founded by two former Google developers: Dave Ferguson and Jiajun Zhu were involved in the development of the Google Driverless Car, which was later acquired by Waymo and transformed into an autonomous driving system. 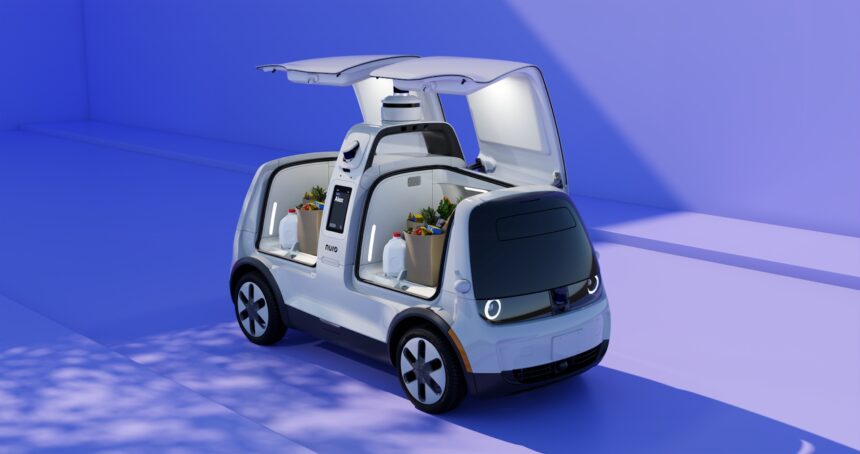 The third generation of Nuro delivery bots is expected to roll off the assembly line later this year. | Image: Nuro

The delivery bot manufacturer has held an exclusive license since 2020 and is one of eight startups operating driverless in California. Nuro is allowed to operate self-driving vehicles in the U.S. state without security personnel for commercial delivery runs. In Santa Clara and San Mateo, the vehicles are allowed to deliver goods at a maximum speed of 56 km/h on certain roads in clear weather.

Last year, a world-renowned package delivery service also recognized the potential of the startup and its compact robot-delivery vehicles. FedEx has since been testing the autonomous delivery bots in Houston, Texas, where they make select same-day, express or multistop deliveries for the service provider.

Exterior airbag on delivery bots: looks funny, but could save lives

For the latest generation of R2 delivery bots, Nuro is now introducing some new features on its own company blog, including an external airbag. If a collision cannot be prevented, this should protect pedestrians. According to Nuro, this should “reduce the force of the impact and the number of injuries in the event of a collision.” 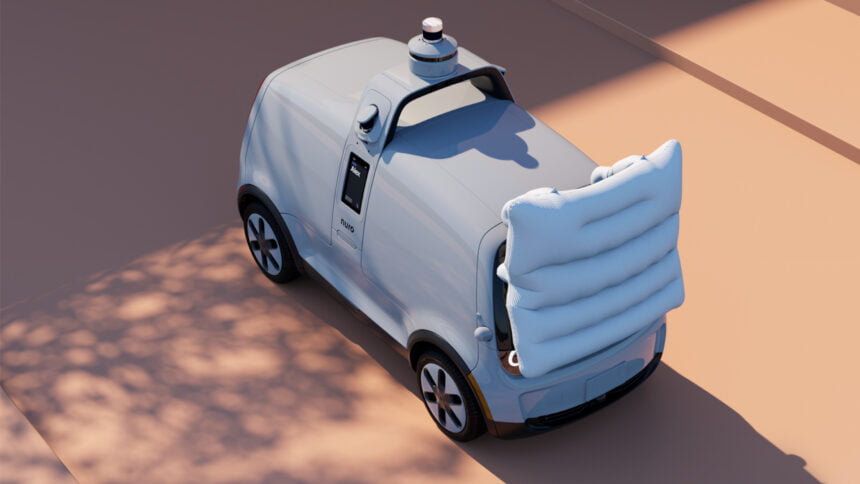 The autonomous driving delivery van’s external airbag is designed to prevent injuries in the event of potential collisions with humans. | Image: Nuro

At first glance, the airbag looks like a cushion glued to the delivery bot. But given the rising number of fatal accidents involving pedestrians and cyclists in the USA, any attempt to ensure greater safety on the roads there is likely to be welcome.

Especially since under the new administration of President Biden, the safety assessment for vehicles is to be overhauled. The “New Car Assessment Program” will include an assessment for collisions with pedestrians.

Autonomous driving: The quest for safety

Autonomous driving vehicles are often seen as the future of safe road travel. Manufacturers such as Waymo and Cruise continually promote the safety of their systems. In 2021, Waymo published a study purporting to show how an autonomous driving system could have avoided real-world fatal accidents.

In the total of 52 simulations in which the Waymo Driver was used as an accident initiator, the AI avoided every accident. Argo AI, a partner of the VW Group, published new guidelines for developers late last year in collaboration with a U.S. association. The guidelines are intended to help make autonomous driving safer for cyclists.

Nuro R2: Room for 24 shopping bags, but not one person

The airbag bot will be the first model to roll off the production line at Nuro’s new manufacturing plant in Nevada. The bot factory is scheduled to open later this year and will cost the startup about $40 million.

Nuro says it plans to put tens of thousands of delivery bots on North American roads in the coming years. For manufacturing, Nuro is partnering with BYD North America, one of the largest automotive supply networks in the world, as it buys the hardware components for the delivery bots.

Autonomous on the road at 72 km/h

The all-electric vehicles reach top speeds of up to 45 miles per hour (ca. 72 km/h). A 360-degree sensor kit provides an artificial intelligence system with data about the environment. If sensors are dirty, the Nuro R2 can clean them unassisted.

The latest generation of delivery bots is said to be circa 20 percent smaller than an average car and capable of carrying about 250 kg. According to the manufacturer, this corresponds to about 24 shopping bags. An integrated cooling system can keep fresh or frozen foods at the right temperature. By the way, there is no room for humans in the vehicles. They are designed from the ground up for autonomous driving and have no cockpit.