Nreal and Nio release an AR headset for e-cars. Those who have always wanted a 130-inch TV in the cockpit can now fulfill their wish.

The Chinese AR start-up Nreal wants to conquer the tech world with slim and fashionable AR headsets. With the Nreal Light, Nreal launched the first mobile consumer AR headset last year, which comes very close to this vision, at least on the outside. Now, the startup is releasing a new AR headset in cooperation with Nio, designed specifically for e-cars.

A funding round last fall brought Nreal $100 million. Since then, the augmented reality startup is estimated to be worth a total of $700 million. One of the investors is Chinese e-car maker and Tesla competitor Nio.

CEO Chi Xu announced at the time, in addition to the million-dollar investment for Nreal, that he wanted to enter the Chinese market in 2022 and raved about the great potential of a possible collaboration with Nio. AR would be an interesting application scenario in their e-cars. Now the two companies are launching a jointly developed AR headset for Nio’s e-cars.

The “Nio Air AR Glasses” headset, which is likely to be an adapted version of the Nreal Air, is designed to project a virtual screen into the wearer’s field of vision equivalent to a 130-inch TV viewed from twelve feet away. The AR headset can only be used in combination with Nio’s augmented reality platform PanoCinema. 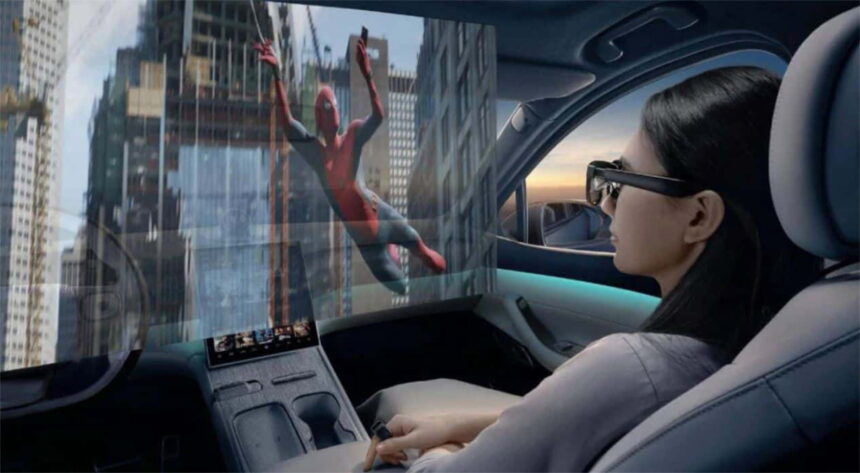 The Nio Air AR Glasses are said to project a virtual screen into the field of view that resembles a 130-inch TV. | Image: Nio

PanoCinema is exclusive to Nio’s current car models, such as the Nio ET7 or ES7. So the AR headset cannot be used outside the car. In this case, the Nio Air is connected to the entertainment systems integrated into the vehicles. The e-car manufacturer provides its customers with 260 films in Dolby Atmos quality and 200 3D films. The library is to be continuously expanded.

Nio’s AR headset is controlled via the “Air Smart Ring.” As the name suggests, this is a finger ring equipped with a touchpad. Users can use it to navigate through the interface of the Nio Air. Nio had the Air Smart Ring designed by Nolo, a Chinese manufacturer of augmented reality and virtual reality devices.

The Nio Air is the second collaboration between Nio, Nolo, and Nreal. Late last year, Nio unveiled the ET5 Sedan, a “VR and AR native” e-car equipped with VR headset from Nolo and AR headset from Nreal.

The Nio Air Glasses are available now to Nio customers in China and are expected to cost around $330. Initially, the AR headset is limited to 800 units. 500 units will be available for the ET7, ES7 and ET5 models, and 300 units for the ES8, ES6 and EC6 models.