Snap continues to invest in AR technology – and may be protecting itself from an aggressive Meta by doing so.


In May 2021, Snap announced the acquisition of Waveoptics, a British manufacturer of waveguide displays also for AR glasses. Snap paid half a billion US dollars for exclusive access to displays and know-how.

A lot of money for a technology that is not yet good enough for a tech eyewear revolution and whose future is uncertain. But still, a necessary investment to stay in the race for AR glasses?

In addition to Waveoptics, Snap has now acquired LCoS and MicroLED display maker Compound Photonics, founded in 2007, reports display blogger Karl Guttag, citing several sources he knows. The acquisition sum is not known, nor has the deal been officially confirmed. However, Guttag was already right about Waveoptics in advance.

LCoS displays are see-through microdisplays with high resolution and brightness that are well suited for tech glasses. They can be used in combination with waveguide technology. So far, Compound Photonics’ LCoS displays have not made it into commercial tech glasses, according to Guttag. 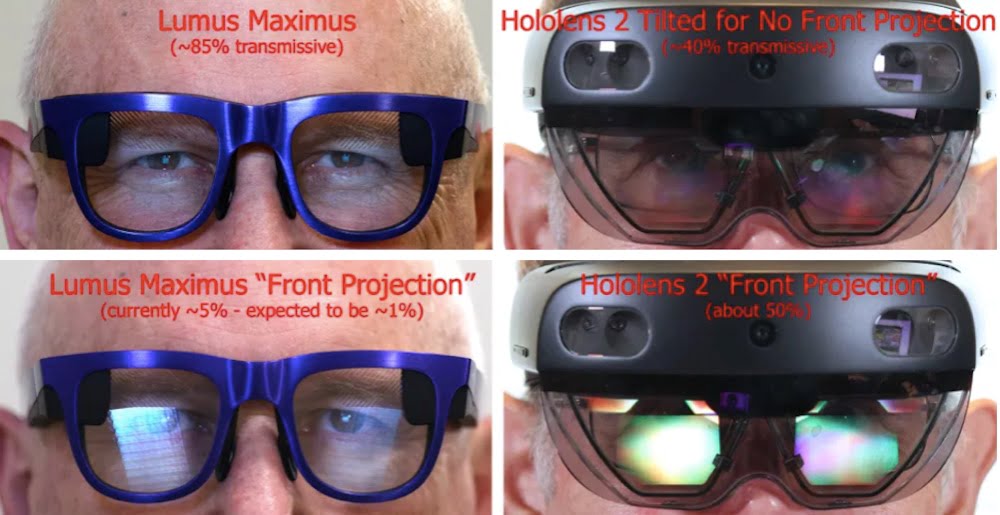 Comparison image of Lumus Maximus with Hololens 2 – Compound Photonics’ LCoS technology combined with Lumus’ waveguide technology is more suitable for everyday use because the eyes are still clearly visible when the display is active. Image quality is also said to be better. | Image: Karl Guttag

The Lumus prototype “Maximus” used the CP displays, and this device was credited by the rather critical Guttag with excellent image quality for AR glasses with “wow factor”. The imaging technology is clearly superior to that of Microsoft’s Hololens 2, he said: the prototype offers a high-contrast, much higher-resolution image with rich, even colors and high brightness.

However, the display combination from Compound Photonics and Lumus cannot solve the biggest problem of AR glasses, the small field of view: The Lumus Maximus comes in at 50 degrees diagonally with an aspect ratio of 1:1 (Hololens 2: 52 degrees, aspect ratio 3:2).

Meta’s shopping spree puts other companies on the spot

It’s possible that Snap wouldn’t have acquired Waveoptics or Compound Photonics if Meta didn’t pull out its wallet so frequently: The Zuckerberg Group is tying up skilled labor, buying exclusive rights to British manufacturer Plessey’s displays in March 2020 and ImagineOptix, which develops specialty lenses for tech eyewear, in December.

There are two reasons for such acquisitions: Meta plans so firmly with a technology that buying out the manufacturer is more cost-effective than contracting it out. And other companies no longer have direct access to the technology, so would have to work with Meta or search for alternatives.

Sufferers of these business practices could be mid-sized companies that are not specialized enough or too expensive to acquire, but whose products cannot compete with those of the large tech corporations, precisely because they also block access to relevant technology. One example might be the aforementioned Lumus, which Guttag said had plans to further develop the Maximus prototype and market it to end users.

Meta is also on a shopping spree in the software sector, with more than six VR studios on its list so far. The latest acquisition, of VR fitness app Supernatural, is currently under review by the US antitrust agency FTC. Snap last bought AR e-commerce specialist Vertebrae in the summer.