Apple’s ex-designer Jony Ive is said to have played a decisive role in the upcoming XR glasses. Unlike Meta, Apple will not focus on gaming.


Ive left Apple in the summer of 2019, but was involved in the development of the Apple XR glasses long before that. Ive pushed for a compact, standalone design in particular, even if it meant the device didn’t achieve the visual quality of a streaming device that was also in development.

Ive continued to be involved in the development of the headset

Ive reportedly continued to advise the headset team on issues such as battery and camera placement and headset ergonomics after his departure. To make design changes, Apple’s XR team had to seek permission from Ive at his home in San Francisco.

The star designer reportedly experimented with a body-worn battery, among other things. It is not clear whether Apple opted for this variant for the final version of the headset.

No focus on games

Four former team members criticize Mike Rockwell’s group for barely looking at gaming as an application scenario. Meta is fully focused on gaming in its XR strategy, at least with Quest 2. This is expected to change with Project Cambria.

Consequently, there is no gaming controller for the Apple headset. Instead, Apple will rely on hand tracking in combination with a “clothespin-like finger clip”. Apple was granted a patent for this in January 2020. 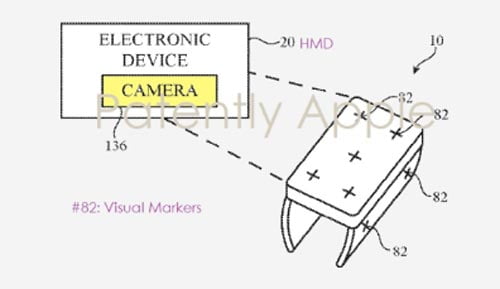 A finger attachment is to support hand tracking haptically, among other things. | Image: Apple

An important application scenario for the Apple glasses is said to be XR telepresence calls with realistic virtual avatars. The glasses are said to have 14 cameras built in, some of which are pointed inward, to digitize the wearer’s face as realistically as possible and display it in VR or AR. This is in line with earlier reports.

The integration of the many cameras is said to have posed special challenges for Apple’s engineers and, according to earlier rumors, led to a delay due to overheating problems.