Varjo integrates sensors and software from OpenBCI into the Aero to facilitate data collection in virtual reality. This data, in turn, can be incorporated into VR experiences.

OpenBCI is an open source Brain Computer Interface (BCI) platform. After a successful Kickstarter campaign in 2013, the team offers sensor boards for measuring electrical brain activity (EEG), among other things.

One product already released is the Ultracortex EEG headset: it can be ordered online or 3D printed, with templates available for download.

In November 2020, OpenBCI announced a project called Galea. The combination of hardware and software serves as an interface for VR and AR headsets.

In the meantime, the makers have also found a hardware partner. Together with the Finnish company Varjo, they are preparing beta devices for Galea: They are integrating numerous sensors into the high-end Varjo Aero VR headset and supplying suitable developer kits.

The contact surfaces of the sensors are built into the housing and the headband at various points so that they touch the skin after being applied. The measured data can be easily used in software engines such as Unity or Python thanks to prefabricated modules.

According to OpenBCI, this is the first device of its kind to simultaneously measure signals from the heart, skin, eyes, and brain. The aggregation of such a multimodal network of sensors from different sources should dramatically facilitate data collection, OpenBCI promises.

Thanks to the precise tuning of various signals, new opportunities would arise to capture users’ experiences and cognitive states. These include mood states such as fear, joy or attention. 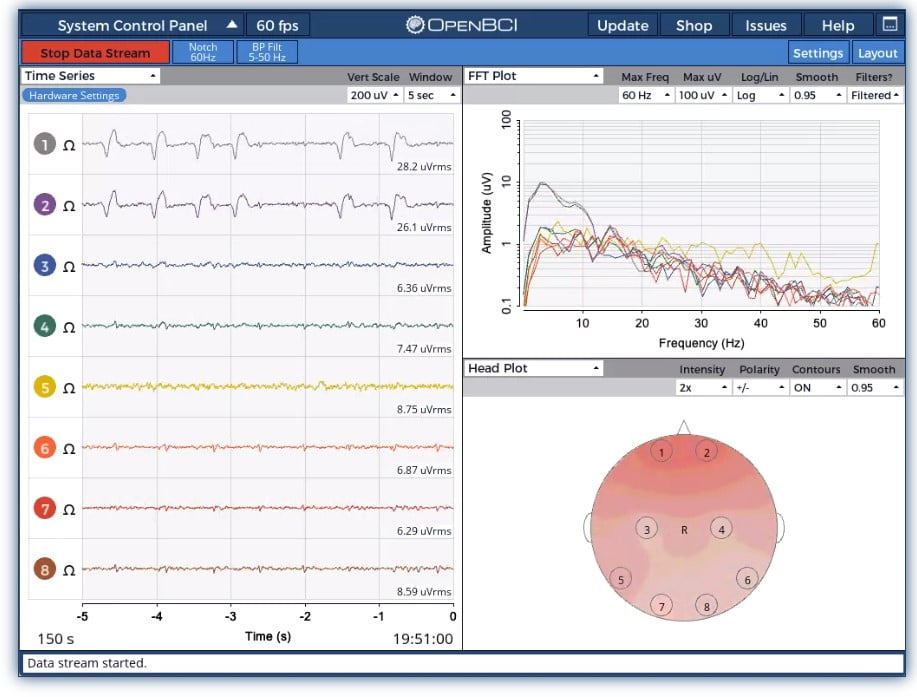 This is what OpenBCI’s measurement software looks like. | Image: Screenshot

In practical use, there are various ways to adapt virtual reality apps. A horror game can specifically increase tension by measuring fear – or scare players who are too relaxed with a jumpscare. Some testers are already using BCI to measure how they respond to certain game mechanics. A wide range of data could also be collected for market research purposes.

“Ultimately, I see the combination of neurotechnology and mixed reality as the future of personal computers,” says OpenBCI founder and CEO, Conor Russomanno. “We’ve been watching carefully as neuroscience, BCI, and consumer technology have converged over the past several years. Varjo’s headsets are some of the best I’ve ever experienced and I can’t wait to see what our Beta users will be able to create with Galea.”

For now, OpenBCI is serving early adopters. A few thousand companies, developers and researchers will be allowed to pre-order beta units of Galea at a yet unknown date. The prerequisite is that they have already applied for the beta program earlier. For the remaining headsets, public pre-orders will start on July 1, 2022. Head over to the official Galea website to learn more.

Valve also already invested in OpenBCI to advance research on brain interfaces. Company CEO Gabe Newell even spoke of BCIs gaining write access to the brain in the foreseeable future. This would make it possible not only to read brain data to learn about mood, but also to manipulate it. This is not yet the case with Galea, which only reads signals.

Virtual and Augmented Reality could turn out to be transitional techniques on the way to brain interfaces, Newell said at a high school talk in December 2021, adding that Valve is indeed investing heavily in headsets and games. In the long term, however, BCIs could turn the market for immersive technologies on its head, according to Valve’s CEO.