Lenovo’s VRX offers all the features of a standalone VR headset. The X in the name stands for an augmented reality mode via color video passthrough. The headset features inside-out tracking via four built-in cameras and supports content streaming for more sophisticated graphics.

In addition, there are two “high-resolution” color cameras on the front, which are supposed to provide even more precision in tracking. They also enable augmented reality (AR) applications, where the environment captured by the camera is streamed into the headset via video and enriched with computer graphics.

Similar to the Pico 4 (Pro) or Metas Quest Pro (Project Cambria), Lenovo relies on pancake lenses. Since they fold the light rays before they reach the eye, the lenses move closer to the screen, which allows for a narrower form factor. In return, the image becomes darker, so a brighter display is required for similar brightness to classic lenses. Moving the battery to the back of the headband should allow for better weight distribution, similar to the Pico 4. 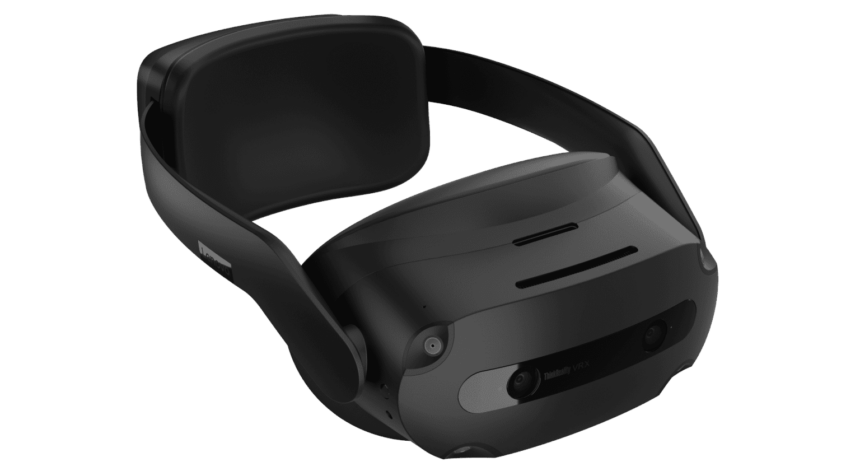 Moving the battery to the back of the headband should make it more comfortable to wear. | Bild: Lenovo

The price and the exact technical specifications are not yet known. The SOC is an unspecified model from Qualcomm’s XR series. Possible fields of application are training, collaboration, and 3D design. Lenovo mentions the use of cloud software and security features as important elements of the “end-to-end” solution for companies.

Besides standalone operation, streaming from PCs and workstations is also an option. A USB-C connection cable is available separately. Furthermore, the system supports cloud-based solutions like Nvidia’s CloudXR.

A software suite from Lenovo includes various “end-to-end services, from consulting and content creation to cloud deployment and customer support.” With the ThinkReality software platform, companies can manage, configure and install apps on larger fleets of headsets simultaneously. Developers can access the Snapdragon Spaces AR platform and the OpenXR SDK.

The release in selected countries is planned for the end of 2022. For now, the VRX headset will only be available in Early Access from some partners. The global launch will happen in early 2023, with the system only being released in selected markets.

Lenovo has already developed various VR headsets over the years, including the Windows Mixed Reality headset Lenovo Explorer. Lenovo was also involved in the design of Facebook’s Rift S. Finally, the standalone Lenovo VR700, which is aimed at gamers, was launched in China in August 2022.