Lurking in the Quest 2 Store is a VR game that looks just as mysterious as its series predecessor. In the review, I take a look at The Twilight Zone VR.

Is The Twilight Zone VR for Meta Quest 2 a full-fledged horror game? Or a VR experience like a theme park where I just walk around a bit? After playing through the first two of the three stories, I feel like the truth lies in the middle – with episodes that entertain for about 45 minutes each.

There are a few stealth sequences, like in Jurassic World Aftermath, where I flee from an enemy through narrow corridors with a radio in hand. Elsewhere, crawling through narrow tunnels is reminiscent of Boneworks, while in the End Times setting, I shoot intrusive enemies. The important point is that all of this is presented in bite-sized morsels, in keeping with the series’ surreal short stories.

The Twilight Zone VR review in a nutshell

Don’t expect a full-length VR game from The Twilight Zone VR. But the three creeping horror short stories capture the surreal atmosphere of the original well and fit the reasonable price of $20.

The Twilight Zone VR is for you if

The Twilight Zone VR is not for you if

The first chapter pays homage to A Christmas Carol by Charles Dickens. The parable puts me in the role of a heartless video game studio boss. The inhumanity of his management becomes apparent to me as I sneak through his studio. The further I flee through the office and the parking garage, the more fatal accusations come to light.

The gameplay is much simpler than in Jurassic World Aftermath or Wraith: The Oblivion – Afterlife. With the flashlight on my vest, I crouch under the desk, distract a pursuer by throwing a can, and radio for key cards. This is pretty standard gameplay, and you’ve probably seen it many times before.

My supernatural adversary is no genius, but he crosses my path in a relatively entertaining way. The cool intro and mostly professional English dubbing make for a nicely staged setting.

In between, the simple narrative structure and some blurry textures make for a trashy atmosphere. But that fits the supernatural flair of the CBS series, which started in 1959 and whose trademark is bizarre scenarios in the mundane – or vice versa. 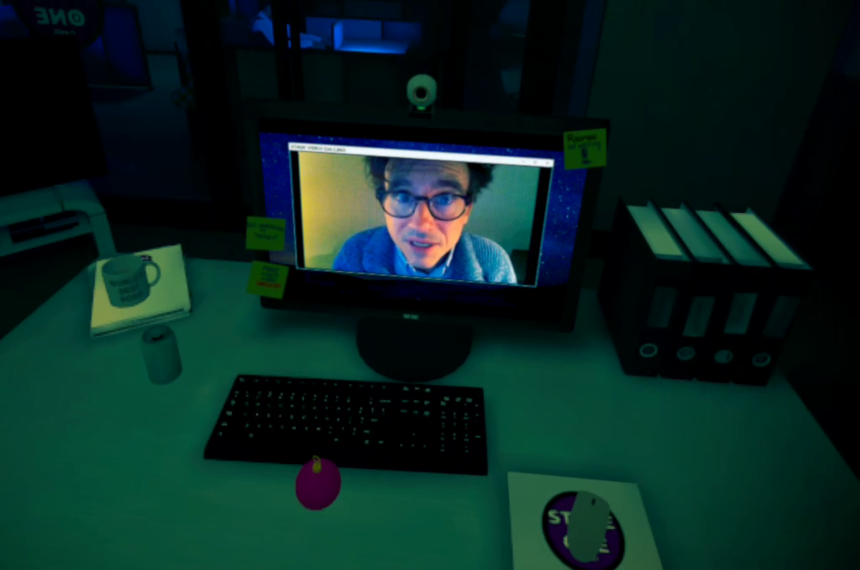 In the first chapter, overtime has even more fatal consequences than in real life. | Image: Fun Train

The shootouts in the end-time setting of the second chapter are even more stripped down than the stealth sequences of the first chapter. Who would have thought that the monsters of the future would simply dissolve into clouds of smoke after a hit? But even there, I briefly enjoy donning the hazmat suit, facing the scorching sun, and searching for a young family member.

The gameplay is standard again: shoot enemies, solve puzzles, find objects. This lets me escape from the bunker to advance the story. In it, despite the departure of Boris Johnson, Great Britain does not come to rest. That’s because the new prime minister has had a probe launched into the sun. As a result, our heat star is expanding tremendously. The result makes today’s heat waves look like barbecues.

In Chapter 3, a science fiction writer has to figure out why he landed on an alien ship, of all things. This sounds like fun, but I haven’t had a chance to try it out yet.

Fearful natures can enter Twilight Zone VR without hesitation, by the way: Apart from minor jump scares, I never really got spooked. The game rather builds on the macabre mystery factor of the series.

For sensitive stomachs, Twin Peaks VR offers adjustments for walking and step turns. I have always found the game to be comfortable.

By the way, the developer behind the game is Pocket Money Games, which should be a mystery even for many. The most well-known project so far was the involvement in the Quest adaptation of Superhot VR. The publisher Fun Train released the trashy and self-ironic Tarzan VR and is planning The Exorcist Legion VR.