A DLC brought Tales from the Galaxy’s Edge a large portion of new content. Is the trip to Batuu now a must?


Tales from the Galaxy’s Edge (abbreviation: TGE) was released at the end of 2020 for Meta Quest 1 & 2 and is the second major Star Wars adventure after Vader Immortal, which was developed by Lucasarts’ VR studio ILMxLAB.

When released, TGE consisted of a mini-campaign and a playable short story, which together provide circa three to four hours of entertainment. The base game was expanded in the fall of 2021 with the extensive paid DLC Last Call, which brought two new mini-campaigns and two playable short stories and more than double the game time.

The following article gives my rather mixed impressions of the base game, which I tested on the technically overburdened first Meta Quest.

Now, I recently had the opportunity to revisit TGE. I played through the base game and then Last Call on Meta Quest 2. You can find my much more positive overall verdict on the VR game in the conclusion.

Vader Immortal was considered the best VR experience in the Star Wars universe, alongside Star Wars: Squadrons. With Last Call, TGE clearly trumps the cinematic Vader experience in terms of scope and gameplay.

Tales from the Galaxy’s Edge: Review in a Nutshell

TGE is a must-play for Star Wars fans. With a Quest 2 and the paid DLC Last Call, the purchase is also worthwhile for those who don’t know how Yoda is.


You will like Tales from the Galaxy’s Edge if you …

In TGE you take on the role of an unassuming droid mechanic working on an old cargo spaceship. The action starts when you are attacked near the planet Batuu by space pirates, who suspect that the spaceship contains valuable cargo.

In the heat of battle, you jettison the cargo towards Batuu and leave the spaceship with an escape pod. Stranded on the green planet, it’s a matter of recovering the mysterious cargo before the space pirates and their ruthless leader Tara Rashin do.

Before the adventure begins, you’ll land in a bar in the heart of the Black Spire Outpost, the main settlement on the planet Batuu. The bar is modeled after the cantina on Mos Eisley. If you expect alien species, exotic music, and a boisterous atmosphere, you’ll be disappointed: the tavern is empty except for its owner, the bartender Seezelslak.

After you have been instructed in the bar by the droid mechanic Mubo, you head into the wilderness of Baatu. You can only see the outpost from a window of the bar: Unfortunately, you can’t leave the bar and explore the settlement. 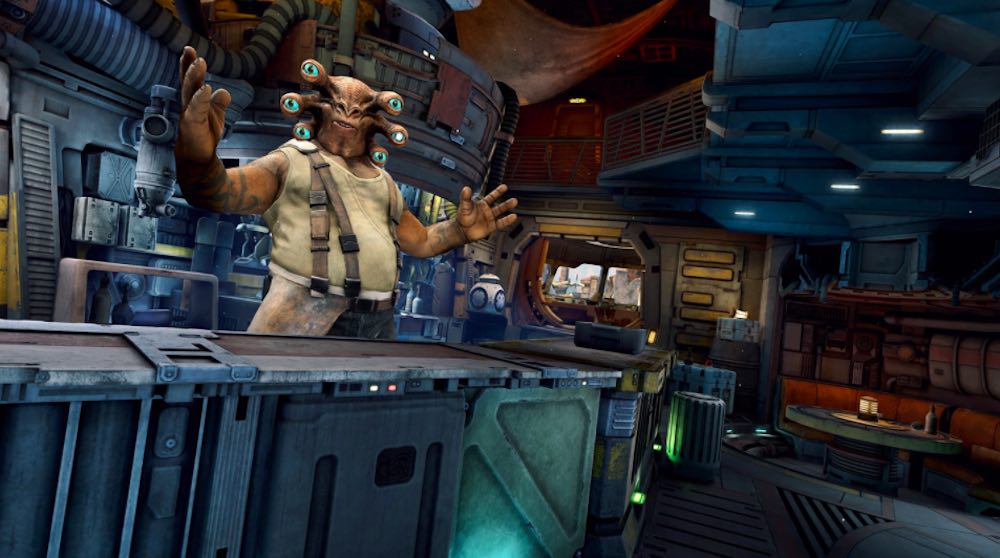 There’s not much going on in Seezelslak’s bar. | Image: ILMxLAB

Blaster instead of lightsaber

Over the next two and a half hours, you’ll shoot your way through a series of tube levels with various blasters. You’ll encounter a handful of enemy types that don’t demand much skill from you.

If you are surrounded by soldiers, drones, and native creatures, you can use up to three flying droids for support. They will follow you wherever you go and automatically attack enemies or mark them so that you can hit them better.

The blasters consume energy. When that runs out, which happens pretty quickly, you’ll have to get new weapons. This isn’t a problem because you can pick up the weapons of dead enemies.

For some variety besides shooting, you can use your multi-tool, which serves as a screwdriver, a cutting torch, or an electric charger, depending on your needs. You can use it to access equipment crates or repair damaged flying droids.

At the side of 3-CPO

You move through the game world fluidly and by teleportation. The latter is necessary to overcome chasms. The action-heavy storyline is lightened up by appearances of well-known Star Wars characters: You’ll meet C-3PO during the mini-campaign and have to free R2-D2 from Tara Rashin’s clutches.

The boss fight against the leader of the Guavian Death Gang, a local gang of crooks, doesn’t require much skill or brains and forms the end of the campaign. 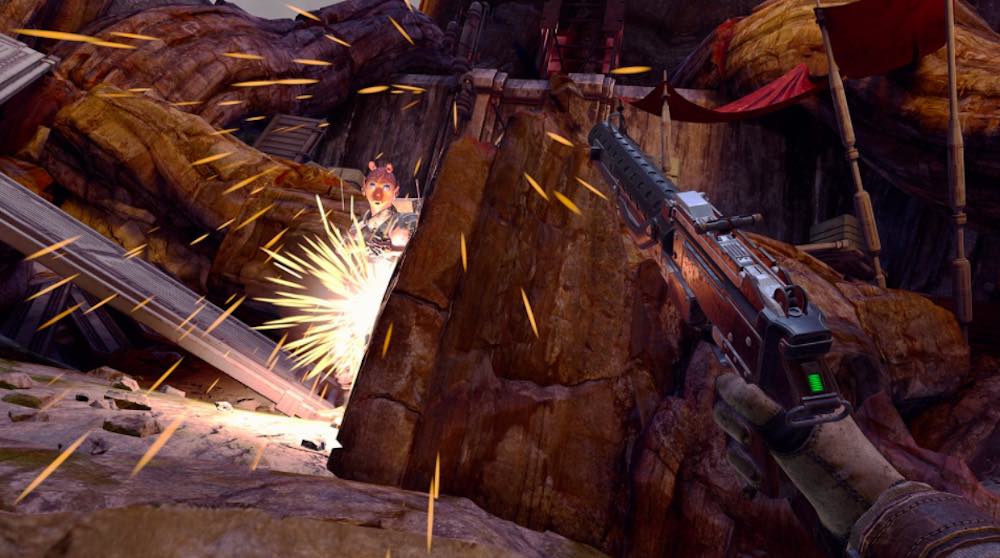 Much of the campaign consists of blaster battles. | Image: ILMxLAB

After returning to Seezelslak’s bar, you’ll hand over to the pub owner several ingredients you’ve collected during your trip to the wilds of Batuu.

As a reward, the bartender will tell you a story that goes back to the era of the High Republic. You’ll relive the plot and take on the role of female Jedi Padawan Ady Sun’Zee, who must confront an ancient evil force alongside Yoda. As in Vader Immortal, here you’ll be able to fight with a lightsaber and use the Force to defeat demonic creatures.

The playable story is detached from the rest of the game and lasts no more than 20 minutes. It represents the first of numerous Tales, with more to follow soon.

I played TGE on the first Meta Quest of 2019 and the aged smartphone chip of the VR glasses groaned noticeably under the load of the graphics calculations. Especially in battles, I rarely had the feeling of achieving a stable frame rate.

You can see in many places that the studio has tried to get the most out of the hardware and to create locations and backdrops that do justice to the Star Wars universe.

Due to the Meta Quest’s lack of performance reserves, the result is not always convincing: blurry textures and flat backgrounds are distracting in outdoor areas, for example. 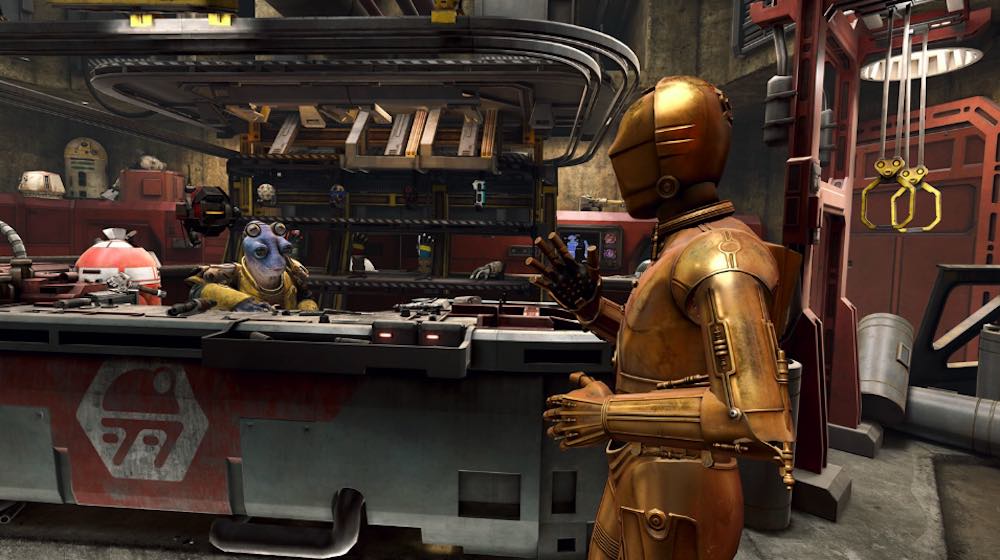 The beautifully animated characters and partly quite detailed environments are among the game’s highlights. | Image: ILMxLAB

Vader Immortal placed great emphasis on a densely told story, a great atmosphere with memorable moments, and became more of a movie than a game.

In TGE, this relationship is reversed: in the campaign, which is the heart of the game, the action is in the foreground and the plot comes up short. If TGE had more to offer than dull shooting, this would be bearable. Unfortunately, this is not the case. That’s why I clearly prefer Vader Immortal to this adventure.

Tales of the Galaxy’s Edge could’ve been much more if the budget and schedule had been right. Perhaps a lot was cut here so that TGE would still be released in time for the Christmas shopping season.

This is supported by the relatively short game length of about three hours and the fact that paid DLCs will be added next year. I hope that they will offer more content than the very short Yoda episode.

In the first of the two new mini-campaigns, you must secure a valuable artifact on behalf of the antiquities’ dealer Dok-Ondar. In the process, you’ll meet Baron Attsmun, a heavily wealthy industrialist whose machinations hide something dark, as well as his adversary, the treasure hunter Lens Kamo, who wants to prevent the relics from falling into the wrong hands.

Your adventure will take you once again into the wilderness of Baatu and explore the ruins of an ancient Jedi temple. Your journey will also take you through Sardeevem Gorge and the Moonsund Caverns, where you will once again have to fight off space pirates and solve puzzles.

In the second mini-campaign, Seezelslak is taken by First Order soldiers to a secret re-education facility on the planet Batuu. Your mission is to free the bartender and destroy the facility.

In the first of two new short stories, you once again take on the role of Ady Sun’Zee. Many years after her battle against a demonic force, Sun’Zee has evolved into a Jedi Knight. In her role, you have to teach the Padawan Nooa – and learn a lesson or two yourself.

In the second short story, you become the assassin droid and bounty hunter IG-88, who accepts a suspicious assignment on the moon of Nar Shaddaa. As it turns out, you’ll have to storm a fortress to take out the gangster boss Triff.

You can see: Last Call brings plenty of new content, characters and locations, and the new mini-campaigns are particularly appealing.

The Jedi School of Ady Sun’Zee is very different from all the other missions. It’s more about atmosphere and thinking about what makes a Jedi than pure action and an exciting plot – a welcome change from the rest of the game.

The contract killing mission as IG-88 is a disappointment: We’re dealing with a simple rail shooter that could just as easily come from a second-rate game of another brand and doesn’t fit Star Wars at all.

Replaying the game with Meta Quest 2, I had great fun with the base game as well as the new content from Last Call. I wouldn’t have thought that a higher resolution and a stable frame rate could improve the experience so much. Especially the blaster battles and the use of supporting droids were really fun with the new VR glasses.

The transition from a cinematic VR experience (Vader Immortal) to a proper game has been successful for ILMxLAB. Now the studio has a foundation on which to expand and deepen the existing game mechanics.

I’m not a die-hard Star Wars fan, but I can say this much: TGE is a VR experience that is dripping with Star Wars atmosphere and should provoke tears of joy from fans of the franchise. From the sometimes quite detailed environments and backdrops to the great animated characters and witty dialogues to the bombastic music, this VR game is as authentic as it gets and designed with a lot of attention to detail.

A general criticism is that TGE seems a bit bogged down and fragmented. I would like to see a continuous world and campaign for the next Star Wars game from ILMxLAB. In TGE you jump from one location to the next and even into different roles. It’s hard to keep track of everything.

The VR game offers a playtime of seven to eight hours. Many additional challenges and in-game achievements will keep you busy for another three to four hours.

You can buy Star Wars: Tales from the Galaxy’s Edge here: