At the Quest Gaming Showcase, Meta is showing mobile VR games with a graphical quality that I would have thought impossible three years ago.

I thought so repeatedly as I watched the event live on Wednesday and spotted little graphics wonders like Red Matter 2, Bonelab, and Espire 2.

Trailers don’t always have to match the actual experience, and in the case of Red Matter 2 and Bonelab, it’s been confirmed that they were shot on PC. But there are strong indications that the mobile versions are not significantly different from the PC VR versions.

Vertical Robot, the studio behind Red Matter 2, wrote on Twitter that the trailer emulates the graphics of the mobile version. Having recently played through the first part, I trust this promise.

Even today, the first Red Matter is perhaps the most beautiful game for Meta Quest 1 and 2, at least concerning graphical realism. The studio is aiming to surpass this achievement with the second part, promising the “best graphics on mobile VR to date”.

It’s recorded on PC but we are emulating Quest 2 graphics. In other words, it’s fairly representative of what you’ll see on Quest 2! A lot of work has gone into modifying Unreal Engine in terms of optimizations and graphics enhancements. We’ll go into more detail sometime soon!

Bonelab studio has released screenshots after the announcements, allowing a direct comparison between the graphics of the Quest 2 and PC versions. The Quest 2 version lacks some lighting effects and the details on the models are lower. Nevertheless, it looks good and similar to the PC version. The game runs at a frame rate of 90 hertz on Quest 2. 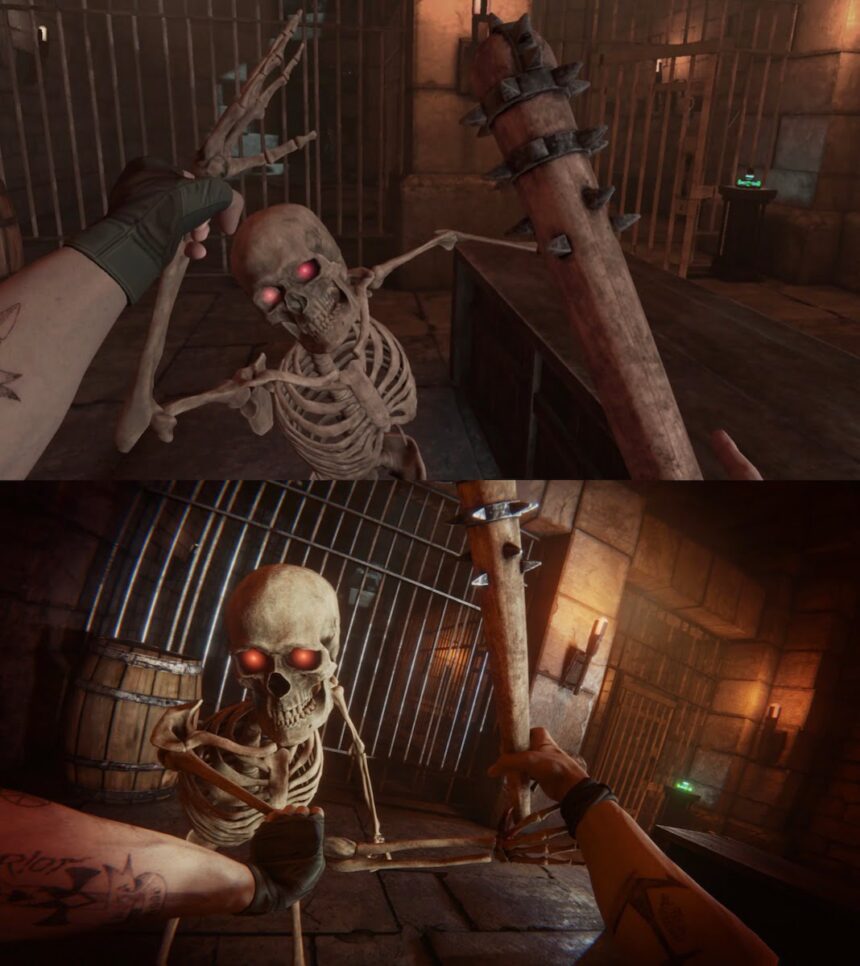 The image above shows the Quest 2 version, the one below the PC VR version. | Image: Stress Level Zero

It is well known from game consoles that games get better and better over the course of a console generation, as studios gain more experience with the hardware and know how to maximize its potential. Similarly, with virtual reality headsets like Quest 2, the underlying technology also stays the same over time. The tools get better, and studios learn the tricks to render more efficiently.

The graphics leap of the Quest platform has another reason: The chip of the Meta Quest 2 renders twice as fast on paper as the Snapdragon 835 in the original Quest. Studios can therefore access a much higher performance if they only optimize for Quest 2 – although the XR2 chip is far from running at full power due to heat buildup and battery life.

One barrier to nicer graphics so far has been that developers had to release their games for both VR headsets. It is clear that they had to develop for the lowest common denominator, and that is the slower Meta Quest 1.

The good news is that the above rule has become more permeable: many new Quest games with more sophisticated graphics are now released only for Meta Quest 2, including the titles mentioned above.

Meta Quest is more or less dead and the potential of its successor can now be fully realized, which is reflected accordingly in the graphics of the latest VR games.

Quest 2 graphics: There is still room for improvement

Is this already the end of the line? Not at all. A new rendering technology called Application Spacewarp promises up to 70 percent more CPU and GPU performance with Quest 2.

Since AppSW was only recently released and studios have yet to implement it into their VR games, it will be a few months before this method further improves graphics. Green Hell VR is already a title that uses the new rendering technology.

Neither Bonelab nor Red Matter 2 currently use AppSW, so there is still room for improvement. Bonelab studio is considering an AppSW implementation to push the physics engine further, while the studio behind Red Matter 2 is also toying with the idea of integrating rendering technology by release. We don’t know yet if Espire 2 will use the rendering technology.

Follow the link to all the news from the Meta Quest Gaming Showcase.