Meta Quest (2): Liteboxer is like Peloton for VR Fitness

The Liteboxer workout device is transformed into a VR app for Meta Quest (2) – complete with rhythmic beats and subscription model.

There are more and more fitness games for Meta Quest 2: A good month after the “sore muscles app” Les Mills Bodycombat, the next ordeal awaits athletic VR users in March. Liteboxer offers a fitness mix of rhythmic punches and real trainers.

In keeping with its name, the app focuses on boxing. Liteboxer will launch in the US, Canada, Mexico and the UK on March 3. The German Quest Store currently lists March 2022 as the launch date.

Unlike in Supernatural, for example, no rhythm blocks fly in from a distance. Instead, you beat up a floating disc directly in front of you to the beat of the music. Once a wandering streak of light reaches the right spot, you’ll have to hit it with various punches. The app measures accuracy, timing, and force (presumably through acceleration). It’s reminiscent of the old amusement park game Whac-a-Mole – only much faster with more punches.

The fitness game requires a paid subscription starting at $18.99 per month. Before paying, users can try out VR training for seven days free of charge, just like the competitor FitXR.

In return, there are “hundreds” of workouts, various progress measurements, and music from well-known artists like Lady Gaga or the rapper YG. Another plus point is the trainer, which is supposed to motivate without being embarrassing.

You can box with the Quest 2 controllers in your hands or directly with your fists. They are captured by the Meta Quest 2 cameras via hand tracking and appear as virtual counterparts in the scenery.

Liteboxer: from a real to a virtual “boxing board”

The app is based on the real workout machine Liteboxer, which was launched in 2020. Imagine a boxing machine from the funfair at home: Instead of just firing one powerful punch, you take turns hitting several illuminated squares constantly. You can set up the machine in your home gym.

The experience is more like a workout with a punching bag. To ensure that nothing tips over or gets broken during the action, the device is either stabilized with a large base plate or mounted on a (stable) wall like a dartboard.

The start-up of the same name was launched by “Spark Capital” co-founder Todd Dagres, among others. The “Will Ventures” fund of NFL player Isaiah Kacyveanski is also among the backers. 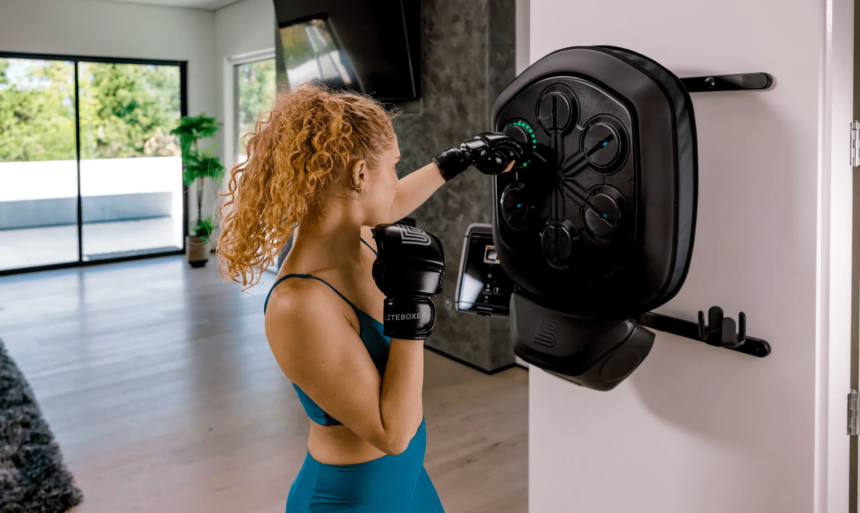 The tablet is reminiscent of the once-popular Peloton bike trainers. | Image: Liteboxer

Buyers of the physical Liteboxer device also have to make a larger investment at first: They pay $1,495 for the device and an additional monthly subscription fee of $29. For that price, music tracks from some big names like Ariane Grande and Nicki Minaj are included, along with classics like “Livin’ on A Prayer” by Bon Jovi and “Push It” by Salt ‘n’ Pepa.

It is not yet known whether all of these songs will make it into the VR implementation. Versions for other VR platforms have not been announced yet.