Creatives have been able to build their own VR worlds in Horizon Worlds for two years now. Since yesterday, the first users have also been earning money with it.

Meta wants to win new customers for virtual reality with its social app Horizon Worlds. The creative online meeting place for Oculus Quest was launched as a beta version around two years ago.

Officially, Horizon Worlds is currently only available in the USA and Canada and is only accessible to users aged 18 and over. Users can switch freely between rooms and tinker with small games, levels, and cosmetic objects directly in the world.

Earn real money in the Metaverse

Participants in the test program create items for sale on a special trade tab, such as a mystic key for a locked area or playful objects like a ball.

However, Meta wants a share of the revenue: Vivek Sharma, vice president of Horizon Worlds, explained the terms to The Verge. Meta initially requires sellers to pay a “platform fee” of 30 percent – the same percentage that game and app studios pay in the official Oculus Store.

From the remaining sum, Horizon Worlds deducts another 25 percent. In the end, only about 53 percent of the original sales price remains with the creator. Of course, they still have to pay taxes on the remaining profit.

“We think that’s a pretty competitive rate in the market,” Sharma defends the model. In this context, The Verge points out that Meta once criticized such practices itself. Previously, Facebook rebuked Apple because the iPhone maker charged a 30 percent fee in the App Store. 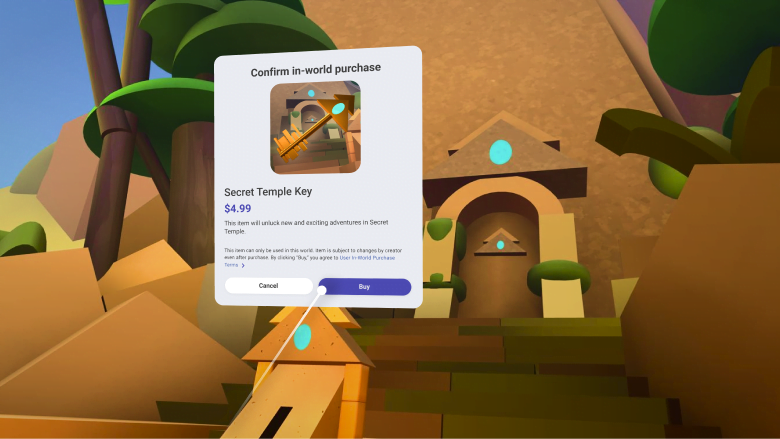 Creators can sell a key to locked areas, for example.

Meta also plans a “Creator Bonus Program” for Horizon Worlds, limited to the U.S., in addition to traditional sales. Those who have most effectively achieved certain goals at the end of the month will share in the monthly payout. Meta already announced prize money of $10 million last October.

In this way, Meta could, for example, create incentives to work with new tools to gain more testers and insights. Since March 2022, aspiring Oculus developers can also sign up for crash courses and learn to build worlds for Horizon Worlds: Meta is providing $500,000 in funding and prizes.

In the long term, Meta is also working on a payment and currency system for its apps and for the Metaverse. According to a Financial Times report, the company is experimenting with an app currency internally nicknamed “Zuck Bucks”. In early April, Meta also announced an advertising partnership with burger chain Wendy’s.

Monetization in the Metaverse: Rec Room leads the way

Meta is following successful models with its monetization attempts: Since March 2021, you can earn money in the social app Rec Room, which is comparable to Horizon Worlds, thanks to a virtual currency. You receive it for selling your own inventions and for other activities, such as when you reach certain game goals.

If you sell around 25,000 tokens a month (equivalent to 100 US dollars), you can become a “partnered creator” in Rec Room and receive real money at the end of the month.

VR users accounted for only a quarter of Rec Room’s active user base in 2021. The social app, once launched for virtual reality, is also available for Android, iOS, Playstation 4 and Xbox. Meta also plans to bring Horizon Worlds to non-VR platforms.