Eve Systems review: What does Thread add to the Smart Home?

If you build your smart home on systems like Alexa or Google Home, you can access numerous smart gadgets. There are countless providers that let you integrate their WLAN, Bluetooth or ZigBee devices with Amazon’s and Google’s control centers. However, you usually have to live with the fact that your usage data is transferred to the servers of manufacturers, Google or Amazon.

The German company Eve Systems therefore develops its products exclusively for use in the closed ecosystem of Apple’s HomeKit. The data is processed locally on the devices. There is no cloud connection as with Amazon and Google. Eve also uses the fast and secure wireless standard Thread, which already makes the devices future-proof.

With the introduction of the universal IoT language Matter, the first uniform industry standard will be introduced in the fall. Devices and systems from different manufacturers will then be able to communicate securely and locally with each other for the first time. This will make Eve devices interesting for non-Apple users. I tested four Eve products and tell you whether the switch is worth it.

Eve Systems: Review in a nutshell

The smart home devices from Eve Systems are excellently manufactured and attractively designed. Well thought-out functions, the fast and stable thread network, as well as the high data protection standard and future-proofing in terms of Matter justify a comparatively high price. You can read more about this in the following test report and the detailed conclusion at the end of the article.

Smart home gadgets often arrive with so much plastic packaging that the garbage can groans. What is noticeable about Eve devices as soon as they are unpacked is that the company largely relies on cardboard. Compared to all the smart home products I have tested so far, Eve clearly scores plus points here. 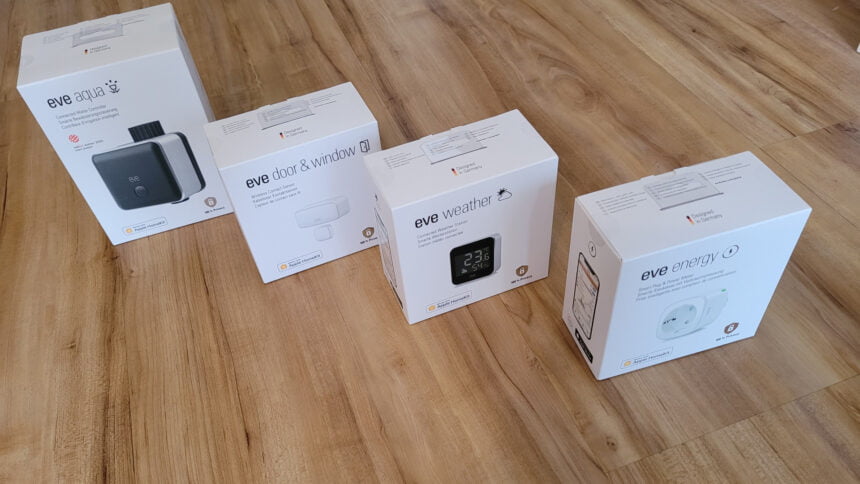 The devices have a high build quality and this much in advance: they all work reliably. There were no disconnections in the test, nor did any of the smart household helpers refuse to work.

The necessary installation materials are included, and there are multilingual instructions in paper form and digitally in the Eve app. Adhesive strips for attaching to doors, windows or walls hold firmly and can be removed without leaving any residue. 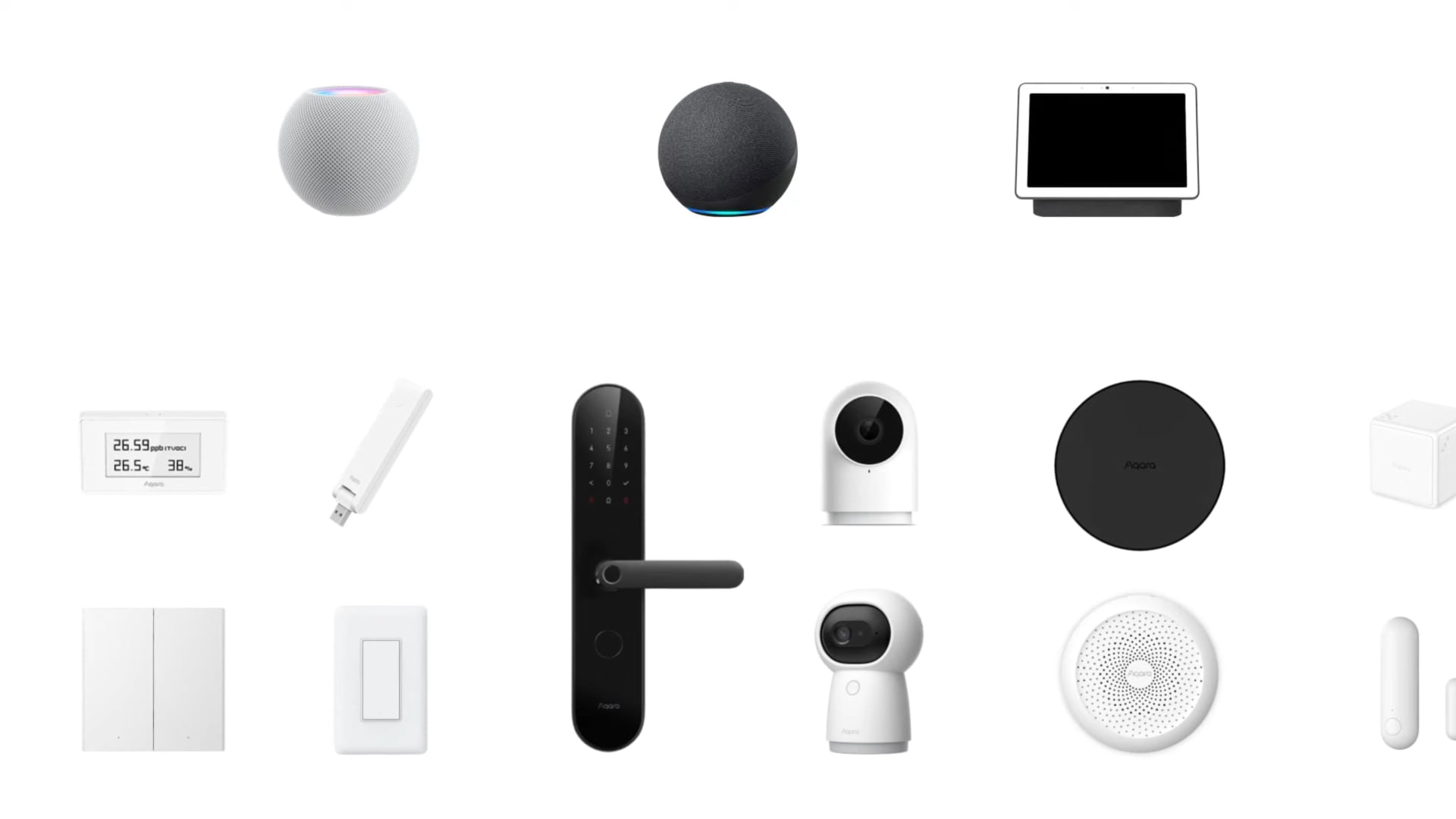 For the test, I integrated the Eve Energy smart outlet, the Eve Weather smart weather station, the Eve Door & Window wireless contact sensor, and the Eve Aqua smart irrigation controller into a network with two Apple HomePod Minis. The whole thing was set up via an iPhone with iOS 15.5. 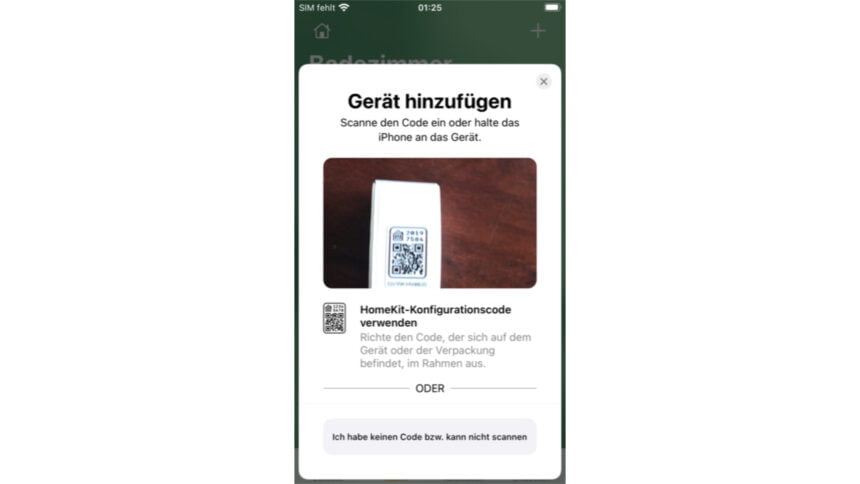 As usual with HomeKit, you can easily set up new devices via the QR code scanner. | Image: Apple / MIXED

Setup is quick and easy. With the iPhone, you scan a QR code attached to the device and HomeKit sets it up. The connected network sets itself up in the background and can be spanned over long distances across individual devices. Communication between the devices always remained stable over several floors and even into the garden. It is controlled via iPhone, HomePod Mini or Apple TV.

The design of the Eve app is reduced and straightforward. Only the setup of automations is a bit cumbersome compared to Aqara or the Alexa routines, since I first have to create a timer in the automation menu and then assign it in the respective device menu. Otherwise, all functions are exactly where you want them to be.

Voice control via Siri works well, but there was sometimes a slight delay compared to control via the iPhone. Unlike Alexa and co., Eve and HomeKit are less data hungry. According to the manufacturers, no data is sent to an external cloud. Everything you do is processed locally on the devices.

Window and door sensors consist of two parts that need to be close together when attached to measure movement when opening or closing. For example, one part goes on the door, the second sticks to the door frame at the same height. 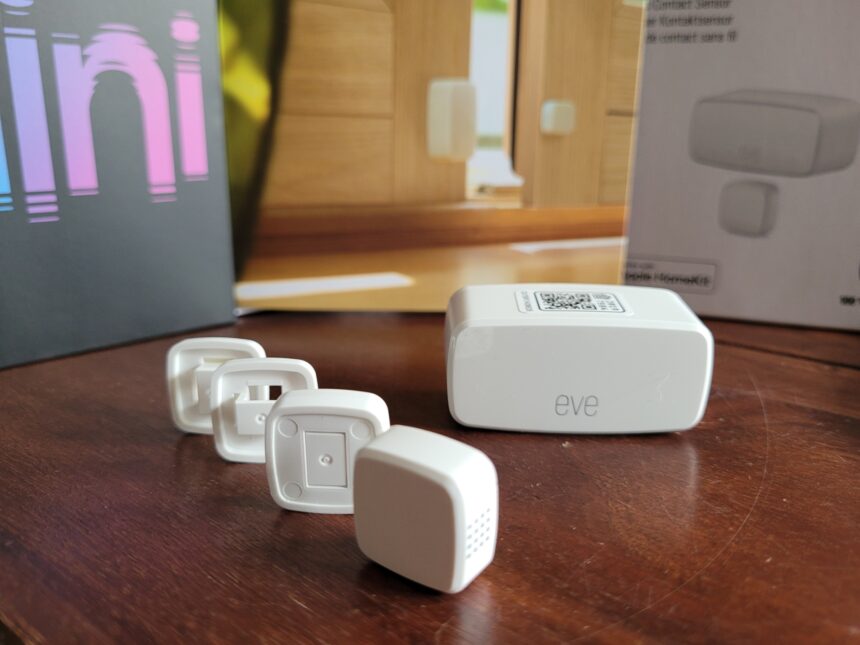 The small sensor of Eve Door & Window can be increased by a clever plug connection. | Image: Eve Systems / MIXED

If the door is rather expansive, these sensors often fail because of their dimensions. The piece on the door frame no longer reaches its moving counterpart on the door. The Eve Door & Window sensor uses a clever plug-in system that allows the small sensor piece to grow taller by connecting several small plastic shims.

This allows it to reach its sensor buddy even on expansive doors. If you don’t need the plug-in connections, you’ll have a handful of plastic waste in your drawer. Advantages and disadvantages are often close together.

Eve Weather is a compact, smart outdoor weather station with a design reminiscent of early iPhone models. The small display shows temperature, humidity and a 12-hour weather trend, which the device calculates from the measured changes in air pressure. All measured values are collected and can be accessed via HomeKit and the Eve app as detailed records. 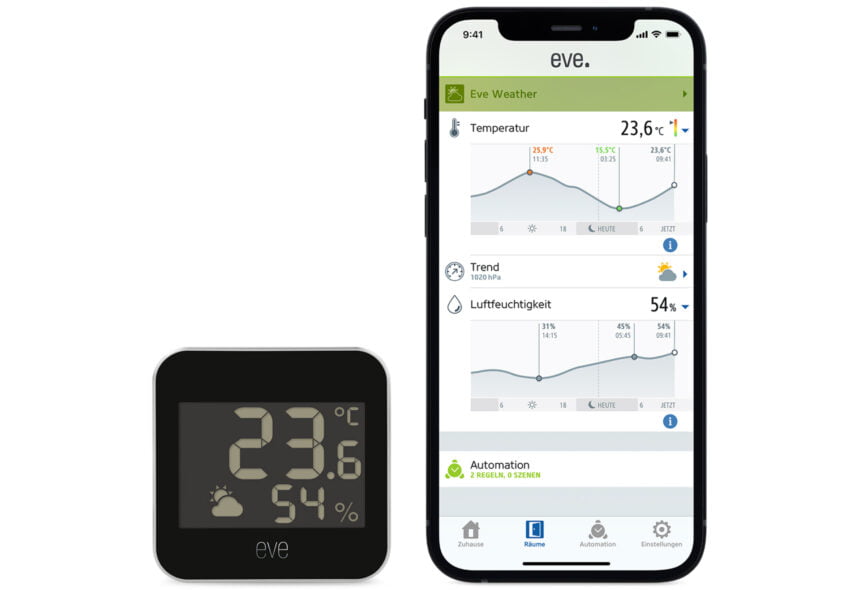 For example, you can read off in which week the hottest temperatures of the year were on your terrace. The small station cuts a fine figure standing up or on the wall, and the display is still easy to see even in direct sunlight. If you’re not within range, all you have to do is ask Apple’s voice assistant Siri.

Due to their design, smart sockets require some space. So before you buy, make sure you have the outlet where you want it. Eve Energy’s smart outlet measures a compact 5.6 x 5.6 cm, but sticks out almost four centimeters from the wall outlet. Aqara’s counterpart has similar dimensions. Other manufacturers like Teckin save 1.5 centimeters in depth, but are significantly wider and taller.

The big advantage of Eve Energy is the comprehensive analysis of power consumption and its efficiency thanks to Thread. In the Eve app, you can see the current and total consumption and can display the costs to date and forecast the expected annual costs.

Eve and HomeKit also do gardening. The Eve Aqua smart irrigation controller is simply screwed between the faucet and the garden hose. The thread is made of plastic, but makes a robust impression. In the test, there were no leaks and the controller worked reliably.

In the center of the device is a simple switch that allows you to control the water flow. Of course, you can also do this on the go via iPhone or by voice command to Siri. In the Eve app, you can create detailed watering schedules and read the water consumption.

The Eve Energy smart socket is incredibly fast. Thanks to Thread, it switches over at the mere thought of tapping the smartphone. There is no noticeable delay between input and execution in the other tested Eve devices, either. Bluetooth connections cannot keep up, and WLAN also has a hard time. Only ZigBee is on a comparable level.

Thread’s advantages are obvious: It is more energy-efficient than WLAN and, unlike ZigBee, does not require a bridge to set up a mesh network. All that is needed for communication is a border router in the form of an Apple HomePod Mini. So you have to be in the Apple ecosystem to use Eve – for now.

The Thread wireless standard built into Eve devices will also play an important role in the upcoming Matter smart-home universal language. Matter is the first unified industry standard for smart home device networking and, among other things, ensures a secure connection for all supported devices, regardless of which system you use. So in the future, you’ll be able to control Eve devices with a Thread-enabled Google Nest Hub 2.

Read more about Matter in my interview with Eve CEO Jerome Gackel, our info guide on Matter and the overview of which devices will support Matter in the future.

Conclusion on Eve Systems with HomeKit

The Thread network runs fast, stable and without a cloud connection. Those who want to protect their privacy in the smart home currently cannot get around Eve and HomeKit. The thread mesh network spans itself independently in the background and ensures latency-free control of all devices.

But Eve makes you pay for the many advantages. The devices from the German manufacturer cost a bit more. In my opinion, the premium over the competition is justified in terms of workmanship, performance and privacy protection.