The new universal smart home wireless standard Matter is expected to launch by the middle of the year. But which devices are compatible with Matter? Are there new Matter products or are manufacturers planning software updates? We clarify this and more in this article.


The new Matter wireless standard is just around the corner, and with it probably the biggest innovation for smart home users since the advent of WLAN: Every smart home system, whether Apple HomeKit, Amazon Alexa, or Google Home, will speak the same language in the future. This means you no longer have to check whether the new smart thermostat can be controlled with Alexa or whether Siri is your contact person.

With the upcoming smart home revolution, questions about compatible devices are also piling up. Because one uncertainty remains: Is my smart tech Matter compatible? In this article, you’ll find out what plans leading manufacturers have, whether software updates will be delivered, or whether you’ll have to bury old devices like the Google Home Mini for good.

We will keep the list up to date until the launch of Matter. We’ll answer more questions in our comprehensive guide to the new smart home standard Matter.

Amazon will prepare existing Echo devices for Matter via software updates. The company made the announcement at its Alexa Live 2021 developer conference. According to the e-commerce giant, it will update “most Echo and Echo Dot devices,” as well as all Echo Studio, Echo Flex, Echo Plus, and Echo Show devices.

According to U.S. media, only the first-generation Echo and Echo Dot smart speakers and the Echo Tap portable Alexa Bluetooth speaker will be left out. As the first device, Amazon wants to equip the Echo 4 with Thread via a software update. So far, the smart speaker supports Bluetooth, Wi-Fi, and ZigBee.

Apple is giving its mobile operating system iOS 15 a Matter update. Like Google Home on Android devices, Apple’s Home app is supposed to serve as a central contact point for all smart home devices. The HomePod Mini acts as a border router on the Thread network. Apple users already control their HomeKit devices via the Home app. The setup and use of new Wi-Fi sockets, smart thermostats, and the like will thus probably remain unchanged in the Apple ecosystem.

The Munich-based smart home company Eve has so far been reserved exclusively for HomeKit users. With the planned Matter support, Eve devices can also be integrated into Google Home, Alexa, or other smart home systems for the first time.

The company announced it will add Thread technology to all Bluetooth devices, making them ready for Matter. These Eve products already have Thread and are thus expected to be made Matter-compatible via a firmware update as well:

At the I/O 2021 developer conference, Google announced which devices and products will be prepared for the new smart home standard. These include the Google Home smartphone app, which serves as the control center for Google’s smart home system. Google’s Android operating system will automatically recognize Bluetooth-enabled Matter devices in the future. 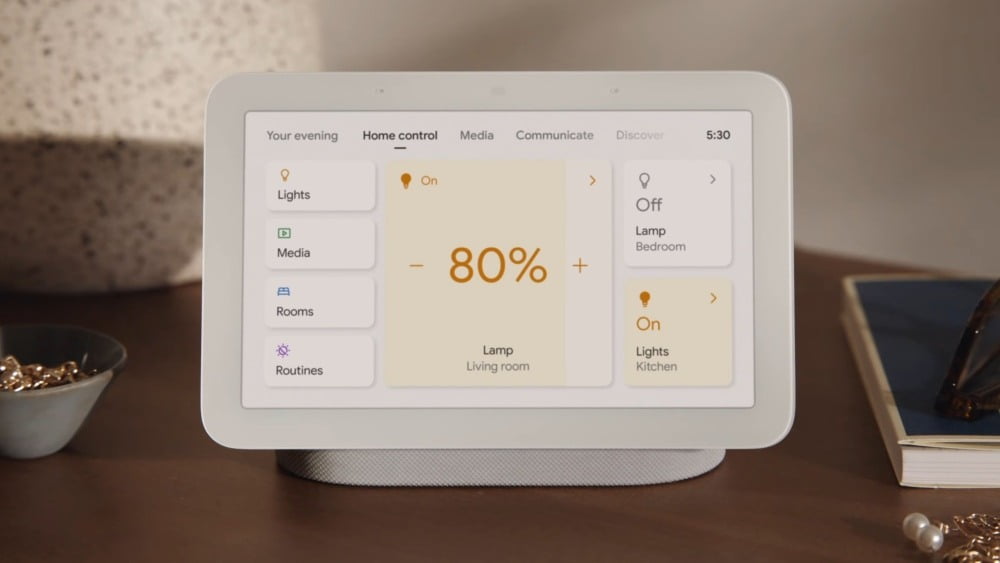 At the CES 2022 electronics trade show, Google announced that Fast Pair technology will be used for this purpose. Fast Pair is already used on Android smartphones to pair Bluetooth accessories like smartwatches or headphones.

This makes it much easier to integrate the devices into the smart home system. As with the Google Nest Cam with a battery, users scan a QR code on the device with their smartphone. The Wi-Fi password stored in the Google Home app or other smart home applications is automatically read in and the rest of the setup runs in the background.

According to Google, the smart display Google Nest Hub 2 will also support Matter. It also has the Thread wireless standard, which will be used in many Matter products in the future.

Here is the complete list of products that Google wants to prepare for Matter via software updates:

Netatmo announced on its company blog that future products will support Matter. The smart-home brand is part of the Legrand Group, which in turn is part of the Connectivity Standards Alliance.

First up is the Netatmo Smart Security Sensor. The sensor is supposed to communicate via Matter-over-Thread with devices from any manufacturer and, for example, turn off the heating when it detects an open window.

Smart lighting manufacturer Signify plans to make its Philips Hue and Wiz brands Matter-enabled. The Philips Hue Bridge is to receive a free software update for this purpose, allowing it to be integrated into a Matter smart home system.

To allow older Philips Hue lights to be used in a Matter system, the bridge will also continue to radio with ZigBee. The manufacturer cannot update existing products from the Wiz brand, which also belongs to Signify. In addition, there is a new product line (market launch: September 2021) that features the Matter logo.

Tuya wants to introduce new products for the Matter launch

At CES 2022, Tuya announced that as a board member and long-time member of the CSA, it plans to launch new components directly at the Matter launch. End customers will find Tuya’s smart home integrations primarily in brands such as Calex, Geeni, and Woox.

According to the Chinese manufacturer, it supplies more than 446,000 smart home developers and provides its own IoT platform via the Tuya Smart app. It is not known whether existing WLAN products will be adapted via software updates.

This should also enable some existing devices to support the new smart home standard. Which these are, Aqara does not yet specify. The OTA update should be available immediately after the official launch of Matter.