According to a patent, Apple could use VR headsets to protect the occupants of the autonomous Apple Car from motion sickness.

A recently approved patent shows that Apple is working on technological solutions to prevent motion sickness. However, the Cupertino-based company is less concerned with VR nausea. Apple wants to use virtual reality to prevent people from feeling sick while driving.

Motion sickness can occur when the actual locomotion does not match the visual perception. This is occasionally the case with VR applications that rely on artificial, fluid movements. The player moves in the virtual world with the joystick, while the body remains still in physical reality.

Symptoms may include malaise, a queasy stomach, or nausea. Motion sickness is not limited to virtual reality, however. Most people make their first acquaintance with the phenomenon during some form of passive movement. Well-known examples are boat rides or car rides in the back seat. It is precisely this type of motion sickness that Apple now wants to combat with virtual reality.

Why is Apple combining virtual reality and autonomous driving?

Virtual reality, augmented reality and autonomous driving are top-priority technologies for Apple. The Cupertino-based company has been working on its XR glasses for years. Mass production of the Apple glasses could start this summer. A market launch is reportedly targeted for the end of the year.

Rumors about a self-driving Apple Car are also persistent. According to speculation, Apple is currently looking for a car manufacturer to take over the production of the electrically driven autonomous vehicle. Hyundai and its subsidiary Kia were recently in talks as manufacturers for the Apple Car. However, the Korean carmaker later denied an agreement.

VR to prevent motion sickness in the Apple Car 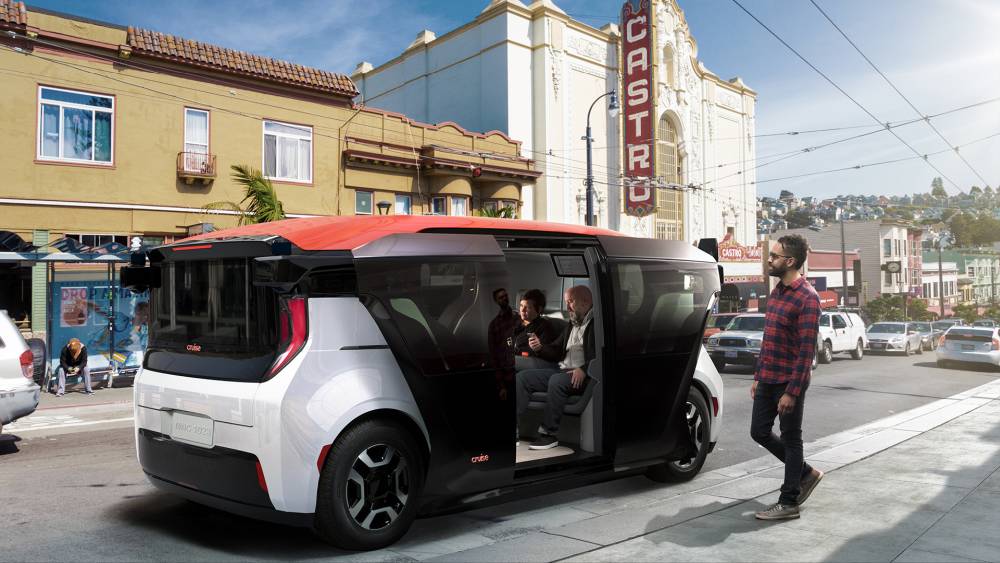 Autonomous driving cabs like the Cruise Origin only have passenger cabs. Seats are also mounted opposite the direction of travel. | Image: Cruise LLC

This creates more space for passengers, who in some cases are placed against the direction of travel. Just the thought of this causes a queasy feeling in many people’s stomachs. Virtual reality is intended to distract passengers from this passive movement and thus prevent the risk of motion sickness.

Apple patent: Here’s what the VR setup for autonomous driving looks like

On May 4, Apple was approved for a patent in the U.S. that shows a combination of a seat, a VR headset and many sensors. Users should be able to call up various applications or screens while driving in the virtual environment.

The peripheral environment in VR is supposed to move in sync with reality. | Image: Apple Inc.

To avoid motion sickness, the peripheral environment in VR should always match the movement of the vehicle. What the system displays and how fast the movements shown need to be is linked to the sensor technology and HD maps of the autonomous vehicle as well as to preset preferences of the passengers.

The virtual environment thus provides a balance between actual and visually perceived motion. The VR headset could also display sections of the real environment. In this way, the user should be able to configure the experience that is ideal for him or her.

Another way to combat motion sickness would be an active seat, according to Apple’s patent. A kind of 4D experience would thus influence the actual movement in addition to the visual perception. 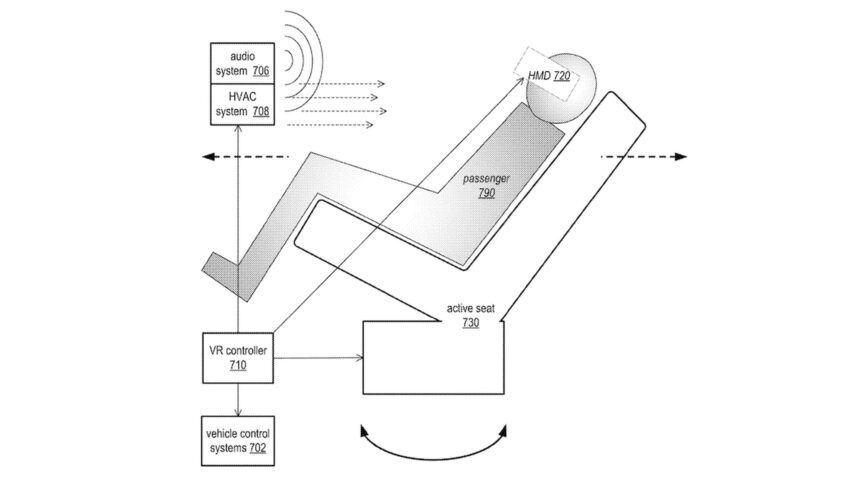 Sensors in the interior would detect movements that could potentially cause discomfort and compensate for them by moving the seat. Similar VR chairs are already being used to combat motion sickness in VR applications.

Those who don’t get nauseous while driving anyway could enter a VR environment that is not coupled with the vehicle’s sensors. This would potentially allow people to work, read, or watch movies in the VR headset during long car rides in the Metaverse office.