A new app concept shows how AR can expand e-commerce

Developers introduce a new app concept for headsets with video passthrough. It lets you design objects like furniture digitally and then order the real components you need.

This year and next, a new wave of VR headsets will hit the market, bringing high-quality video augmented reality to many people for the first time. Well known are Meta Cambria, Apple will reportedly follow suit in January, and french startup Lynx plans to launch its XR headset R-1 in August, beating the big tech companies to the punch. For businesses, there’s the high-priced Varjo XR-3 XR headset, among others.

But what kind of apps make the AR mode of these headsets attractive? Meta has so far only shown a rather unspectacular software demo for Cambria, and the same goes for Lynx, which focuses on the hardware.

Similarly, a team of developers on Reddit is introducing a project called “Quadrobee”: an AR design tool that lets you digitally design and assemble objects – such as a shelf – and then place them in your surroundings. Matching nuts and bolts are added automatically.

If you like the design, you can use the app to order the real components, including the parts needed for the construction. For this purpose, the app gives you a list of the components used with all relevant metrics.

The developer says that he is currently talking to several suppliers who are willing to accept this list as order and deliver accordingly. The vision is that in the end, one click of a button will be enough to order all the components you used for your virtual object. The order is placed through a connected website. 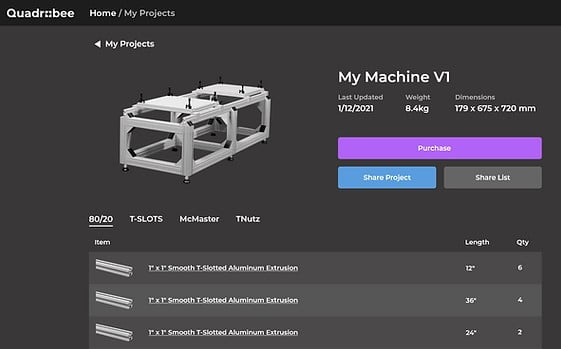 After tinkering in VR or AR, the components used can be ordered online. | Image: Quadrobee

The demo app is implemented with Quest 2‘s AR mode. With the upcoming XR headsets, the video view will be in color and much higher quality. The 3D measurement of the environment and thus the placement of virtual objects in the real world should also be more precise.

For more information and to participate in a beta, visit the official website of Quadrobee.