Two against all: The VR game Everslaught Invasion is a co-op hack’n’slay for Quest 2.

Since July 2021, the hack’n’slay Everslaught has been in Early Access on Steam. The single-player VR game sends players into dungeons and fantasy cities to assassinate heaps of monsters for loot, experience, and of course, honor. The finished version is scheduled for late 2022.

However, the developer studio MobX is already working on a conversion for the mobile VR headset Quest 2. I tried out the VR game at Gamescom 2022.

In Everslaught Invasion, I don’t necessarily have to fight alone. Instead, I can fight my way through the arenas with a friend.

In a preparation room, I choose one of three classes (fighter, rogue, scout) and my weapons. They differ in their handling: The morning star, for example, is slow but does more damage. The sword can be swung faster, but I also have to hit with the edge; otherwise, my attack is useless. Moreover, I can attach a firearm to my left arm, either a machine gun or a shotgun. Since I’m going into close combat with the morning star, I pick the latter. 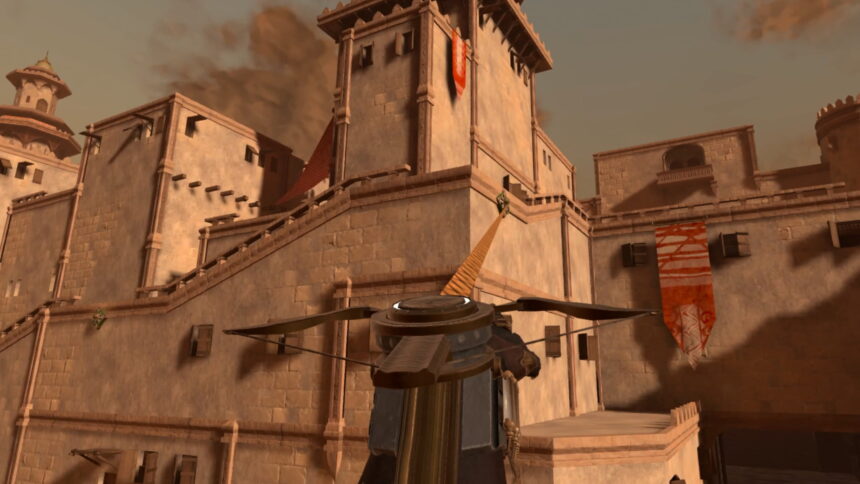 With the grappling hook, I can pull myself up to a higher level or swing through the arena in the blink of an eye. | Image: MobX / Fast Travel Games

The Desert City Arena uses simple, functional graphics. There isn’t much time for detailed observation anyway: As soon as the arena gates close behind my teammate and me, claw-armed monsters attack us.

Now things get hectic: With smooth analog stick movement, I pounce on the enemies and give them a good whack with the weapon at the right moment. If my timing between the forward movement and the weapon swing is just right, I do more damage. This also works with the Dash, which I trigger with a button press and which catapults me forward quickly.

With a grappling hook on the upper wrist of my left arm, I can also quickly propel myself to higher levels via fixed points in the arena or, with a little practice, swing halfway across the arena.

Since the game is quite hectic and mixes different forms of locomotion, motion sickness might become a problem for some players. The developers say that the particularly fast movements don’t cause any discomfort – and indeed, I didn’t have any stomach concerns – but that’s certainly not the case for everyone.

However, the fast locomotion and especially the dash in combination with my right arm’s attack swing triggered balance issues for me. My brain can only poorly compensate for the difference between virtual and real movement. I have to be careful that the virtual swing of my avatar doesn’t knock me over.

Instead, I have to balance my body with muscle power, even though it hasn’t generated a bit of kinetic energy. It’s fascinating how VR affects my brain and body.

After a while, I get used to it, and then it’s all about killing monsters fast. Everslaught Invasion is blazing fast and combined with the muscle strain and constant hammering, it’s also sweat-inducing. But there’s also an underlying flow of gameplay action that’s pretty fun: when I swing my grappling hook at an undead and give it a good whack, it just feels right.

The completed game will include role-playing elements, such as a progression system. Players collect loot and money and can use them to improve their equipment and learn new skills.

It remains to be seen how motivating the design of the game will ultimately be. The gameplay was already quite smooth in my demo and reminded me positively of games like Serious Sam (VR). However, the monster animations are still rather choppy, even if that is hardly noticeable at the game’s speed.

Adding a co-op feature to the Everslaught gameplay for Quest 2 is certainly a sensible decision, both from a gameplay and a business perspective. However, early buyers of Everslaught on Steam see it differently: There, the VR game, which actually has a very good rating, has recently received negative reviews complaining about the lack of updates for the Early Access version.

Everslaught Invasion is scheduled for release in early 2023 for Meta Quest 2 and will be published by Fast Travel Games (Wraith: The Oblivion Afterlife, Cities: VR).