In her report on VR in medicine, one author asks an interesting question: Can virtual reality replace painkillers as a therapy?


Author and physician Helen Ouyang accompanies chronically ill people during VR therapies for her report. She talks to experts and developers and shows how virtual reality could help to overcome the painkiller crisis in the USA.

Julia Monterroso, 55, has been suffering from abdominal pain for 18 months. She has already had to give up her job as a cleaner following back surgery and worsening symptoms.

She is now undergoing VR therapy at Brennan Spiegel’s office to relieve the chronic pain. The gastroenterologist is leading one of the largest medical initiatives investigating virtual reality as a health therapy. 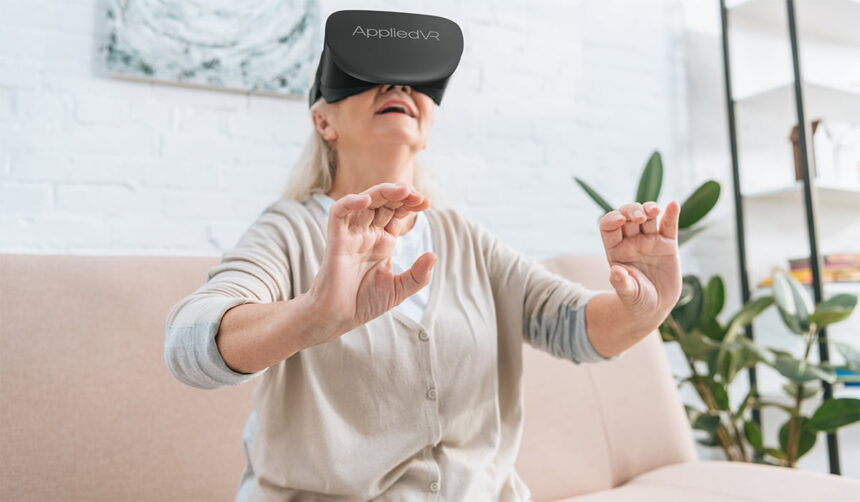 The VR experience puts Julia on a footbridge in a lush forest among giant trees. She begins to tremble and eventually bursts into tears: “I feel like I’m here with my son,” the woman explains. The 21-year-old died in a car accident last June. Hiking in Yosemite National Park was their shared passion.

Therapist Spiegel explains that such intense reactions are common. During the sessions, he keeps an eye on the heart, eyes and cognitive load on the monitor. At this moment, Julia is treating herself, he explains.

The patient switches to a virtual beach landscape. Accompanied by mandalas, she performs breathing and relaxation exercises. Her heart rate slows down, the pupils become smaller, Julia relaxes. She has no pain presently, she reports after the VR experience. Compared to conventional breathing exercises, the experience in virtual reality is significantly more relaxing, she says.

Julia then switches roles and becomes a doctor in virtual reality. Guided by a virtual assistant, she treats a patient with chronic abdominal pain, learning the physical processes in the body.

Brennan Spiegel writes in his book VRx: How Virtual Therapeutics Will Revolutionize Medicine that VR has the unique ability to convey the feeling of simply being there – wherever “there” may be.

“All of its revolutionary potential tumbles out of its ability to compel a person’s brain and body to react to a different reality,” Spiegel writes. People would use about fifty percent of their brain for visual processes.

Spiegel continues, “Bombard the eyes with spectacular and dynamic visions, and next thing you know, those three billion neuronal firings per second will ricochet through half the brain to process the overwhelming load of visual data.” In Julia’s case, the pain disappeared as a result, he said. It was as if she had taken a hallucinogen, he said.

She had gained insights into how she could change her life. Her amygdala was “on fire,” Spiegel describes the processes in Julia’s brain. The exact effects of VR on chronic pain are not yet fully understood. What really counts for Spiegel, however, is whether VR therapy works or not.

The highly recommended report by Helen Ouyang, herself an emergency physician, can be found online at the New York Times. Ouyang describes in detail the problems of pain therapy and how the opiate crisis in the USA came about.

She also highlights studies and developments in VR therapies and how they could prevent substance abuse. To that end, Ouyang also visits AppliedVR, the maker of a VR app used to treat pain and help with painkiller addiction.

AppliedVR works with more than 200 healthcare providers and has been working on EaseVRx for seven years. In 2021, the startup received $29 million in investment funding. According to the company, more than 60,000 patients are already benefiting from VR therapy.

The U.S. Food and Drug Administration (FDA) issued a special approval following a successful control trial: EaseVRx may be used for the treatment of firomyalgia (muscular rheumatism) and chronic back pain.