The advanced display technology reportedly enables a high contrast ratio of 100,000:1 CR and a brightness of 1,000 nits, only slightly below the level of current HDR TVs. The Rayneo X2 can also work outdoors. Competing models often have problems with visibility of superimposed computer graphics in such high-light conditions.

Applications fall more into the realm of smart glasses than full-fledged AR glasses like the Hololens 2 or Magic Leap 2. The Rayneo X2 serves as an assistant superimposed in the field of vision in everyday life. The smart GPS navigation uses a SLAM algorithm in combination with gesture recognition.

While moving, its mapping shows points of interest and important locations turning walks and bike rides into entertaining city explorations. Notifications keep users up-to-date via Bluetooth connection to a mobile device. A chip from Qualcomm’s XR2 platform works inside. Which chip remains a mystery.

Another core function of the Rayneo X2 is real-time translation of multiple languages. A user sees subtitles while speaking, or shortly afterward. This should be useful mainly for business trips or for learning languages. Back in May 2022, Google showed off a pair of tech glasses for similar universal translation.

Other features include hands-free video recording with image stabilization and various extra modes including night shots and slow motion. There is also a “whisper mode” for the integrated sound, which creates more privacy for wearers – and more comfort for those around them.

The TCL Rayneo X2 will be available to developers in the first quarter of 2023, but only in select regions. TCL wants to prepare compelling content for a later commercial launch. This also includes some AR games that TCL develops itself. A device price is not yet public.

Not quite as modern is the TCL Nxtwear S video headset based on the older Nxtwear Air available in Asia. After connecting to a smartphone or laptop, it displays a virtual 130-inch screen from a sitting distance of 16 feet for conventional media. 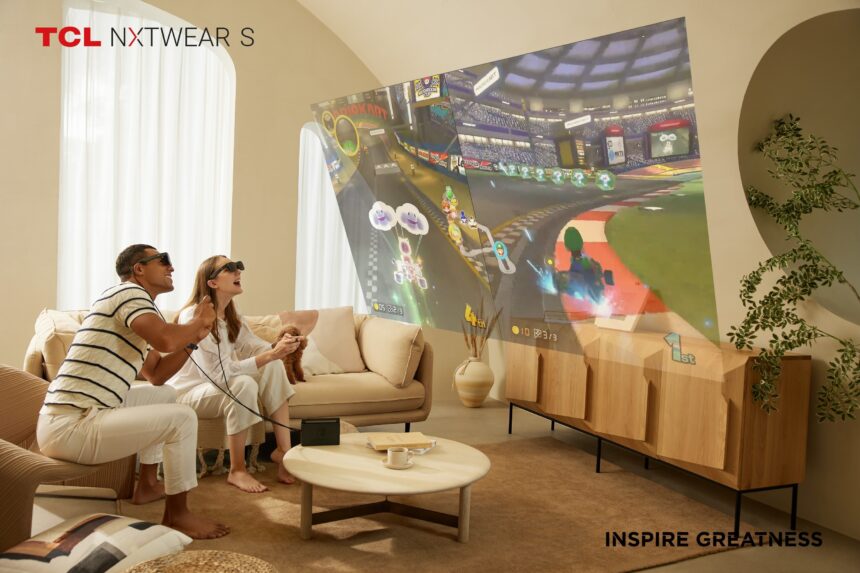 The TCL Nxtwear S displays a virtual screen in the room. With separately available adapters, two headsets can be connected to a Nintendo Switch, for example. | Image: TCL

In addition to two 1080p OLED screens, active noise cancellation for ambient noise is built in. After successful crowdfunding campaigns on Kickstarter and Indiegogo (starting at $349, still active), TCL plans a release in the US at a price of $399.

The TCL Nxtwear V VR headset is a concept model tailored for wearing comfort, weighing just over half a pound. The display, made by TCL’s panel manufacturer SCOT, offers a 108-degree field of view as well as a “super-sharp” pixel density of 1512 pixels per inch.

This model also uses an XR2 chip. Interesting features include integrated diopter adjustment from zero to 700 diopters as well as video viewing with two front cameras.

The resolution is 2280 by 2280 pixels, assuming the concept model is identical to a headset presented on Rjoytek.com. The LCD manufacturer from Shenzhen also reports about developments in the VR industry on its website.

The “All-In-One VR Headset-TCL V1 was presented at the 2022 World VR Industry and Metaverse Expo in November, with special space-saving pancake lenses, a refresh rate of 90 hertz and a response time of 4.5 milliseconds.