StrikerVR Mavrik Pro Developer Edition to be launched in November

The StrikerVR Mavrik-Pro Developer Edition is available for pre-order since October 4, 2022. Shipments are scheduled to start in early November. The package includes a Mavrik-Pro, a power adapter with EU and UK adaptors, and a charging cable.

In addition, customers will have access to the full Software Development Kit (SDK), which includes developer tools, the Haptic Library, Device Manager software, digital assets and more. Support Center and Discord access are also included. Mavrik-Pro Developer is priced at $965.95.

StrikerVR’s new haptic VR gun is set to debut for consumers. Now we have technical details and the release date.

The US start-up StrikerVR specializes in high-quality VR rifles for arcades. The devices offer haptic effects, such as realistic recoil when firing the virtual gun. Depending on the model, the price is at least $1,200.

Last year, the startup secured a $4 million investment and announced the first haptic VR gun for consumers. It was supposed to support PC VR headsets as well as Meta Quest 2. Now we know the first technical details, the price, and the release date of the first version.

VR arcades get the edge

When it was announced last year, StrikerVR was targeting a price of around $500 or less for the consumer version. At the time, StrikerVR left open how tracking would work and what haptic elements would be integrated.

Now the startup is unveiling the “Mavrik-Pro” but continues to leave questions unanswered. First, the facts: The haptic VR rifle is available for pre-order now exclusively for VR arcades at a price of $1,000 and is scheduled to ship in October.

The announced version for consumers is planned for 2023 and should be cheaper. StrikerVR leaves it open whether the targeted price of a maximum of $500 will be met.

The Mavrik-Pro for home use is to be available in different colors. For inputs, there is a touchpad on the front and a button near the shutter release, which is equally operable for right- and left-handed users. 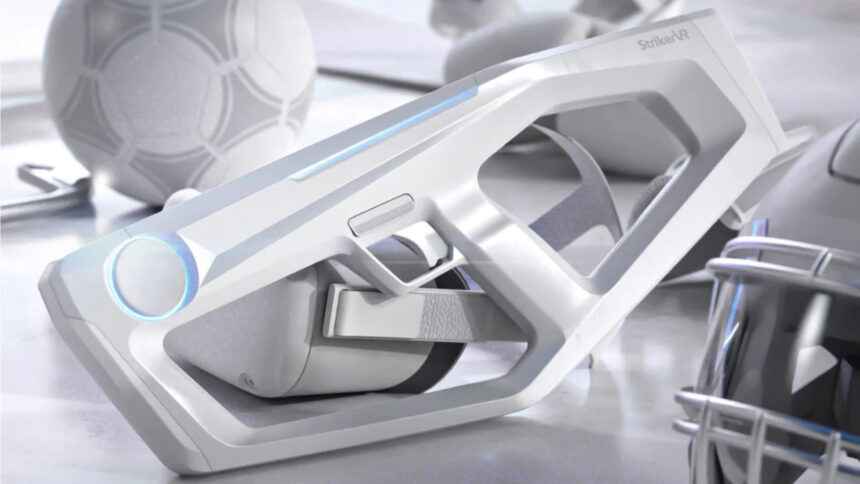 The new features include two buttons on the front, which are supposed to offer more interaction possibilities in VR games, and several capacitive sensor surfaces. These are supposed to register how the gun is held or enable movements like reloading a shotgun.

Inside, three small haptic motors work for the first time: the main recoil module “Thunder” is supposed to make large explosions perceptible and is supplemented by two “Cricket” modules for more subtle haptic impacts. In the previous flagship model “Arena Infinity” there was only one large motor.

With the different haptics modules, StrikerVR wants to offer developers more possibilities to adapt effects to their VR games. It is not yet clear which VR games will be supported.

It is not apparent from the announcements so far whether end users will have to reckon with technical restrictions. Regarding tracking, there is a hint that the Mavrik Pro will be available as a bundle with system-specific integrated or external tracking modules.