The Simula One VR headset is aimed at professionals, for example for design or work in the VR office. A clear, sharp image is particularly important here. The manufacturer wants to increase the perceived sharpness in the center of the image with an optical trick.

The planned Kickstarter project “Simula One” is marketed by its makers as a premium product all around, at a lavish price of $2,799 (Kickstarter version) or $3,500 (regular version). After all, the Linux-powered “VR computer” is not only a VR headset, but should be able to replace classic work devices like desktop PCs and laptops.

This also includes optics that should cause as little eye strain as possible, even when working overtime. In its blog, the startup SimulaVR explains the optical tricks it uses to get the most out of the screens’ resolution.

In the essential center of the image, the Simula One achieves a high value of 35.5 PPD (Pixels Per Degree). This is despite the fact that only around 24.48 PPD is possible with the conventional screen at a resolution of 2448 x 2448 pixels per eye.

Simula One: More pixels for the center of the image

The main lever for this trick is that the sharp center of the retina gets to see more pixels than with conventional VR lenses. This is achieved by already greatly expanding the center when rendering the image, while the areas at the edge of the image are rendered narrower. The optics have the opposite effect and geometrically adjust the image to the original proportions. 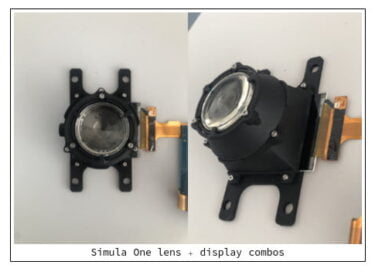 Limbak supplies the lens system for Simula One. | Image: SimulaVR

When looking through an optical assembly of three lenses, the pixels are pushed together in this way. The center of the image therefore consists of a large number of pixels, which ensures that text that is normally viewed directly is easier to read in the VR office, for example.

The basis for this optical design is the realization that in stereo vision only a relatively small area of the image is perceived by the sharp center of the retina, namely in the range of 30 to 35 degrees.

In addition, the eyeballs move very little to the side in everyday life. 90 percent of all eye movements are limited to a viewing angle of only 15 degrees, according to a study by the lens manufacturer Limbak.

Those who want to learn more about the optics will find what they are looking for on Simula One’s official blog. There, the manufacturer insists that pixel density in the VR industry should be measured in PPD (pixels per degree) and not in the classic PPI (pixels per inch).

After all, the number of pixels in certain areas in front of the user’s eye is important – and not how close the pixels are together on the screen. A further increase in PPI values would be relatively difficult to implement on classic VR displays anyway. The exact display technology of the Simula One and the start date of the Kickstarter campaign are not yet known.

Sony’s Playstation VR 2 could go a different way for more perceived image sharpness: with a resolution of 2000 × 2040 pixels per eye, Sony’s upcoming PS5 VR headset is admittedly only slightly ahead of the Meta Quest 2 (1832 x 1920 pixels).

However, integrated eye tracking could enable foveated rendering. With this rendering method, only the image in focus would always be rendered with full resolution, while the peripheral image is displayed with reduced resolution. This saves computing power.