Relive the horrific hostage crisis at the 1972 Olympics in VRChat

What happened when Israeli athletes were taken hostage at the 1972 Olympics? A VR experience by Bayerischer Rundfunk retraces the events in VRChat.


It was supposed to be a happy sports festival. Participants and visitors from all over the world were supposed to meet and enjoy fair competition at the Olympic Games in the summer of 1972. But then everything turned out differently: an act of terrorism overshadowed the Games. In the morning hours of September 5, 1972, eight Palestinian terrorists entered the accommodation of the Israeli team.

The assassins killed two athletes and held nine others hostage. There were negotiations with a German delegation, and one ultimatum after another passed. This was followed by a rescue operation by the Bavarian police, which turned into a complete disaster: All eleven hostages died, five terrorists were killed, three arrested. One policeman was also killed, another seriously injured.

Bayerischer Rundfunk wants to convey the memory of the events in virtual reality and created the VR chat world “Munich 72”. And this is how you can find the world “Munich 72” in VR Chat: Simply search for “Munich” or “München” in the search field at the top right (“Search”), then you can enter the corresponding world by clicking on it.

I first enter a locker room with bags lying around, balls and some introductory info panels. On the roof of the Olympic Tower – or at least its simple virtual replica – I then experience a 360-degree panoramic view of Munich: It looks deceptively real, but that’s not what matters here. 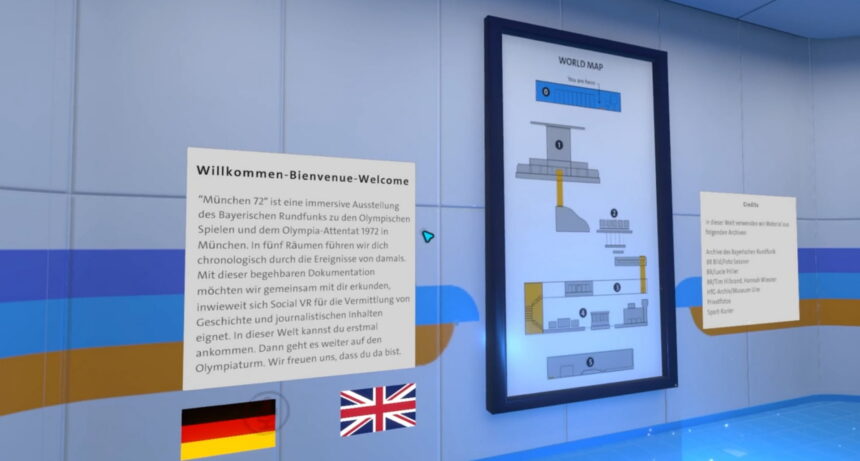 In a total of five rooms, I learn something about the Israeli athletes who competed in Munich at the time. Chronologically, the rooms approach the events of September 5, 1972, which ultimately ended in disaster.

At first, however, everything is still upbeat and cheerful. Casual ’70s music plays in the background, rooms with orange wallpaper exude the charm of the era, and old TVs show reports from the big sporting events. I can compete with other visitors in a hurdle race (they even time it), play a little basketball, or just relax in a chair on the green lawn.

In the VR experience “Munich ’72,” visitors can experience recreated locations of the tragic events surrounding the assassination. The image shows a living room for the athletes. | Image: Bayerischer Rundfunk

In one of the dormitories, where the athletes were accommodated at the time, it slowly becomes hectic, threatening. On the radio and on television, the news reports about the hostage situation. The clocks on the wall are racing, a telephone won’t stop ringing. A feeling of unease spreads.

I don’t relive these disturbing events virtually – the VR experience is more about the facts on one side and the feeling of helplessness and grief on the other. In a virtual place, the athletes who were killed are remembered – their names are read out and I learn who they were. 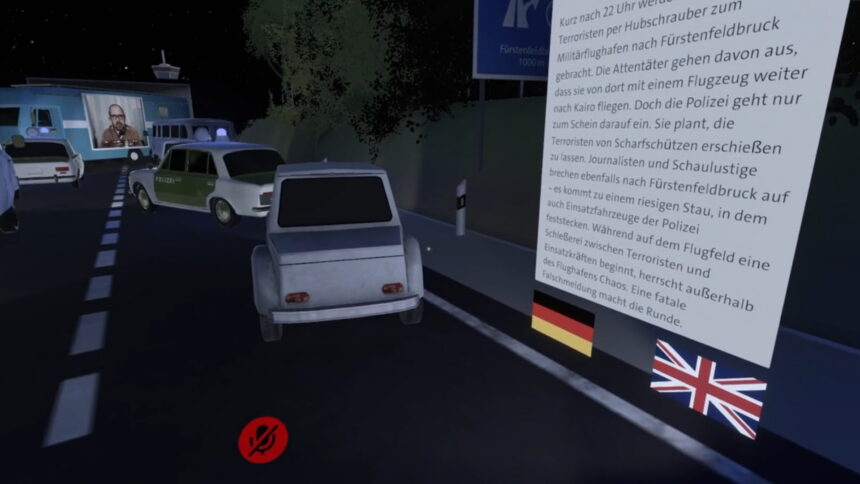 The VR experience works primarily with text and eyewitness accounts such as videos and images, in relatively simple environments designed to convey a sense of place. | Image: Bayerischer Rundfunk

BR calls the VR experience a “walk-through documentary” that ventures into a world with entirely new possibilities. “Together with you, we would like to explore the extent to which social VR is suitable for conveying history and journalistic content,” a text welcomes visitors.

It would be conceivable, for example, for historians to accompany the interested public on a kind of guided tour. There is also a small conference room in the airport building where there will be live meetings around the 50th anniversary of the Olympic Games and the assassination respectively.

This way of bringing historical events to life has a future and is original. Even if the use of social VR zones is not always intuitive: I see fantastic possibilities here.

Admittedly, the graphics of “Munich ’72” still have room for improvement – VR games can offer more these days. But the premise of bringing events from the past back to life in virtual reality is definitely a forward-thinking idea for education and history classes, in my opinion. Plus, social VR apps like VRChat are free and present a comparatively low hurdle for VR novices.

Thanks to the successful VR experience “Munich ’72,” I can now understand a little better how awful it must have felt when terror and murder poisoned what should have been the beautiful event of the Olympic Games in the summer of ’72.