Nvidia’s CEO Jensen Huang gives insights into the company’s metaverse efforts at his GTC keynote. Besides the Omniverse Cloud, there is new hardware and features.

Nvidia sees the metaverse as the 3D evolution of the internet. The company’s focus is currently primarily on the “industrial metaverse.” Digital twins of factories, simulated rail networks, radio tower simulations, robot training in simulation, collaborations in 3D development, and other enterprise use cases for connected virtual spaces.

Nvidia’s Omniverse is a platform for developing and running metaverse applications, he said.

“The Omniverse is a large-scale, real-time 3D database. It is a shared 3D world,” Nvidia’s CEO said. “Omniverse is a network built on USD. It connects 3D worlds.”

To give even more companies and individuals access to Omniverse, Nvidia launched Ominiverse Cloud. The service is designed to leverage technology from Geforce Now, such as low-latency streaming of interactive 3D graphics experiences across edge devices in 100 countries.

Design 3D workflows with one click and take advantage of all of Omniverse’s features, such as physics simulation, ray tracing, and AI features, without the need for powerful edge devices.

As part of the GTC, Nvidia also plans to show the first examples of web-based USD experiences. Also coming with Siemens JT support is a USD connector that opens up the Omniverse to all CAD workflows.

This system consists of three elements: RTX computers for creation, design, and engineering, OVX servers that connect to the Nucleus database and run virtual world simulations, and Nvidia’s Graphics Delivery Network via Geforce Now as a portal to Omniverse. 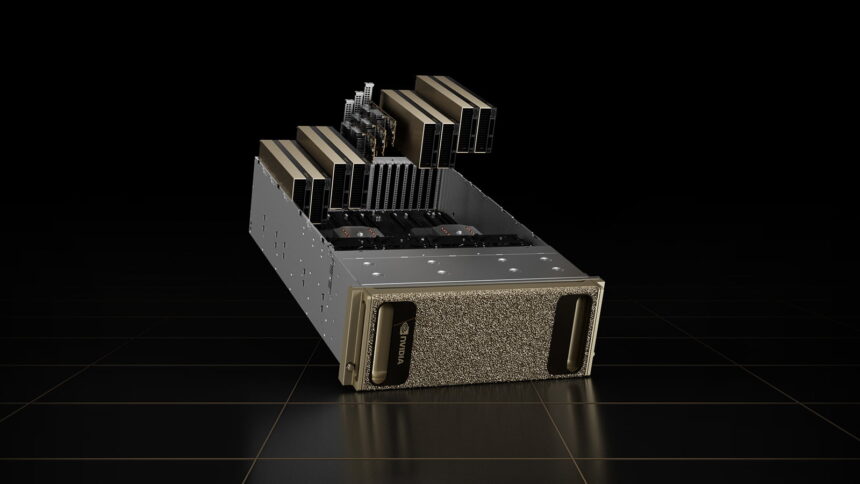 Nvidia’s second-generation OVX is expected to bring high-resolution graphics to the Edge via Omniverse Cloud and Geforce Now. | Image: Nvidia

Nvidia’s second-generation OVX platform is the metaverse counterpart to the HGX H100 AI platform. Instead of AI calculations, OVX accelerates metaverse applications like digital twins. The second generation OVX is expected to be available in early 2023 and relies on eight L40 GPUs from the new Ada Lovelace generation. For the Omniverse platform, OVX handles graphics-intensive virtual world simulation, while HGX handles AI workloads.

As part of the GTC, several companies showed how they used Omniverse. There were a few examples on display during the keynote. Heavy.ai is building Omniverse, a framework for digital twins for telecommunications companies. According to Nvidia, this enables companies to better plan for the construction and operation of networks.

Lowe’s , showed off its first digital twin for the retail industry. With a digital copy of a store, the company better understands sales performance and tests thousands of store layouts, simulates customer flows from historical data with AI, or adjusts individual shelves and merges data from different stores.

The digital information can also be viewed by employees in AR with glasses such as the Magic Leap 2. The digital twin thus becomes an AR copy, superimposed over reality.

With the realistic and physically correct simulated copy, DSD aims to develop high-performance perception, prevention, and management systems to optimally detect and respond to irregular situations in daily rail operations. An example might be fallen tree trunks or people on the tracks. The ultimate goal is a completely automated train network.