Flamara slides into a wall, Psiana sits two backyards away, and Nachtara simply doesn’t show up at all. Pokémon Go players know that Pokémon Go’s AR mode still has a lot of room to grow for a more immersive, collaborative gaming experience. With VPS, Niantic aims to change that and much more.

Place digital elements in the real world with centimeter precision

The location system, which Niantic presented in detail for the first time at the beginning of May, can locate digital elements in reality with centimeter precision. In addition, players can view the same digital elements from different perspectives.

The system is based on a digital twin of a location, which is reconstructed from the images and scans of Niantics’ community of players in AR games such as Pokémon Go or Ingress, among others. VPS is active within this 3D map of a place in an area of about ten by ten meters. The smartphone locates itself based on the camera image. According to Niantic, a single frame of the surroundings is enough.

Niantic now announced the launch of the interface for its Lightship API at its developer conference. According to Niantic, 30,000 locations with VPS support exist worldwide in publicly accessible places such as parks, paths, landmarks and local businesses.

VPS distribution is particularly dense in the cities of San Francisco, Los Angeles, Seattle, New York, London and Tokyo. Here, Niantic has provided additional help with its own 3D measurements. By the end of the year, VPS should be available in more than 100 cities. The big vision is that one day VPS will cover the entire globe – then Niantic would have the infrastructure for a comprehensive AR cloud.

Niantic is preparing for this AR future with its new Campfire application: The company calls it a “real-world social network,” meaning a social network that is integrated into the real world and connected to real places.

Players can use the platforms to find each other or discover content and events, for example. Campfire will first be incorporated into Ingress as an additional layer and then gradually into all other Niantic apps. 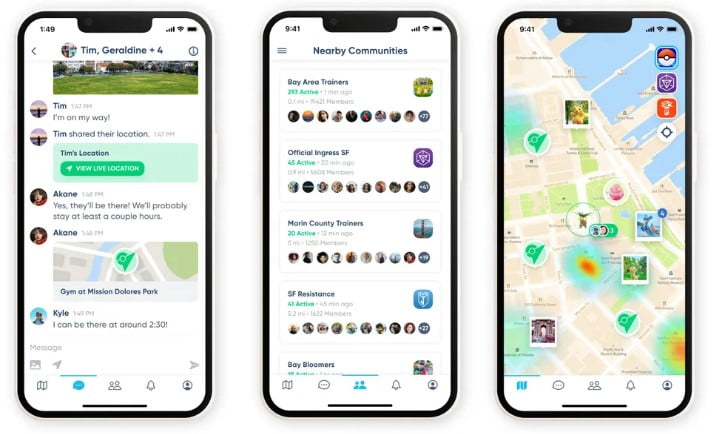 With Campfire, Niantic is building a social network around real-world locations. Campfire will be integrated into Niantic’s game apps. | Image: Niantic

AR developers can now create their own AR apps and offerings for Niantic’s VPS through Niantic’s development platform and add additional locations to the 3D map using the Niantic Wayfarer app. For more information, visit the Niantic blog.

The interesting question is whether and how Niantic will be able to prevail against Google Maps with its own VPS. Google has been offering visual positioning via AI image analysis for years, which Maps users can use to embed AR direction arrows precisely at intersections or in streets.

According to Google, VPS is more accurate than GPS, especially in cities. Google uses images from Google Street View for its own VPS, so it has access to an almost unlimited data stream of visual information that Niantic first has to organize via its player community or otherwise.

In mid-May, Google made it clear that it claims the AR cloud with the Geospatial API and an immersive 3D view for Google Maps.

It’s possible the two companies are teaming up again to achieve their goals faster. There is a shared history: Niantic was founded in 2010 by current CEO John Hanke as an internal Google startup before setting up on its own in 2015.

What’s more, the success of Pokémon Go and co. is also based on Google’s Maps services. Niantic could provide detailed visual information in the close-up range via the player scans, Google does the wide-area orientation via Streetview.