Meta has seen better days, yet Mark Zuckerberg continues to invest aggressively in VR and AR. But he also says that the metaverse is still a long way off.


Yesterday, Meta Platforms presented its financial results for the first quarter of 2022, and the results were mixed: While revenue was lower than analysts predicted, Meta was able to grow again in daily Facebook user numbers. The stock market reacted positively and allowed the value of the share to rise by more than 15 percent after trading hours.

As expected, the metaverse business delivered sobering results. Expenditures for the VR and AR division Reality Labs amounted to almost three billion US dollars in the first quarter. Meanwhile, revenues were only 700 million US dollars.

Mark Zuckerberg accepts this incredible disparity and is even holding out the prospect of even greater investments – at least “over a period of time.” Just under 18,000 of 78,000 employees work on VR and AR technologies, according to a leak. That’s 23 percent of the workforce. 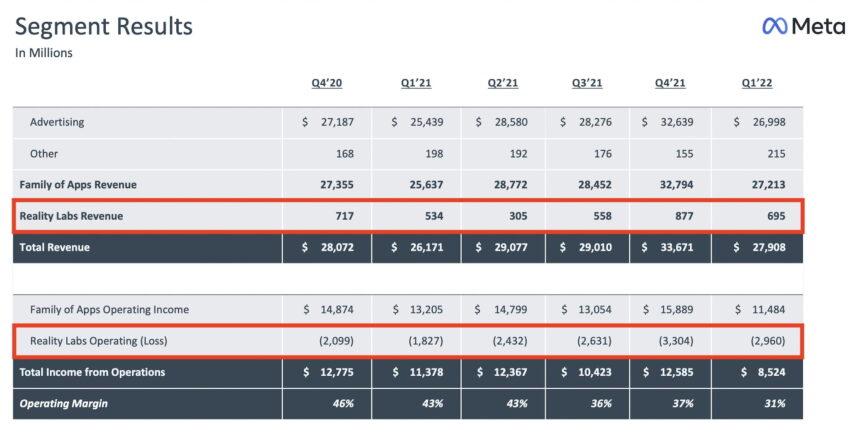 Meta’s financial results at a glance. Shown is the period between the fourth quarter of 2020 and the first quarter of 2022. I’ve highlighted the reality labs numbers. | Screenshot: MIXED

Probably to reassure investors, Zuckerberg announced cost-cutting measures. “Given our current business growth levels, we now plan to slow the pace of some of our investments,” Meta’s CEO said.

Elsewhere, Zuckerberg said it’s possible that continued macroeconomic or business uncertainty could force us to weigh in favor of shorter-term financial goals.

Remarkably, the VR headset apparently sold almost as well in the spring as it did after launch and the first holiday shopping season in 2020 when Meta recorded sales of $717 million. The fact that demand is still continuing after one and a half years should be positive.

On the software side, Zuckerberg went into detail about Horizon. Here, the focus will next be on expanding the community, and a web version of the in-house Metaverse platform will appear in the course of the year. Horizon fans should be able to interact with each other on any device or platform, according to Zuckerberg.

XR breakthrough: postponed until next decade?

The best way to experience Horizon, however, remains virtual reality and augmented reality, he said. Zuckerberg is holding out the prospect of an update to Meta Quest 2 that will integrate Horizon into the VR headset’s launch environment, making it more accessible. This probably means Horizon Home.

The ultimate goal of the Metaverse strategy is to monetize digital content created by users and creators. “We expect to be meaningfully better at monetization than others in this space, and we think that should become a sustainable advantage for our platforms as they develop,” Zuckerberg said.

On the hardware front, the CEO let slip that Meta is planning two to three generations into the future. Further, there is a separate team for each product, explaining the enormous amount of money spent on research and development. “But it’s not going to be until those products really hit the market and scale in a meaningful way and this market ends up being big that this will be a big revenue or
profit contributor to the business,” Zuckerberg said.

That event, however, may be a long, long time. “This is laying the groundwork for what I expect to be a very exciting 2030s when this is like – when this is sort of more established as the primary computing platform at that point.”