An interactive exhibition from Google brings celestial bodies into the living room with AR projections.

Some things are literally easier to grasp when they float spatially before your eyes. These include the three-dimensional planet models that Google has been offering since mid-2019: Since then, the company has been integrating 3D models into Google Search (more on that here), which can be projected into one’s own environment in their original size using AR.

This works in augmented reality with numerous animals, the human anatomy – and also planets of our solar system. Together with the U.S. space agency NASA, Google has put together a new digital exhibition called “Our Solar System.” An important focus is on the achievements of modern astronomy.

The presentation covers all planets orbiting our sun, excluding Pluto: The even more distant celestial body was finally stripped of its status as a planet in 2006.

In practice, for example, click on the topic “Our Solar System” linked below in a smartphone browser such as Chrome. This will take you to the digital exhibition of the same name, where you can scroll through explanatory texts, images, and embedded YouTube videos on various subtopics.

In between, you let some planets and historical objects of astronomy appear in the real world. After pressing the corresponding button, the AR object floats in the room: You can rotate and scale it freely on the smartphone’s camera image.

In addition to celestial bodies, historical space technology is also a topic. These include the International Space Station ISS and the Mars Perseverance Rover from the Mars 2020 mission. 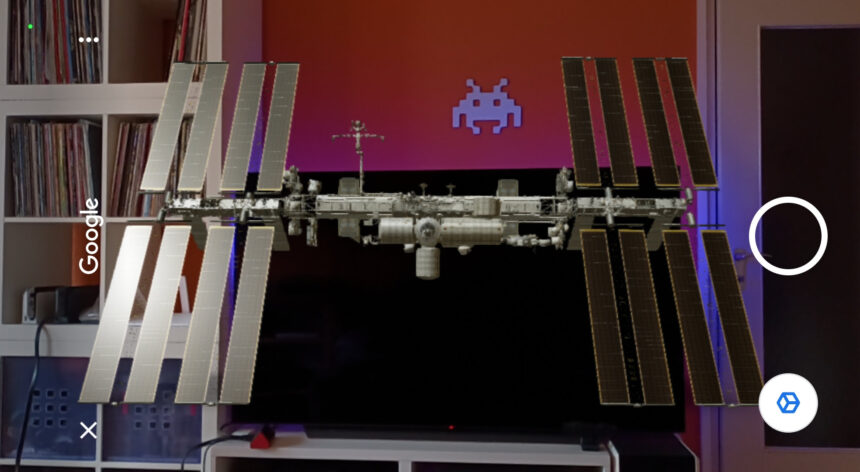 To make the journey more interactive, the AR objects will soon have annotations: Clicking on certain markers will then display important info panels directly in the AR image.

Google users are already familiar with such annotations from the search results in the browser: Similar information panels can already be seen above 3D models. These provide background information on the Apollo 11 mission, for example. The markers also explain essential technical elements of the James Webb Space Telescope, such as the characteristic honeycomb-shaped primary mirror.

Click here for the interactive exhibition “Our Solar System.

Follow us on
Google News
Read comments
POPULAR
1
Meta shows stunning full body tracking only via Quest headset
2
Playstation VR 2: Sony’s Shuhei Yoshida thanks Meta
3
Pico 4: All you need to know about the Quest 2 rival from Bytedance
4
Playstation VR 2: Are we in for a price shock?
5
Pico 4 Hands-on: Better than Meta Quest 2?