Streaming service Disney+ is releasing a movie with optional augmented reality experience on its own platform for the first time.

Disney offers an augmented reality smartphone app for the eight-minute short film. This allows users to experience a visual extension of the TV screen on their smartphone. The companion app is (currently) only available for iOS devices.

Through Apple’s ShazamKit technology, the AR app “hears” audio signals in the movie. When the app detects one of these signals, it prompts users to point their smartphone at the TV. A ten-second countdown then begins before the AR experience starts.

The short film that brings living rooms to life

Remembering follows a writer (Brie Larson), the middle of the creative process. A ringing phone distracts her, causing her to forget an important idea. Together with her inner child, she tries to retrieve the thought in a fantastic wonderland that represents her own imagination. 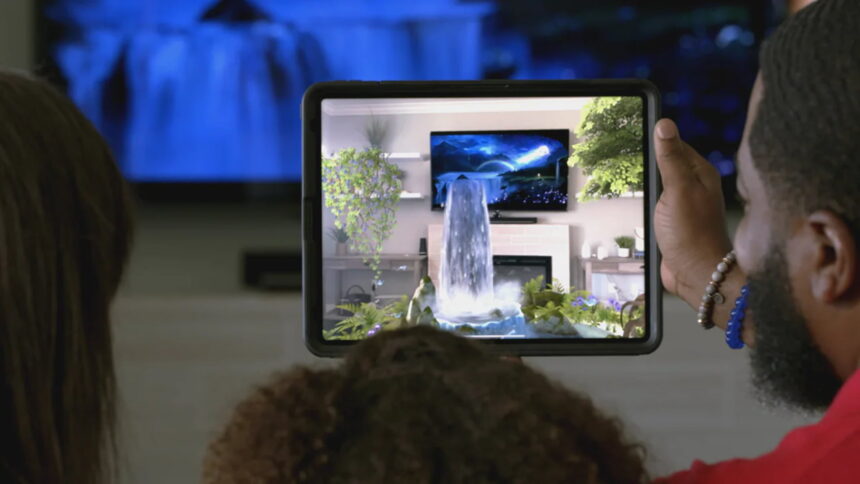 With the AR app, viewers experience a waterfall that continues to flow from the TV onto their own floor, a living forest including animal inhabitants created in the living room, and shooting stars flying in front of the sofa. The idea for the film came from director and screenwriter Elijah Allan-Blitz. The former kindergarten teacher wanted to depict the human imagination from the perspective of a child.

Allan-Blitz spent a total of two years working on the short film. A team recorded Remembering on a volumetric stage, using live projection mapping to project the film’s visual elements during shooting. The projections around them allowed the actresses to better immerse themselves in the fantasy world.

AR experiences are changing the way we consume content

Remembering is the first film of its kind, according to director Allan-Blitz. “We feel like this is part of the future of how humanity will interact with entertainment,” Allan-Blitz said.

The AR experience moves away from the typical passive streaming experience and allows for a deeper way to engage with it. “That makes it something that will be remembered on a deeper level than just something you watch. It’s actually something you did,” said Allan-Blitz.

While Remembering is Disney’s first AR project for the living room, the company has been experimenting with the technology for some time. In 2021, a Disney attraction using augmented reality launched on a cruise ship. The Mickey Mouse company is currently silent on further augmented reality plans. It is also not known whether Disney will bring Remembering and the associated AR app to other platforms and markets.