The VR hit Demeo recently got a mixed reality mode. Now the studio has confirmed to work on hand tracking support.

In the turn-based tabletop role-playing game Demeo, you choose one of six character classes and explore dungeons full of treasures and enemies alone or with up to three friends.

On October 25, Demeo received an update for Meta Quest 2 and Meta Quest Pro that lets you place the game board on your living room table or other surfaces. Thanks to the passthrough update, you can keep an eye on the physical environment while playing, even in color with Meta Quest Pro (see video below).

Coinciding with the release of the mixed reality mode, Resolution Games announced that more mixed reality features are in development for the Quest platform, including hand tracking.

This would be a useful addition, after all, Demeo simulates tabletop games where you handle cards and move your game pieces around the board with your hand.

The question is whether the hand tracking technology is good enough. In Demeo, even the smallest mistakes are punished severely, and it would be quite frustrating to lose a game due to inaccurate hand tracking. Resolution Games has not yet commented on which Quest headsets will support hand tracking, how exactly the feature will be implemented, or when it will be released.

What other mixed reality features could the studio be referring to? In a tweet, Resolution Games apparently teased a local multiplayer mode. This will be made possible by a new Quest API called Shared Spatial Anchors.

Sip your coffee (and actually see where to place it) and slay monsters as you descend through the dungeons. Demeo is now available in mixed reality on Meta Quest 2 and Quest Pro via Passthrough! ✨ pic.twitter.com/shep3LEy0O

According to the video, in local multiplayer you can gather with family or friends around the same virtual game board and play Demeo together on location, provided of course that all players have a compatible headset. However, the local multiplayer mode has not been officially confirmed yet. 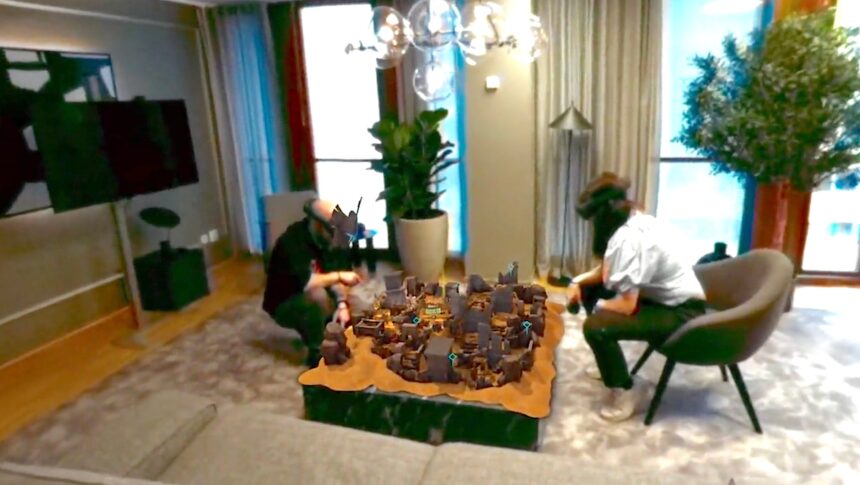 Demeo: A game that grows and grows

Demeo is one of the most successful games on the Quest platform and a prime example of a live service game: since its release in May 2021, Resolution Games has added three new adventures and two new character classes for free. Another unannounced adventure is planned for this year and a PVP mode for 2023.

Earlier this year, the studio expanded the game to include the so-called Heroes’ Hangout, a virtual D&D basement where Demeo fans can meet, play, or paint tabletop-style miniature figures together.

In April 2022, a 2D version of Demeo was also released for the PC, offering crossplay with VR platforms. This allows you to play Demeo with friends who don’t own a VR headset.

The VR version of Demeo is available for Quest and Pico 4, as well as for PC VR. In 2023, Demeo will also be released for Playstation 5 and Playstation VR 2.