Beat Saber: The early days of the most successful VR game of all time

Beat Saber is the most important VR game of the last four years. I met the developer before its runaway success.

Beat Saber is many things: an iconic rhythm game, a pillar of virtual reality, and a cultural phenomenon.

In the spring of 2018, that wasn’t the case. In March, I traveled to the Game Developers Conference in San Francisco and met one of the game’s two creators, Ján Ilavský, purely by chance.

Beat Saber had not yet been released on Steam, and Ilavský attended the developer conference to promote the VR game. I remember how the young Czech developer struck me: intelligent, likeable and modest, and that he liked to laugh a lot.

Two weeks before that, the two-person studio, which was still operating under a different name at the time, released a mixed reality video on YouTube that went viral and was viewed many millions of times.

Word of Beat Saber spread quickly, and when I got to try out the VR game on site a little later, Eurogamer’s Chris Bratt was also on hand to interview Ilavský for the site’s YouTube channel. Beat Saber had to be something special because it was already reaching gaming spheres outside the VR niche before its release, I figured.

Despite initial signs: Ilavský did not foresee the phenomenal success of the VR game. No one did. How could they? Virtual Reality was in trouble in 2018. VR games were a dime a dozen, but almost no one played them. What difference could another indie game from two developers make?

“Your game is much better than ours!”

I met Ilavský a third time then, and like the first time, again by chance. I had an appointment at Neat Corporation and met the development team in a hotel room to try out a then much more popular VR game: the soon-to-be-released Budget Cuts. Coincidentally, Ilavský was also invited at the same time. 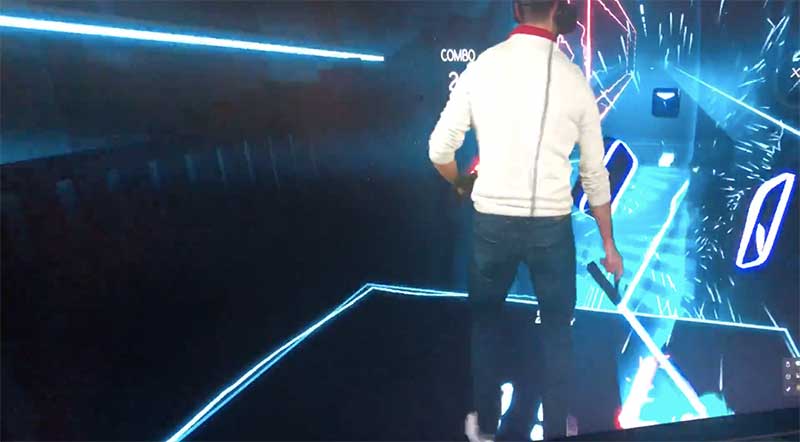 Playing Beat Saber for the first time, at GDC in March 2018. | Image: MIXED

The base stations were set up in the hotel room, and soon we were ready to go. When Ilavský and I finished Budget Cuts, he had the development team try out Beat Saber.

It was enthusiastically received, and I remember someone saying, “Your game is much better than ours!” That also stuck in my mind: an early sign that Beat Saber was something out of the ordinary.

Beat Saber is a phenomenal success

The rest is history. Beat Saber will be released in Early Access in May 2018 and a year later for Meta Quest 1.

Since 2018, Beat Saber has sold more than four million copies (as of February 2021) and generated $100 million in revenue on the Quest platform alone (as of October 2021). It dominated the Playstation VR game charts for years. At the end of 2019, Facebook bought the newly founded studio Beat Games for an undisclosed sum.

Ilavský and his co-founders Vladimír Hrinčár and Jaroslav Beck are millionaires today. But more importantly, they created a game that contributed significantly to the success and popularity of virtual reality and became the flagship of an entire industry.

To celebrate its fourth birthday, the studio is releasing remixes of the songs “100$ Bills” and “Escape” that started the Beat Saber cult. They are available now on all VR platforms that offer Beat Saber.